When Rob McCord spends his money, he tries to do so in McCordsville. However, that limits his grocery, restaurant, shopping and other retail options. So, he often travels outside of town for specific consumer goods and services.

As a resident and pastor of Outlook Christian Church in McCordsville, McCord recognizes the importance of local spending but believes there could be more options in the Town of McCordsville, which has an approximate population of 7,500.

“When we have the option or when we can, we try to choose McCordsville businesses, but because there’s only so many, we will definitely end up finding ourselves across 96th Street in Hamilton County or across Carroll Road into Marion County,” he said. “But we much prefer (to), and do when we can, (patronize) business in 46055.”

When McCord does spend money out of town, it’s usually at restauarants. Although there are local restaurants in McCordsville, like Trax BBQ and Scarlet Lane Brewing Company, options are few.

“When it comes to that, and outside of Meijer, there isn’t a lot of retail in terms of any number of things, (such as) home goods, hardware,” he said.

Town officials recognize the need for an identity. They are almost finished with the McCordsville Town Center plan, an effort to begin a downtown-environment project on 150 acres at the southeast quadrant of U.S. 36 and Ind. 234. Plan development was recently put on hold so the town can complete a market analysis identifying what shoppers want and how to attract them to McCordsville,  and how to encourage McCordsville residents to spend locally.

“We think we will not probably pick (the plan) back up until June,” Town Manager Tonya Galbraith. “We are 80 percent done with the plan, but we want to have it completely finished and confident it’s the right plan before we let it go because developers and builders don’t want uncertainty.” 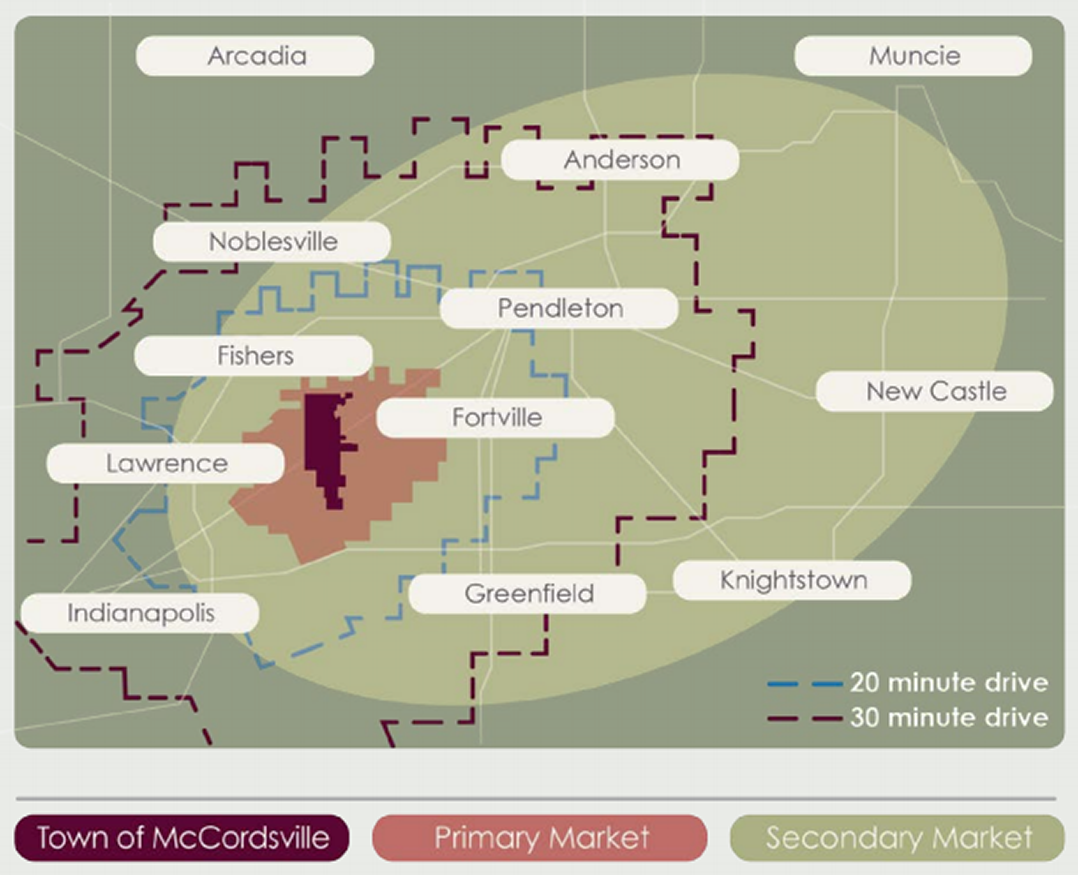 The market analysis study identified a primary market and a secondary market, where dollars may come from if McCordsville were to bring more retail options to town. (Submitted image)

The market analysis study was commissioned and released in January. It examined the primary market, which is the area within a 10-minute drive from West Broadway and 600 West. It includes the entire Town of McCordsville, parts of the City of Lawrence and the Town of Fortville.

The study found that due to online retail trends and McCordsville’s proximity to major retail markets in other cities, the town center “will need to develop unique, experiential retail and the feeling of a destination in order to draw consumers from their established behavior and patterns.” It suggested anchors of the town center be restaurants and grocery options. Once those are established, second- and third-tier retail, such as department stores, health and personal care services and beer, wine and liquor stores, would follow based on foot traffic.

‘ALMOST ANYTHING WILL BE SUCCESSFUL’

Town officials sought resident input from a survey in the of fall 2018. Of the 870 people who took the survey, 80 percent lived in McCordsville. Results showed 81 percent of respondents claimed they eat out one to three days a week, and 94 percentsaid they drive more than 10 minutes to dine at a good restaurant, with 87 percent of respondents crossing into Hamilton County to dine.

Moreover, 73 percent of residents travel outside of McCordsville for groceries, according to the survey.

The market analysis study found that only 41 percent of retail demand is being met within the study’s primary market. It also revealed that the town’s lack of amenities and restaurants were top reasons people don’t move to McCordsville.

“Basically, the bottom line is almost anything will be successful in McCordsville because we don’t have anything,” Galbraith said.  “You have to have a feeling for what sort of needs there are in a town center before you can plan completely. The market analysis was done to tell us where our leakage is. The leakage is where people go outside of McCordsville to spend money. We are leaking money for other retail purposes or commercial purposes because they’re not here.”

The full market analysis study can be viewed at nextstopmccordsville.org/egov/documents/1548261293_47445.pdf. 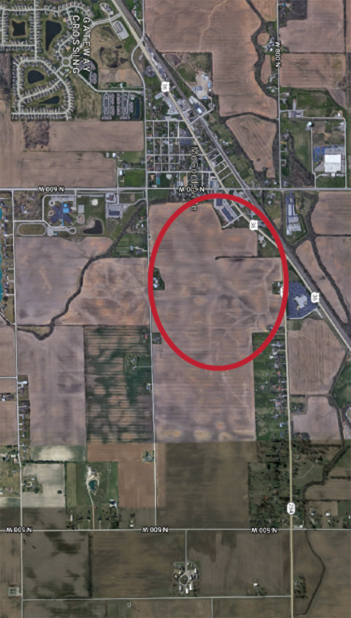 The town center is planned for 150 acres at the southeast quadrant of U.S. 36 and Ind. 234. The final plan is expected to be released this summer. (Submitted image)

As a part of the McCordsville Town Center Plan, Galbraith said road concerns will be addressed. The market analysis study suggested in order to be successful, the Town of McCordsville may want to consider hiring more town staff to keep up with economic development. It also  identified a critical issue with traffic flow and suggested McCordsville focus incentives and marketing efforts on restaurants or grocery stores first.

“We will probably have to provide incentives for developers to come in and help with sewer or stormwater or roads, those kinds of public improvements,” Town Manager Tonya Galbraith said. “That’ll all be part of the plan. We don’t have those concept designs done yet because we have to make the decision about where the roads are going to go (within the town center).

“We won’t ever say this spot is for a grocery story and this spot is for a clothing store. We will never tie peoples’ hands like that, but in the Town Center Land Use Plan, there will be specific areas for residential, commercial or whatever.”