You are at:Home»Current in Noblesville»Noblesville Business Local»Virtual reality comes to Noblesville

A new virtual reality business has opened at Hamilton Town Center, a first for Hamilton County.

Derezzed VR was opened last month by 24-year-old Colin Snyder, who said he first became interested in the business of virtual reality during his time at Ball State University. 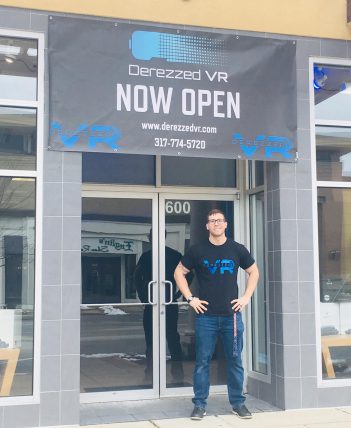 “I was following the development of the Oculus, one of the first VR headsets,” Snyder said. “I had the idea back (in 2013) that it might be a worthwhile investment to put some of these pieces of technology together and provide a place and a platform for people to be able to use it because it’s not really affordable as an at-home service.

“At the time, the tech really wasn’t in a position to bring it all together and make it feasible. so after I got my graduate degree, I went back and revisited the idea and went forward from there.”

A Fishers native, Snyder returned to the area after college and lives approximately 5 minutes from the business.

“It was an easy decision,” he said. “If you look at the demographic data of the area, there’s a median age of like 33 to 34, with a median household income of $100,000 to $120,000, so people in this area have the disposable income for entertainment like this.”

Derezzed VR offers a membership program for frequent visitors, but regular prices are based on time slots – $15 for 15 minutes, $25 for 30 minutes and $40 for an hour.

“We have five room-scale bays, and essentially the room-scale bays are sectioned off and each have about 70 square feet available for the patrons, and we’re completely wireless in those areas, so they can move around easily in the virtual environment,” Snyder said. “We also have two stationary VR bays set up, so those offer things like exploring nature, roller coaster roads, exploring the Titanic, things of that nature.”

Two more bays are planned for spring and will be light simulators and racing simulators.

“There is just one headset per station, but what people do is come in groups of two to four, buy an hour or two and then share the headset,” Snyder said. “We have TVs mounted over each one of the bays to allow the people who are waiting for the headset or who are part of the group to watch and see what the other person is doing.”