You are at:Home»Current in Carmel»Carmel Community»Friends reflect on First Lady of Golf Architecture’s impact

There is good reason why Alice Dye was dubbed the First Lady of Golf Architecture. 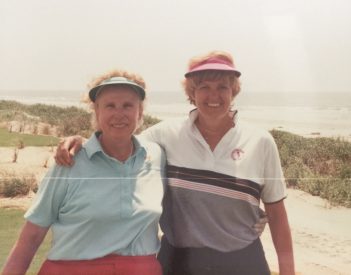 “Alice was an amazing woman, a great golfer and a better friend,” said Nancy Fitzgerald, a top amateur golfer herself. “She was a giver. She gave everything she could to Pete in designing ideas and development of ladies’ tees, so women could play the game and enjoy it. That was her big concern, that people love the game. She changed golf for women, for sure.”

The Dyes, who married in 1950, have a home on the 18th hole at Crooked Stick. Fitzgerald and her husband, Ed, have lived two houses away for the past 10 years. The longtime friends would often socialize and golf together.

“She was a great competitor,” Fitzgerald said. “She won many, many tournaments but was known for the way she played. She had great course management and focus. She expected to win. When she did, she was a humble winner and a gracious loser. She was the epitome of what we all strive to be. When you talk about the true legends of the game, she is definitely high up on the list.”

Tony Pancake, Crooked Stick director of golf and club operations, said he went with the Dyes when they designed the course at French Lick.

“They were a team,” Pancake said.

He said the Dyes would often ride the golf cart around Crooked Stick taking notes.

“She had a lot of suggestions for Pete on how holes should play, where the women’s tees should be, just so that all players could enjoy playing the course,” Pancake said. “Another thing important to Alice was how to get in and out of bunkers. If someone was in their 70s, could they physically get out of the bunker? She saw some things that your normal golf course architect wouldn’t be thinking about. She was always thinking about all golfers, not just elite players.”

Dye is survived by Pete, 93, who suffers from memory issues. Their sons, Perry and Paul Burke (P.B.), are both golf course architects.