You are at:Home»Current in Geist»Geist Cover Stories»Salt of the Earth: New cave houses 9 tons of Polish pink salt for holistic health

Stefanie Patterson offers many avenues at Indianapolis Salt Cave in Lawrence to foster overall holistic health, the most unique of which may be an indoor salt cave with 9 tons of Polish pink salt.

Salt therapy dates to the 1800s when a Polish physician noticed workers coming out of Polish salt mines weren’t getting sick and their skin was very healthy. After research, the physician credited the salt in the mines.

Two centuries later, some Polish salt mines are open to the public as healing centers. Patterson and her boyfriend, Danny Spiczenski, co-owners of the Indianapolis Salt Cave, imported the Polish pink salt to use in the flooring and along the walls.

“We had a guy from Poland come and build our cave who used to grow up going to the salt mines,” Patterson said. “He built it and helps us maintain it, and it is just like an actual salt mine would be. That’s why it feels cooler in here. It’s not warm. You won’t be sweating. It’s truly recreating that environment of that Polish salt mine.”

Water cascades In the Indianapolis Salt Cave truly create the cave effect. Without water, the cave would just be a salt room. Blankets are available for patrons. Up to 10 people can sit in the cave at a time.

In addition to the salt features, a halogenerator allows patrons to experience halotherapy, which is breathing in dry salt aerosol. The halogenerator is recognized as a medical device in Europe, but Patterson said it is not yet recognized as such in the United States.

“It uses infrared waves from panels all over the sauna to penetrate (the) body and heat it from the inside out,” Patterson said. “It helps with circulation and helps with any inflammation and warming your internal organs.”

The hand-and-foot detox removes toxins from the body through the hands and feet. Patrons put their hands and feet on heated Himalayan salt rocks. The treatments is $30 for 45 minutes.

“Basically, what it’s doing is, salt is pulling out toxins and heavy metals from your body through sweat from the hands or feet,” Patterson said. “It’s also helping replenish the body with 84 different minerals it has in it. A lot of people are mineral deficient and don’t even realize it. This is helping get the body to optimal health.”

Patterson said the hand-and-foot detox can be used for joint pain, arthritis, inflammation or carpal tunnel.

Since opening nearly a year ago, Patterson said business has been robust, especially as patrons learn more about the benefits.

“It’s a lot of education. This is not a typical thing people know about. It’s not something people really understand when they come here,” Patterson said. “I think the whole process since opening is really educating people on this type of holistic treatment and how to actually heal your body with salt.” 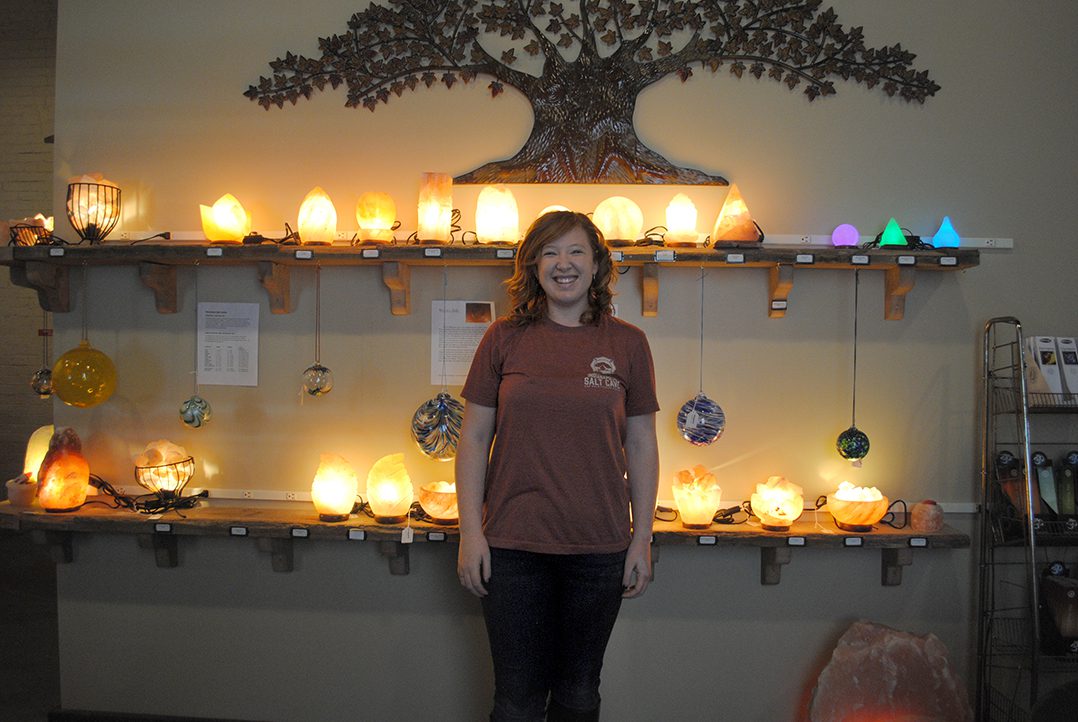 Stefanie Patterson and her boyfriend, Danny Spiczenski, opened the Indianapolis Salt Cave approximately one year ago.

Paying homage to its history

The relatively new Indy Salt Cave in Lawrence is in a building that was a firehouse from 1903 to 1995, when Fort Benjamin Harrison was decommissioned.

Indy Salt Cave co-owner Stefanie Patterson said she and boyfriend co-owner Danny Spiczenski wanted to pay homage to the firehouse by hanging fire hoses from the ceiling and incorporating a fire station look in the Indy Salt Cave logo.