Carmel has long been known for its high-profile events, with festivals like CarmelFest, the Carmel International Arts Festival and Porchfest drawing huge crowds from the city and beyond.

In addition to their popularity, the events typically share another luxury: warm weather. Several years ago, city leaders realized they weren’t providing many opportunities for residents to connect during the colder months of the year. They decided to change that.

In 2017, the city helped launch the Carmel Christkindlmarkt, a German-inspired holiday market in the Center Green. The Ice at Center Green opened at the same time and remains open through March as the site of several special events. The city considers both to be huge success stories.

“We’re trying to get people to battle against that wintertime depression, get outside, hang out with your neighbors, try some ice skating or come to one of these events, like the ice festival,” said Dan McFeely, a spokesman for the City of Carmel. “Not everyone is like the snowbirds who fly off to Florida for the wintertime. A lot of people stay here, and they want to participate. The ice rink was really the drive behind the decision to start taking a fresh look at some events we can do in the wintertime.”

Attendance at the second Carmel Christkindlmarkt more than doubled from its first year, with an estimated 328,000 people attending the Christmas market during its five-week run. In 2017, the collective crowd was estimated at 150,000.

Organizers made several changes this year to accommodate crowds, including an expanded layout, seven additional huts and increased product orders.

In its first year, organizers were overwhelmed by larger-than-expected crowds that led to long lines and shortages of popular items, such as boot-shaped Glühwein mugs. In the second year, they planned for bigger crowds.

“Carmel’s a great place to visit,” he said. “We have people visiting from all over the country, and the Christkindlmarkt proved that. We had thousands of visitors from other places.”

He said a geofence captured area codes from across the nation, and he encountered visitors from several different states while visiting the market.

Catey Etner, a resident of Winona Lake in northern Indiana, has visited the Christkindlmarkt both years it’s been open. She previously lived in Paris and was excited to experience a taste of Europe a little closer to home.

“Even though we live two hours away, we do hope to make this an annual tradition,” the mother of seven said. “Carmel has such a charming atmosphere, and the market actually felt very similar to a festival we went to in Brugge, Belgium, in 2005. We will definitely be back.” 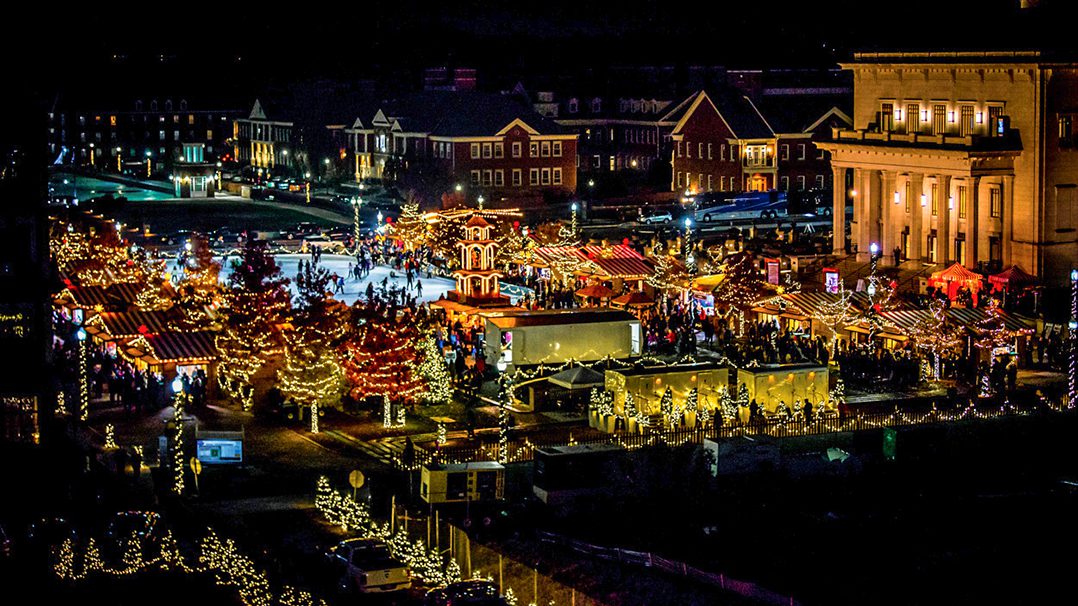 The Ice at Center Green also has been a popular destination in its second season, with 23,170 skaters between opening day Nov. 19 and Dec. 31, 2018. It will remain open through March 10.

The rink, located where the Carmel Farmers’ Market sets up shop each summer, has played host to a variety of community events, including the recent Festival of Ice, which expanded to three days this year and brought crowds to Carmel despite a cold, snowy weekend.

Upcoming events at the ice rink include two sensory-friendly skates, a Valentine’s Day event and the inaugural Carmel Winter Games, set for Feb. 21 to 23. The games will kick off Feb. 21 with a skate night with the Indy Fuel hockey team. The following evening, representatives from the Carmel Police Dept. and Carmel Fire Dept. will compete in the Hometown Herolympics, featuring human curling, an ice-trike relay and human hungry, hungry hippos. Teams from local businesses will compete in the same events the following day.

“Big kids playing with toys on the ice is a good way to put it,” McFeely said.

Teams interested in signing up for the games may contact Valery DeLong at vdelong@carmel.in.gov for more information.

Carmel’s efforts to become a winter destination have made an impact on local businesses, according to Hamilton County Tourism CEO and President Brenda Myers. 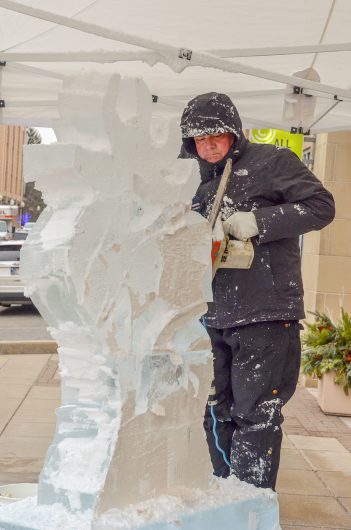 Michael Stoddart of Kentucky-based Lexington Ice Sculptures participates in Carmel’s Jan. 11 Festival of Ice on Main Street in Carmel. Artists could be seen working on ice sculptures throughout the Arts & Design District during the evening. Visit facebook.com/currentincarmel for a video. (Photo by Sara Baldwin Schatz)

“The growth in quality holiday and winter offerings in Carmel and Hamilton County has created more demand for winter visitation than ever before and has reshaped how we promote the county as a year-round destination,” she said. “We no longer think of our travel season as just late spring through fall.”

According to STR, a company that compiles hotel data, hotel traffic in Hamilton County increased 3 percent from 2017 to 2018 on the weekend nights between Thanksgiving and Christmas. Weekend room demand increased six of the eight weekend nights between Dec. 1 to 23, 2018, with two-thirds of the additional rooms sold in the Carmel/Westfield U.S.-31 corridor.

McFeely said the addition of the winter events have been beneficial to nearby businesses by bringing in additional customers and providing a desirable place for employees to live.

“The real reason we do this is it’s one more quality-of-life element that helps us attract companies and people who can help fill those jobs in those companies,” McFeely said, adding that many young workers could choose to live anywhere. “We want to come up with these kinds of events that will get them to appreciate where they live.”

The Ice at Center Green will host several events in the coming weeks. They include: