You are at:Home»Current in Geist»Geist Cover Stories»Healing through the arts: Geist-area woman believes in creative outlets as therapeutic efforts

Kimann Schultz is a firm believer in the equal expression of positive and negative emotions through the conduit of art.

“As a society and as individuals, we can look at art as a way to empower ourselves and vent, gain confidence and express good things and bad,” she said. “The bad expression is just as important, if not more so. It’s an expression of things we are already dealing with. It’s a positive way people can share things without destroying things.”

Schultz, who serves on the board of directors for the Kurt Vonnegut Museum Library, the Indianapolis Opera and the Fashion Arts Society, believes schools should create strong, arts-based programs, which may lead to less violence.

“If people are expressing themselves with a firearm, people don’t have a choice to opt out,” she said. “Art as an expression is still within the bounds of freedom to pursue happiness, which means if you don’t like it, you don’t have to consume it. That’s the core of my support, because I personally understand the cathartic effect of creative expression.” 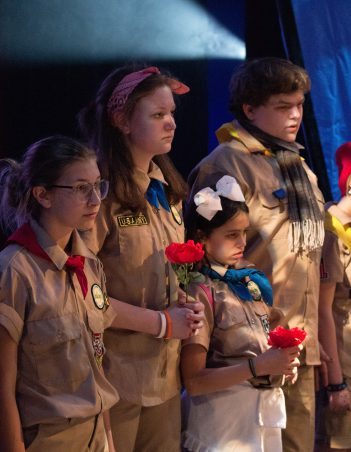 Schultz encourages the arts as a form of expression in her own home “in old Geist” near Fall Creek Road and 71st Street. Her 14-year-old daughter, Hannah, is involved in the Young Actors Theater. Schultz described her daughter as an introvert and said the YAT has helped her break out of her shell.

“The Young Actors Theater has really been a place for her to push herself, to come outside of herself,” Schultz said. “It’s helped give her confidence. These become outlets for the kids themselves. I would love to see a whole school built on a Young Actors Theater curriculum.”

“Five years ago, we switched into what’s called self-empowerment theater, and that was just really geared in getting kids to become empowered through the process of theater,” said Wade, a Fishers resident.

YAT serves kids from 55 different zip codes. It is based in downtown Indianapolis.

Wade said YAT helps kids develop self-confidence. The curriculum is focused on the 90 percent of students who won’t pursue theater as a career.

“We look at, ‘How do we serve those 90 percent of kids really well?’” Wade said. “The No.1 way to do that is an empathy class that teaches you how to see situations differently and the top (class is) on becoming an empowered individual. It’s all geared towards expression.” 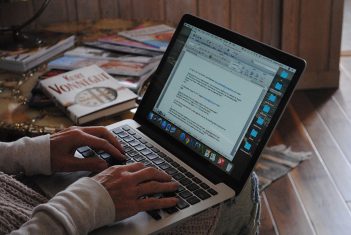 Kimann Schultz has written several articles for the Huffington Post on using arts as a non-violent means of expression. (Photo by Anna Skinner)

Schultz has written several articles about using the arts as a non-violent means of expression for the Huffington Post, specifically its connection with school shootings. Schultz said the if the mother of the Sandy Hook Elementary School shooter had empowered him with art, maybe the shooting wouldn’t have happened.

“If that kid had the option for Young Actors Theater, maybe he could’ve explored himself as a writer, a poet, an artist. It may have provided him with a key,” Schultz said.

“(His novel) ‘Slaughterhouse 5’ was a way he dealt with his service in World War II,” Schultz said. “The literary arts were a way people could protest the violence of war and understand the volatility of destruction.”

“We work with schools that don’t necessarily have an arts-based curriculum, but we work at Salem Leadership Academies on the far east side and are their full-time drama program.  Every kid takes YAT during the day,” Executive Artistic Director Justin Wade said. “We are always looking at having relationships with schools. We are so non-traditional and have really specific ideas on theater, so we are really strategic and picky about who we work with and only work with people who take us on in full.”