Lt. Cameron Ellison said the the new headquarters is a good fit for the task force and its mission.

“I think it’s more comfortable. I think what we had as far as functionality was about the same, but a couple of good things about being in this space is certainly the infrastructure is a bit better,” Ellison said. “We adapted to the other place. This place was built for us.”

Previously, the task force was housed in a city-rented building at Moore and South streets. The owner of the building was selling it, which prompted the need for a new space.

Police officers typically have several duties they are required to accomplish within their job description, but Ellison said task force members have one mission.

“All we do as a group is child exploitation cases. The way it’s generally organized is we are an affiliate of the Internet Crimes Against Children Task Force,” Ellison said. “ICAC is a national organization out of (Washington,) D.C.”

There are 66 ICAC-affiliate offices throughout the U.S. Although Hamilton County’s is based in Fishers, the task force follows leads around the world.

“The stuff we do is stuff you just couldn’t imagine sometimes,” Ellison said. “Our function really is to follow images of child sexual abuse with people who either trade it for monetary purposes or social-networking purposes.”

“The type of work our investigators are managing every day is extremely difficult but so critical to ensuring a safer world for our children,” Fadness stated in an email to Current. “While sitting in Fishers, these officers are solving crimes around the world, and bringing justice to the victims. I’m grateful every day to have them as part of the Fishers Police Dept.”

Recently, the task force assisted Homeland Security Investigations with a case that began in southern Indiana. The task force assisted Homeland Security with executing a search warrant. There, they discovered a man who was running a social networking site where people produced child pornography. That led to a two-year operation which turned into an undercover case and led to the discovery of victims in Louisiana, Texas, Ohio, Canada and South Africa.

“It was just a pretty powerful thing to be part of that and finding all those people who are otherwise not known,” Ellison said. “It was kind of the worst of the worst involved in that.”

This year, all involved were sentenced. A man in South Africa received eight life sentences plus 140 years, the longest sentence in Africa for a crime of that nature.

At least 11 victims were discovered from the case. Several had reached adulthood by the time operation was complete. 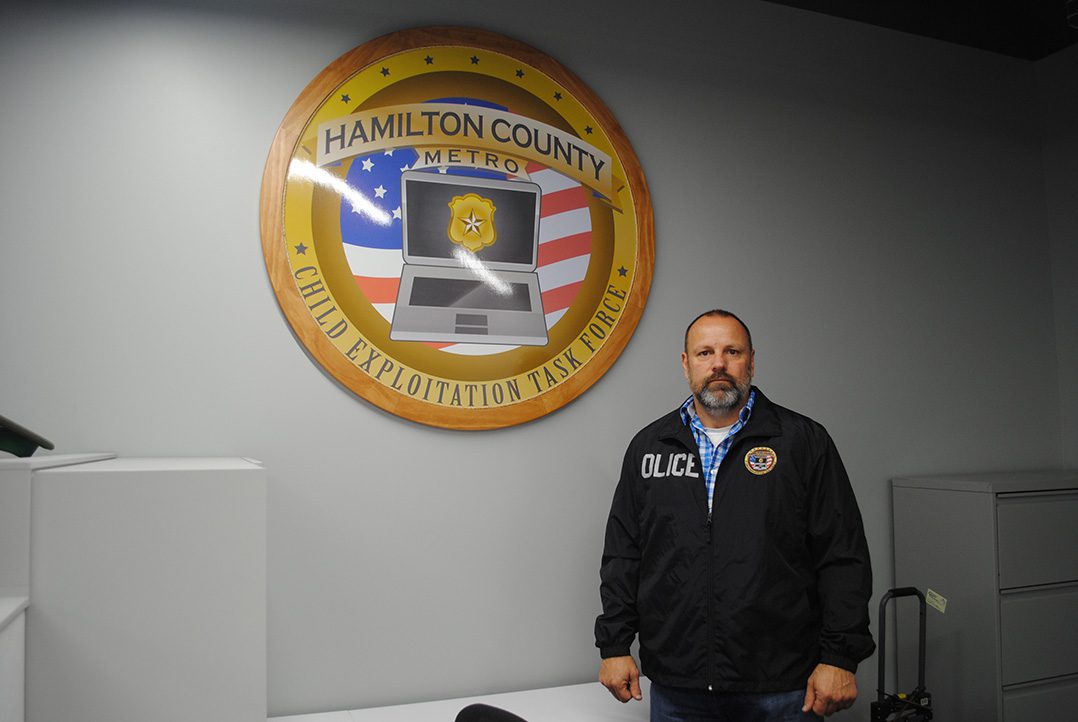 Lt. Cameron Ellison said the internet should be considered another door or window to everything good or bad.

A majority of the time, ICAC cases take investigators online, which can be a challenge.

“Our job takes us on the internet on most cases. We are following images traded over the internet, and in most cases, someone is storing them in digital storage like Cloud storage or transporting them from one person to another on some sort of social network,” Ellison said.  “Because of the internet, we end up sending leads all over world and we get cases and leads from all over the world.”

Jurisdictional boundaries, which are usually prevalent in many law enforcement organizations, disolve in ICAC investigations.

“The internet is just a unique challenge for us as law enforcement because the jurisdictional boundaries really go away because these things are transferred through the internet to every place in the world,” Ellison said. “It’s very difficult for any one agency to investigate a case on its own, so it becomes necessary for this to exist.”

“Because we are involved with ICAC, we get those leads through the state police and through the International Center for Missing and Exploited Children,” Ellison said. “Cyber tips get pushed out to ICAC, (which then go to) whatever ICAC has control, whatever area it is coming from.”

Ellison said it’s one of the best-organized efforts he’s seen.

“It’s all focused on a single issue, and we are all connected, so if I have a lead or an investigator has a lead that ends up going to California, we know exactly who to communicate with,” he said.

The task force is comprised of employees from Fishers and Carmel police departments and the Hamilton County Prosecutor’s Office. It works closely with Homeland Security Investigations, state police and the U.S. Attorney’s Office.