You are at:Home»Current in Carmel»Carmel Cover Stories»Firkin out: Union Brewing Company goes all in on beers on cask

Nathan Doyle said the idea for Union Brewing Company stemmed from a time when he and his friends couldn’t find an ideal place to hang out and drink beer.

“There were three partners in the beginning, and two of us lived here in Carmel and we didn’t have any place to hang out that we liked,” Doyle said. “There was no really relaxed place to go have a beer.”

Doyle was homebrewing at the time, so he and his friends pooled their money to see what they could do. Doyle, however,  said they didn’t want to open a regular brewery. Instead, they opted for firkins, or cask-style beers.

“At all the breweries we have been to combined, which was hundreds of breweries, always the best beer that any of them had was always on cask,” Doyle said. “So we thought, ‘Why not just do all of our beers on cask?’”

A tap beer is force-carbonated, like a soda. In a cask beer, the carbonation process occurs naturally.

“It does take a little bit longer,” UBC head brewer Matt Pennington said. “The actual brewing and fermenting process is all the exact same.”

To make a firkin, after the beer has been brewed and fermented, it is stored in a 10.8-gallon cask along with a sugar that the beer yeast consumes.

“We put flat beer in with sugar where the yeast in the beer can eat, and that turns into a little more alcohol and gas — CO2,” Pennington said. “There’s nowhere for that gas to escape to, so that gas absorbs into the solution and carbonates itself. Instead of forcing CO2 into a beer to carbonate it in a standard keg, it takes two or so weeks for a beer to self-carbonate.”

Firkins derive  their name from the vessel the cask beer is stored in, not the beer itself.

“It’s the original way beer was made, and it’s still served that way in a ton of English pubs,” Pennington said. “It’s just not a commercially viable way to make beer in the United States.” 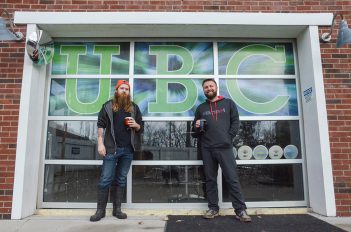 Union Brewing Company head brewer Matt Pennington, left, and owner Nathan Doyle pause for a drink on their back patio, which faces the Monon Greenway. (Photos by Sara Baldwin Schatz)

Pennington said he believes UBC is the only brewery in Indiana that brews strictly firkins, and he said only a handful of breweries across the U.S. do so.

Doyle said firkins have more of a creamy mouthfeel and not as much of a bite from the carbonation. He said nitro brews try to imitate what a cask beer is, and some even call firkins the “craftiest of craft beers.”

“With its delicate carbonation, there’s no place to hide off flavors,” Doyle said. “So, it’s the purest tasting beer you can get as far as everything that goes into it is everything you taste when you drink it.”

Many breweries don’t go the firkin route because the expense is higher than tap beer, and firkins aren’t easily distributable. A piece of equipment called a beer engine is required to pour the firkins, which costs approximately $500. A normal beer tap may only be $100. A beer engine is a pump that draws the beer out of the cask.

“We can’t brew our beer in a cask and then take it to any brewery or restaurant that wants to sell it,” Doyle said. “You have to have specialized equipment to dispense it. There’re very few bars that have those. Probably less than six bars in Indianapolis have those.”

The two partners who launched UBC with Doyle in 2012 have since left the company, and he brought on another partner, Cary Hudson, in 2015.

For more on UBC, visit unionbrewingco.com. 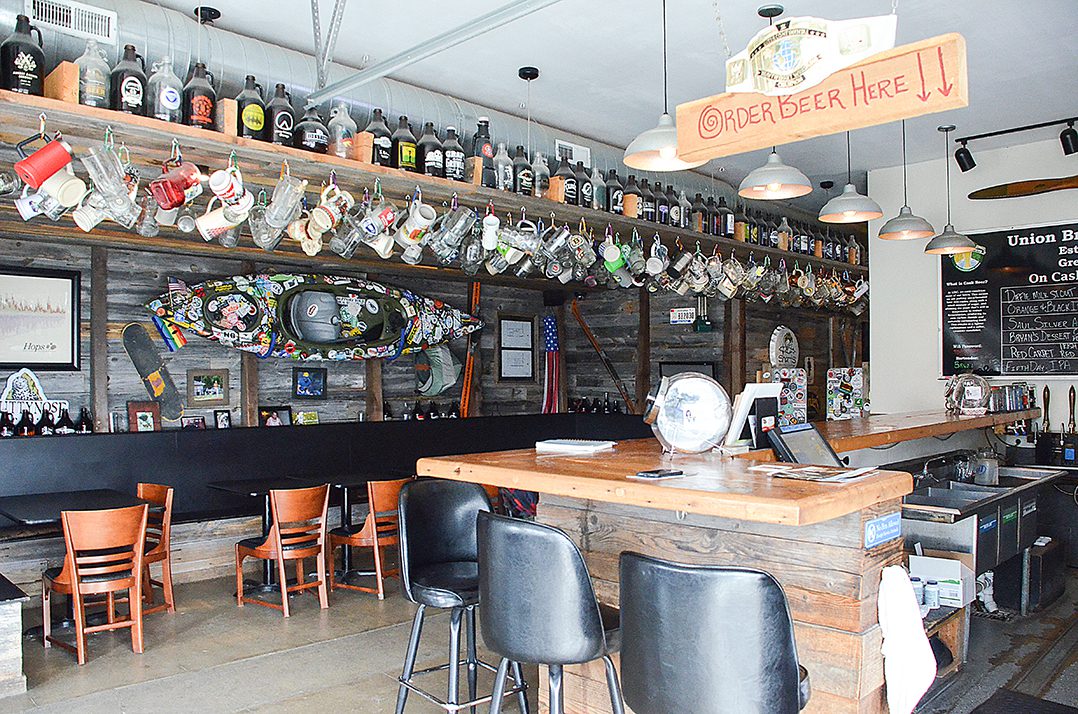 UBC’s interior has the aesthetic of a homey lodge, featuring rows of growlers and glass mugs, a kayak covered in stickers and large garage doors that let in plenty of light.

Day 1: A 10-hour process starting with barley and grains. By the end of the day, the brewer has a bunch of what Union Brewing Company head brewer Matt Pennington calls sugar water.

Day 2-12: The sugar water goes into a fermenter with yeast and sits for anywhere from 5 to 10 days. Then the brewer drops the temperature, which allows the solids to fall out of the liquid. Liquid is pulled and stored into casks.

Day 13-27: The beer is stored for two weeks in a cask to self-carbonate. Typically, Pennington makes enough beer for 11 to 15 casks at a time.