You are at:Home»Current in Fishers»Fishers Cover Stories»Rebuild and restore: Hamilton County acquires only remaining combination post truss bridge in the world

Hamilton County knows what goes into restoring a bridge.

The county connected three historic bridges at Strawtown Koteewi Park in 2016, and it soon will begin work on another. It recently acquired the Bell Ford Covered Bridge in Jackson County.  Hamilton County and the City of Fishers will work to rebuild the covered pedestrian bridge near the county’s Geist Park.

The restored bridge will be adjacent to Florida Road between 104th and 113th streets, spanning Fall Creek.

Hamilton County Commissioner Mark Heirbrandt said the project originated when a Luxhaven neighborhood resident was concerned after learning the City of Fishers wanted to construct a pedestrian bridge through the neighborhood.

“I originally got a call from a resident in the Luxhaven area who said, ‘I have a concern about a pedestrian bridge the City of Fishers wants to put over here running through our neighborhood, and we’re not happy about it,’” Heirbrandt said. “I met with him and other folks who showed me where the City of Fishers wanted to take a pedestrian bridge through their neighborhood and into the Ag (agriculture) Park. He said, ‘We are all upset about it and don’t think it’s the right place to be.’ I agreed with him.”

Heibrandt worked with the City of Fishers and learned the city wanted a bridge on the east side of Florida Road because the span wouldn’t stretch as long and would cost half as much as constructing it on the west side.

“I said, ‘OK, but I really think we ought to sit down and we ought to talk about a connectivity plan over in that area,’” Heirbrandt said.

Heirbrandt spoke with Jim Barker, a Bloomington resident and a senior technical advisor and project manager with VS Engineering. Baker met Hamilton County Parks Director Al Patterson when the county restored Potter’s Bridge and the Strawtown Koteewi bridges. Barker helped Jackson County recover a span of the Bell Ford Covered Bridge that collapsed in 2006. Upon learning about the bridge, Heirbrant and Patterson began to pursue the bridge as an option to constructing a new bridge.

Although organizations across the nation wanted to acquire the Bell Ford Covered Bridge, Barker helped convince Jackson County to give it to Hamilton County.

“I wouldn’t trust anyone more (to restore it),” Barker said. “When I first met Al at Potter’s Bridge, it was dilapidated and almost gone. Al and the county commissioners decided to restore that because of its importance to Hamilton County history and the project turned out really good.”

On Nov. 7, Heirbrandt and Patterson traveled to Jackson County to present on Hamilton County’s restoration plans for the bridge.

“We presented to them what we would do if we obtained this bridge and how we would restore it,” Heirbrandt said. “They voted and gave us (unanimous) approval.” 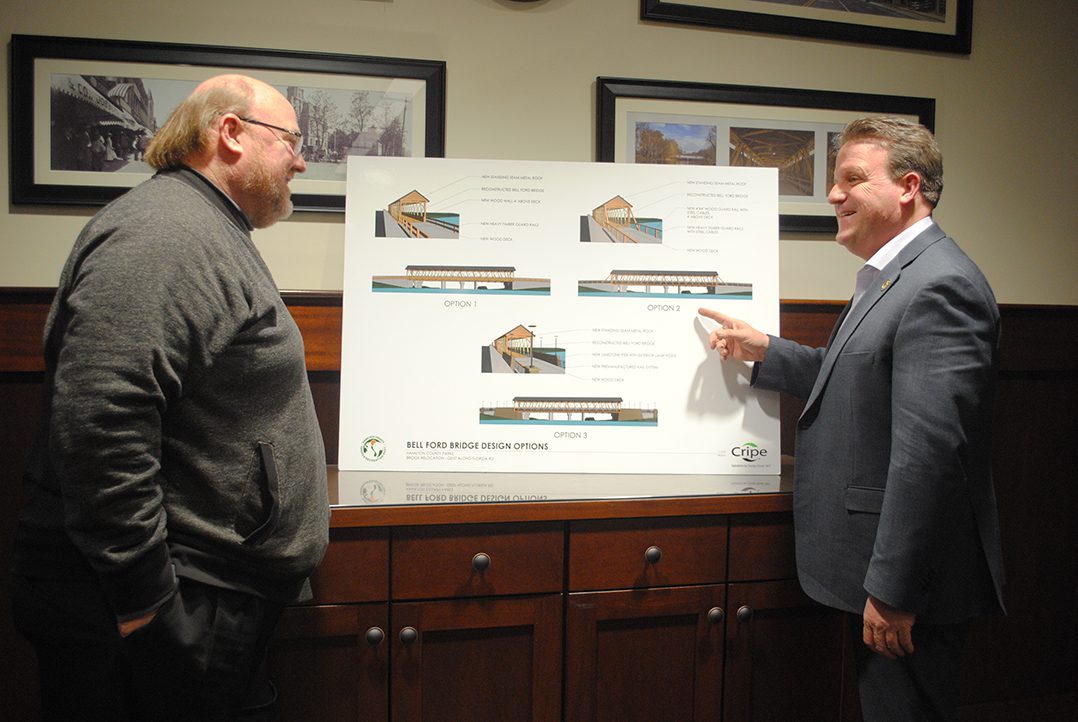 Hamilton County is exploring funding options such as an 80/20 grant from the Indianapolis Metropolitan Planning Organization. The MPO is granting funds for projects beginning in 2024. However, if the county is awarded the grant and other MPO projects fall through, the bridge could be restored sooner.

“When we’re applying for funding, it’s very competitive, but this project is very unique and it brings a lot of history with it,” Heirbrandt said. “It’s our hope those will be major considerations when they’re looking at funding for this project because it’s the only one (combination post truss bridge). That, and it was built in 1868. There’s not a lot of old bridges that are that old that are still around.”

The Bell Ford Covered Bridge has two spans and measures 325 feet in total length. The county only requires half of the bridge for its plans near Geist Park and plans to store the other span for future use.

The deconstructed bridge is stored in Barker’s barn in Bloomington. The bridge won’t be transported until nearer the restoration date.

When reconstructed, the bridge will consist of a single span from the Bell Ford Covered Bridge and two contemporary-style approach spans. It will have a standing seam metal roof. The siding will be built with fiberglass, glass and other clear materials. Interior lighting will be installed. 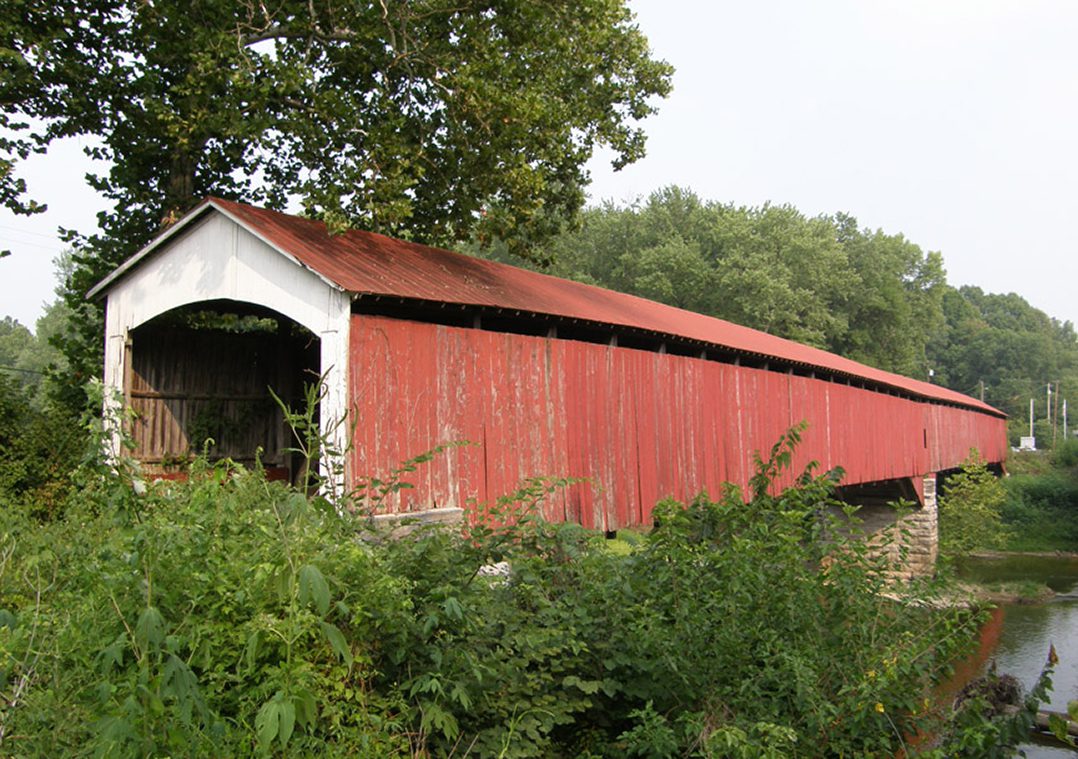 The Bell Ford Covered Bridge was built in Jackson County where it spanned the White River. (Submitted photo)

The Bell Ford Covered Bridge was constructed in 1868. It consisted of two spans above the east fork of the White River in Jackson County. The bridge spanned 325 feet, with each half spanning approximately 160 feet.

A wind storm caused the western span of the bridge to collapse in 1999. The eastern span collapsed in 2006. During the second collapse, the bridge fell into the river but many of the trusses were salvaged.

The bridge was has been stored in engineer Jim Barker’s barn in Bloomington since the collapse.