You are at:Home»Current in Zionsville»Zionsville Cover Stories»Survival Science: Zionsville teen reunites with doctors who saved his life

When Zionsville teen Ryan Bardellini fell from a moving vehicle and fractured his skull in November 2017, his immediate prognosis was not good. He had been out with friends during Thanksgiving break and slipped from inside the back of a moving SUV.

Upon receiving a call from his friend alerting her to the accident, Ryan’s mother, Kimberly Bardellini, rushed to St. Vincent’s Hospital on 86th Street.

“They did not expect him to regain consciousness,” Kimberly said. “It was a very, very bad prognosis.”

Ryan’s neurosurgeon, Dr. Charles Kulwin of Goodman Campbell Brain and Spine, began treating him two days after his accident. Because Ryan’s brain was so swollen, Kulwin didn’t expect him to live.

“When I first saw him, I looked at his injury and frankly thought it was not survivable,” Kulwin said. “I had a fairly frank discussion with his mom, but we said, ‘He’s young, let’s give him a chance.’ And that’s when we did the procedure, taking out half his skull.” 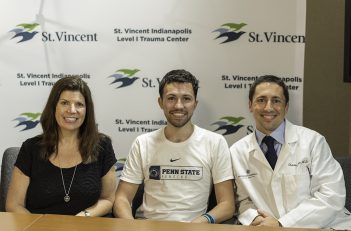 From left, Kimberly Bardellini, Ryan Bardellini and Dr. Charles Kulwin pause for a photo at the reunion.

After the craniectomy, Ryan showed little to no improvement for more than a month. The right side of his body seemed to be paralyzed. During this time, the section of Ryan’s skull was kept in a medical freezer in Louisville, Ky.

“Two months later, you can’t walk around like this. Your brain doesn’t like to not have its shell over it,” Kulwin said. “It was time to put the bone back on.”

According to Kimberly, it was after the second procedure, the cranioplasty, that her son’s condition began to rapidly improve, surprising her as well as doctors.

“We saw almost immediate, remarkable improvement after that. They had been saying, ‘Ryan, can you give a thumbs-up?’ And he had been unresponsive,” Kimberly said. “Then, in the recovery room, he gave a thumbs-up. We thought he was paralyzed until that surgery. I asked him if he could wiggle his fingers on his right hand, and he just, like, splayed them apart, and that was the morning after the surgery.”

Nearly a year after his accident, Ryan has made an astounding recovery. He has been able to attend prom, graduate from high school and is taking a class at Butler University.

Ryan, 19, said he has no memory of his accident nor most of the intense medical treatment that followed.

“I had no idea I was even in an accident,” Ryan said. “I thought I was at some kind of school trip or something, as weird as that sounds. Then my mom sat me down and explained it all to me.”

In September, Ryan and his mother returned to St. Vincent to meet with and thank the doctors and nurses who saved his life. Kulwin had seen Ryan at his high school graduation but during the reunion was still shocked by how far his former patient had come.

“Actually, I wasn’t 100 percent sure it was him when he walked in,” Kulwin said.

Ryan plans to transfer to Purdue University, choose a major and continue to train in his competitive sport of fencing.

“I’m still fencing. I used to be the No. 1 fencer in 10 states. Now, I’m like 190-something,” Ryan said. “I’m looking forward to Purdue like crazy. I’m really not sure of a major yet. I was going to take a few classes and then make a decision, but my strongest suits are English and biology.”

For Ryan, who recently participated in the Brain Bolt 5K to benefit patients with brain and spinal injuries, the reunion at St. Vincent was an important chance to express his gratitude.

“All my doctors and all my nurses, I love them. They are my favorite,” Ryan said. “I work my hardest to do everything I can to support them, so I spoke at the Brain Bolt and did the interview at St. Vincent. I want to thank them forever because, I mean, they’re really just the best.” 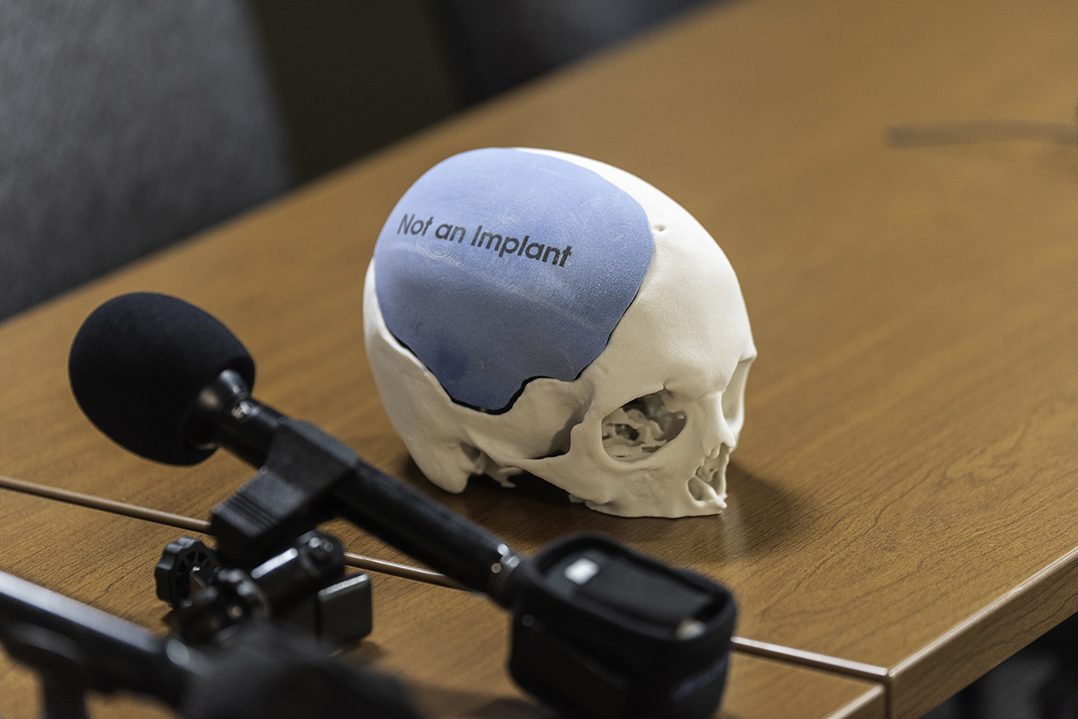 Dr. Charles Kulwin exhibited an example of a craniectomy and cranioplasty.

How is a craniectomy performed?

Dr. Charles Kulwin exhibited an example of a craniectomy. The blue space indicates the piece of removed skull, that would later be replaced through cranioplasty. (Photo by Benjamin Stout)

For Ryan Bardellini, a craniectomy was the best hope to regain use of his mind and body.

“The brain was swelling so much, it was starting to accumulate damage to the areas that are going to allow you to be you again,” Dr. Charles Kulwin said. “As a last resort, we will take off a very large window of bone to allow the brain to just swell outward.”

The process of craniectomy involves anesthetization, followed by close monitoring of vital signs. The neurosurgeon makes an incision in the scalp, typically on the side of the head where the most compression is taking place. Once the skin and underlying tissues have been moved aside, a drill is used to make holes in the skull. The holes are connected with a saw and the bone is removed.

“We had to tailor it because his skull was still fairly ripped apart, so we incorporated that into (the removal),” Kulwin said. “His brain used every little bit of space that we got.”

The bone is stored in a freezer in hopes that, when the patient’s brain swelling has subsided and their condition is more stable, the bone may be put back in place with a cranioplasty.

For Ryan, the cranioplasty was a success.