You are at:Home»Current in Westfield»Westfield Community»Hanes gets Colts MVP honor through Damar Services

Matthew Hanes has loved football ever since he can remember.

He was able to play until sixth grade, but after that his autism made it too difficult to continue. Yet Hanes, 18, still follows the sport, especially the Indianapolis Colts. 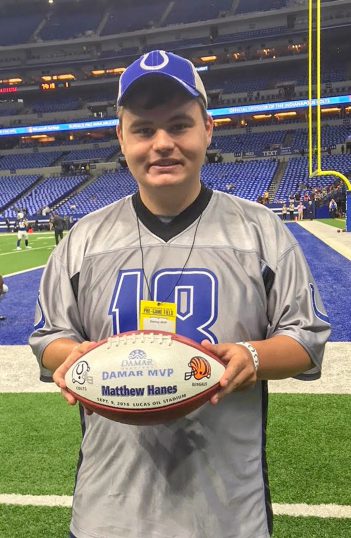 Matthew Hanes with the football the Colts awarded him at Sept. 9 game. (Submitted photo)

A partnership between the Colts and Indianapolis-based Damar Services, which provides services to children and adults challenged by autism and intellectual, developmental and behavioral disabilities, one Damar client will be selected to be an MVP for each of the Colts’ home games. Hanes received the MVP honor for the Sept. 9 opener against Cincinnati at Lucas Oil Stadium. He and three guests got to be on the field before the game.

“I will never get an experience like that ever again,” said Matthew, who lives at a group home and goes to school at Damar

He shared it with his parents, Westfield residents Mickey and Tammie Hanes, and a friend, who is a Damar graduate. Current in Westfield did not receive permission to publish the friend’s name.

“The Colts did such a wonderful job and so did Damar,” Tammie said. “It was the experience of a lifetime for him,”

The day began with a stretch limousine picking up Matthew, his parents and his friend, from Damar’s campus and taking them to the Colts VIP entrance where they were met by a Colts representative.

“We got to go down on the field while they were warming up and they gave Matthew a commemorative football with Damar on it, the date with Damar and Colts MVP on it,” Tammie said.

Hanes said they meet and take pictures with the Colts’ mascot Blue.

“We stayed for the national anthem and then they escorted us to really good seats,” Tammie said.

Matthew said getting to see the players during pregame warmups was the best part.

“I’m a huge Andrew Luck and T.Y. Hilton fan,” he said. “We got an NFL-sized football, which I thought was amazing.”