The Indiana University graduate was born in Bloomington and still has a home there, but he is based in New York City. 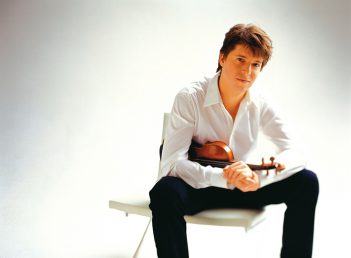 “I’ve been there a few times and it’s a fantastic hall,” Bell said of the Palladium. “It always feels nice to play there on stage. I love the audience. Coming back to Indiana is always a pleasure. It’s very exciting to have the Palladium in the Indianapolis area. My sister, Toby, lives there and they love going to concerts. My mother, Shirley, and younger sister, Rachel, live in Bloomington, so they will all be there for the concert.”

Bell, who plays a 1713 Huberman Stradivarius violin, will perform with pianist Sam Haywood at 8 p.m. Oct. 12 at the Palladium in the Center for the Performing Arts.

“Sam and I have been performing about six years together on a regular basis and he’s a wonderful pianist I met in London,” Bell said. “Since it’s a solo recital with a piano, it’s a tasting repertoire of classical musical. But when I play a recital, it’s a more intimate experience. I get to play lots of different things. In this case, it’s a broad repertoire starting with Brahms. At the end of the concert, I don’t list what I’m going to play on the program because I leave it up to the moment.

“I enjoy that sort of format because it gives me an opportunity to play a variety and show different sides of myself. Most people that follow me tend to tell me they enjoy to hear a recital more than anything else because of the intimacy and variety.”

Bell, who also spends time in London as music director for the Academy of St. Martin in the Fields, performed the solo part in John Corigliano’s Oscar-winning soundtrack for “The Red Violin.”

“We’re celebrating the 20-year anniversary of it by doing it live with the film with the New York Philharmonic for four performances (Oct. 16-20),” Bell said.

It’s all part of his hectic schedule.

“It’s been as heavy as it’s ever been,” Bell said. “It puts me on the road about 250 days a year, but I love it. I have a hard time saying no because I want to get to every continent each year and all the places I enjoy going to. So far, I’m surviving.”