“I have been doing it ever since,” said Van Voorst, a 2008 CHS graduate. “I was also in an improv group for four years while I was at Purdue University.” 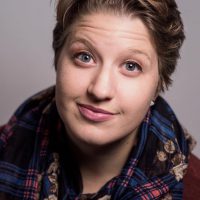 “I believe that all actors should know at least the basics of improv,” said Van Voorst, who is a member of ComedySportz Indianapolis. “It’s a wonderful opportunity for young actors because their minds are already so creative, so they can bring that naturally to a scene. It will be good for these kids as they grow as actors because it leaves their minds flexible and teaches them to work together as part of a team or ensemble rather than just one individual actor with one role.”

The age range for the ACT TOO! members is third grade to eighth grade. Twenty-four students auditioned for ACT TOO! and 12 were selected.

“I was so happy to see that kids were excited to learn and do some improv,” Van Voorst said.

Van Voorst said there will be some showcases throughout the year. The time table for most performances is to be determined, but there is a Jr. Civic Variety Hour scheduled for May 4, 2019.

“The kids will also be doing caroling in the winter around the Carmel area,” Van Voorst said.

Melissa Hook, Civic’s marketing and events manager, said the caroling is part of Civic’s outreach program and is funded by the Clay Township Board of Trustees.

“ACT ONE and now ACT TOO! will visit retirement communities in Carmel,” Hook said. “We are also working with the Christkindlmarkt to do caroling there. This is just a performance, no funding or fundraising.”