You are at:Home»Current in Noblesville»Noblesville Community»Schools again expand technology resources

At the start of the 2018-19 school year, Noblesville Schools students in kindergarten, first, second and third grades were issued iPads for the first time, expanding the one-to-one (1:1) initiative district wide. 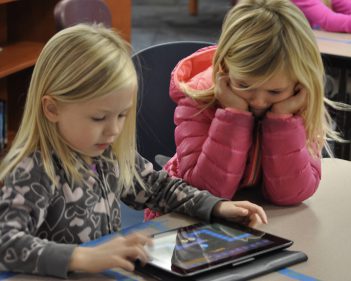 “We actually don’t use the term ‘1:1’ anymore because it has actually grown beyond that,” said Andrew Swickheimer, director of technology at Noblesville Schools. “Now, we call it a technologically enhanced classroom. What that means is it’s just another tool that our students and teachers have access to. We are fortunate enough that we don’t have to leave and go to a computer lab to have some of those digital experiences. Instead, those things can ebb and flow throughout the day as the teacher finds them appropriate.”

Several years ago, the district formed a committee made up of parents, students, teachers and administrators to map out a plan for digital learning.

“We’ve been really deliberate in how we’ve implemented technology in the classroom,” Swickheimer said. “We started (grades) nine through 12, then we added six through eighth, and then we did fifth grade, then fourth, and now we’re doing K-3. It’s actually been a span of like five years, and the way that we’ve made that work is we’ve put in place pilot classrooms to help kind of empower those innovators. So, we did that with K-3, too, and we saw really positive results.”

Criticism of 1:1 learning in school districts often revolves around questions about funding and about students using an electronic device for extensive periods of time, both of which the Swickheimer and other district officials said is not an issue with this expansion.

“One of the misnomers we hear sometimes is they think a kindergartener is going to be on a computer all day, which is not accurate,” said Marnie Cooke, director of marketing and communications at Noblesville Schools. “It’s really just one tool in the toolbox. Kids are still reading real books and still writing with paper and pencil. It’s just something else that’s available, not something they’re going to be using all day, especially with the younger ages.”

Per funding, district administrators said fees did not increase for students in kindergarten through third grade because of access to iPads, and they do not pay a technology fee like students in grades four through 12 since they won’t be taking the devices home.

“We’ve been able to get a positive return on investment with some of our iPads,” Swickheimer said. “These are actually iPads we have been using for four years at another grade level. So, we’re repurposing them and using them in the K-3 classrooms.

“There has always been technology in the classroom, but now that you have (a device) available for every student, you can personalize education a lot more.”