This season we’ve been writing about foods that all football fans love to eat in the tailgate lots on game day. We’ve featured pizza, pancakes, hot dogs and burgers. Remembering that last year the number one food ordered from the deli sections in our favorite upscale markets for football games was wings, we decided it was time to show how to serve tailgate Buffalo wings that taste as good as if they were just served at one’s favorite restaurant. 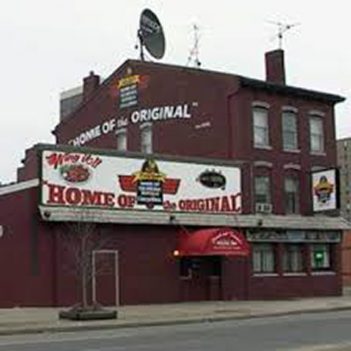 The Anchor Bar in Buffalo, N.Y.

As you’ve surely noticed, this season we have visited the country’s most famous chefs and restaurants to taste foods for which they are famous to learn how to adapt it to tailgating. So, when it comes to Buffalo wing there is no better place to start than their birthplace, the Anchor Bar in Buffalo, N.Y. As the history goes, on March 4, 1964, Dominic Bellissimo was tending bar at the Anchor Bar Restaurant at the corner of Main and North Streets in Buffalo, N.Y. Late, on that night, at about closing time, a group of Dominic’s friends arrived at the bar with ravenous appetites. Dominic asked his mother, Teressa, to prepare something for his friends to eat.

She then took wings, a part of the chicken that usually went into the stockpot for soup, and deep fried them and flavored them with butter and cayenne pepper sauce. The wings were an instant hit and soon people from all over town were flocking to the bar to experience their new taste sensation. From that evening on, Buffalo wings became a regular part of the menu at the Anchor Bar.

The Buffalo wing taste has now spread across America and the world and is enjoyed by people of all ages. This famous restaurant has become a chain with dozens of locations in Canada and in the US as far west as Las Vegas.

At the original Anchor Bar Restaurant on Main Street in Buffalo we spoke with Jason Ryals, the General Manager. We asked Jason how can we make these tasty wings for a tailgate party where the people don’t have deep fryers? We showed him our oven baked recipe and asked his advice. He suggested following our recipe and then at the tailgate, re-sauce and grill the wings until they are warm and crispy. He also suggested adding a little barbeque sauce as we reheat some of the wings on the grill at the tailgate. Among his comments, “We serve a lot of people that like a barbeque flavor as well.” 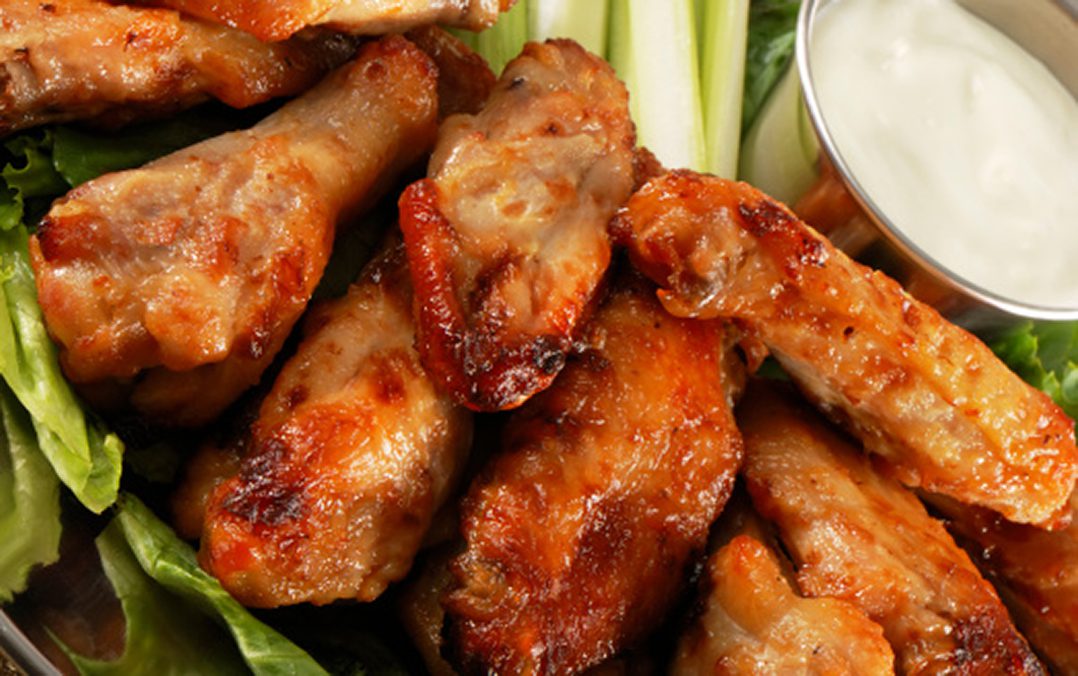 Preparation
Preheat oven to 425 degrees. Wash wings and clip off their tips with poultry shears (or knife). Cut wings at the joint into two parts each. Put wings on paper towels to dry. Using a gallon size re-sealable plastic bag, put in two cups of all-purpose flour, a tablespoon of kosher salt, and teaspoon of black pepper. Place wings in the flour bag and coat them with the mixture. Remove the wings with tongs, shaking off excess flour. Place wings on a sheet pan rack with the pan below. Place the racked pan into the oven and bake 35 minutes. Remove wings and place them into a bowl of the buffalo wing sauce to toss and coat them slightly. Replace the wings onto the rack and cook them five or ten minutes more until they crisp slightly.
Remove the wings and let them cool. Then place them in the refrigerator overnight in a zip bag. At the tailgate heat the wings to crispy on your grill and then re-sauce them and serve. Try some with barbeque sauce as well.
Serve with celery and blue cheese or ranch dressing.

You will find Frank and Teressa’s Original Anchor Bar Buffalo Wing Sauce on line from places like Walmart or even The Anchor Bar itself. Or, you can substitute another brand of Cayenne Pepper Sauce but be sure to add butter, one stick to a cup of sauce.