You are at:Home»Current in Westfield»Westfield Community»Local Girl Scouts earn Silver Award for work on Hamilton County’s only homeless shelter

Hamilton County’s first and only homeless shelter, Third Phase at 15755 Allisonville
Rd., recently received a major upgrade due in part to two local Girl Scouts working on their Silver Award, the highest award a Girl Scout Cadette can earn. 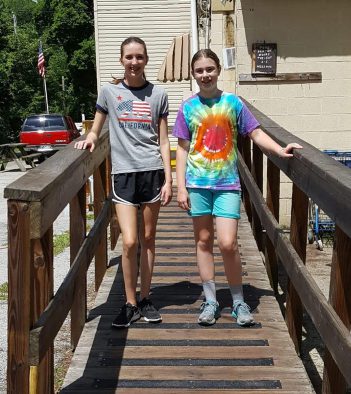 Westfield High School freshman Bethany Huss and Emma Brashear, an eighth-grade student at Well Trained Mind Academy at Northpoint, said after researching a variety of topics for their September 2017 award, they knew they wanted to do something to help Indiana’s homeless population.

The Scouts founded Third Phase, which also serves as a thrift store and food bank. Proceeds cover the shelter’s utilities.

“I was surprised to learn that there was a homeless shelter in Hamilton County,” Brashear said. “We have driven by Third Phase many times but never realized how much help they provide to the community.”

In November 2017, the Scouts visited the facility and saw the many updates that the 33-room, 20,000-square-foot facility needed.  A slick wooden ramp and uneven concrete below it caught their attention because the ramp and concrete often caused injuries.
Huss and Brashear girls spoke with family members on how best to renovate the ramp and concrete. They priced repair items at Lowe’s, and through Lowe’s community service project fund they were able to complete the project only $30 above their budget.
A total of eight people helped with the work, clocking a combined 52 hours of labor.

Huss said the project was about improving the quality of life that a home provides for people.

“When I see homeless people on the streets, I know they don’t have somewhere like that to go,” Huss said. “So, this project to me meant fixing up part of a warm, safe place where homeless people could find shelter.”