You are at:Home»Current in Fishers»Fishers Community»FHS student represents Indiana at ALA Girls Nation conference 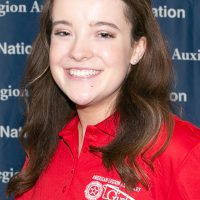 ALA Girls Nation is a seven-day government leadership conference that teaches women about the functional operations of the federal government and promotes patriotism.

“ALA focuses primarily on appreciation of our veterans, so a lot of the programs focus on Americanism and patriotism,” Butler said. “But much of that is done, particularly with ALA Girls Nation, through female empowerment, emboldening women and educating them so that they can participate in government.”

Throughout the week, the women met with Vice President Mike Pence and state senators, visited national monuments and participated in a community service project. Butler said the women spent much of their time learning about the election process, planning their party rally and convention and working to pass legislation in mock senate sessions.

Butler and the other Indiana senator introduced a bill regarding a dual immersion education program where native English speakers and English language learners would be integrated in the same classroom in order to learn the same content in multiple languages and avoid isolation.

“This experience is incredible, especially because it provides an environment of female empowerment where we are educated, and then we’re taught that we are able to be powerful and lead discussions and utilize that knowledge,” she said.

Butler is president of the FHS speech and debate team and plays junior varsity lacrosse. She also is part of the Team USA Debate Development Team with the National Speech and Debate Association and is a member of the district youth advisory board for State Sen. John Ruckelshaus.

Butler plans to study international studies and political science in college and then pursue a law degree. She said her dream is to be an immigration lawyer focusing on asylum and refugee status.