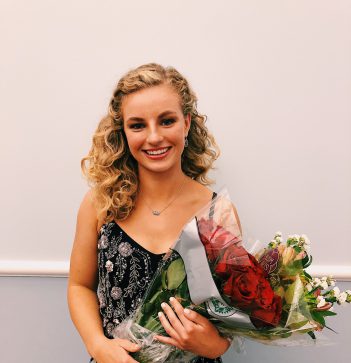 Olivia Broadwater was one of 10 Songbook Academy finalists. (Submitted photo).

Olivia Broadwater had the time of her life.

The Zionsville Community High School junior was the only one of six Indiana participants to earn one of 10 finalist spots for the Songbook Academy finals July 28 at The Palladium in Carmel.

“Being able to sing on The Palladium’s stage for the finals was surreal,” Broadwater said. “Not many people can say they got to sing alone in the spotlight in that great concert hall, and I am so gracious and humbled by this once-in-a-lifetime experience. It is such a freeing experience to get to sing in such a beautiful concert hall where the perfect acoustics alone could bring tears to your eyes.”

Broadwater sang “Ma (He’s Making Eyes At Me)” and “Since I Fell for You.”

“I don’t think I could explain with words how much joy this has brought to my heart,” she said. “I’ve made so many great friends in just one short week. Now, I have friends all over the country that share the same affinity for the Great American Songbook. Many kids our age have many doubts when going into the music industry due to it being so difficult for many artists, but this has been such an eye-opening experience for me and many others. I feel much more confident in my love for music, and I have already cried so much this week just due to the fact that I love what I get to do. This week has been truly outstanding, and I could not have done it with without the support from my mentors, friends, family and my community.”

During the workshop, Broadwater said they learned so many important components for being a singer and being vocally healthy, in general.

“Some of my favorite things I’ve learned in the workshops have to be the wacky yet so useful warmups we learned for singing and speaking,” she said. “The workshops also helped us really dig into our songs’ lyrics to find a deeper message and interpretation. It helped us really connect with the music and create our own story to emote.”