You are at:Home»Current in Zionsville»Zionsville Cover Stories»Advocacy in East Africa: Ribe Project aims to provide support system for Ugandan tribe 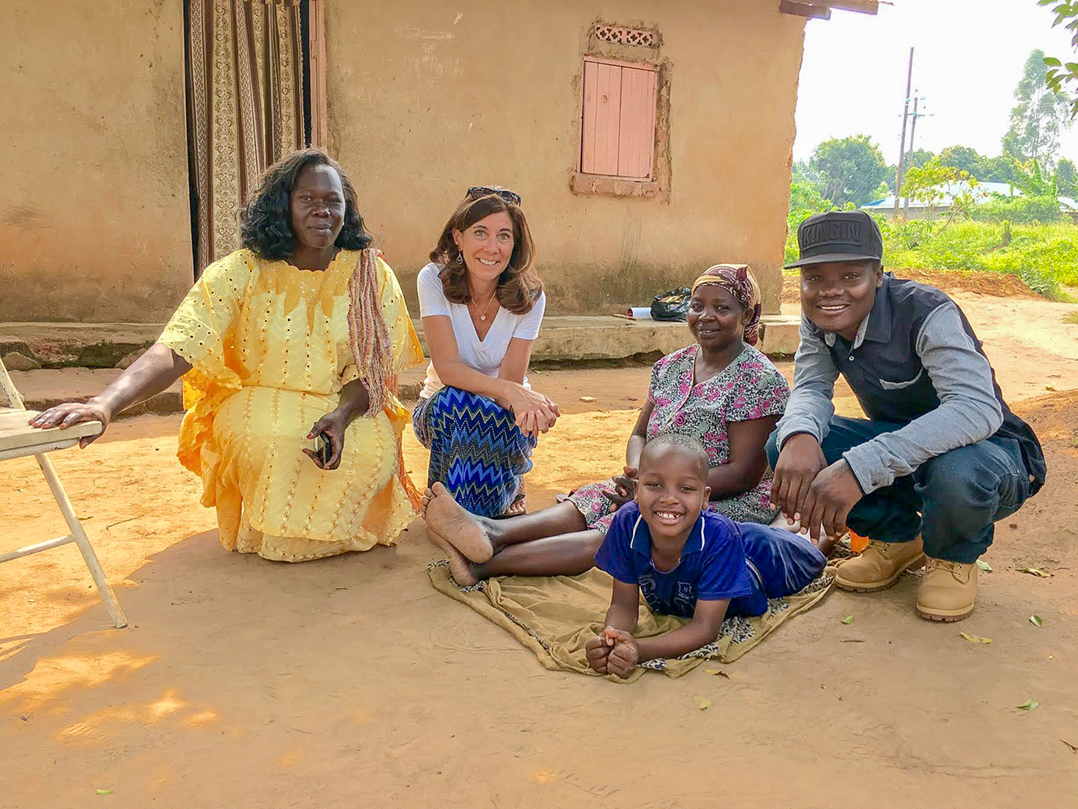 Krieble with her Ugandan “son,” Boni, and his family in the village of Laliya. (Submitted photo)

The Acholi Tribe of northern Uganda have a saying, “Kulu pong ki jange,” which means, “A water well gets full when many small sources flow into it.” Zionsville resident and University High School’s Director of Learning Support Services Brett Krieble wants to do just that for a Ugandan community with the launch of The Ribe Project.

A nonprofit founded by Krieble, The Ribe Project provides vocational skills, such as dress-making, bead-making, sandal- and handbag bag-making and instruction on how to raise poultry and pigs, to women from the Acholi community in and around the Ugandan town of Gulu.

The Ribe Project also will offer business education classes to help women learn how to plan a budget, determine overhead costs and market their products.

Krieble said she spent much of her time as a full-time mom, but when she returned to teaching in 2007, her interest in global issues began to grow.

“The fact that something as important as 30,000 children being abducted as child soldiers and over 1.5 million people internally displaced in Uganda was basically unknown here in the west, was an eye-opener for me,” Krieble said.” I felt called to learn more and tell their stories. I think once you begin to become involved in humanitarian issues, your heart just leads you further and further down what is, unfortunately for the world, a never-ending path.”

In 2008, Krieble met Akena Boni, one of the 30,000 children kidnapped by the Lord’s Resistance Army.

Boni was traveling with Invisible Children, an organization dedicated to ending the longest running war in East Africa, and came to speak at UHS. Boni’s visit came after Krieble’s daughter, Haley Krieble, entered UHS into a Schools for Schools fundraising campaign and competition after hearing about the Invisible Children organization through her favorite band, Fall Out Boy. Haley is a board member for The Ribe Project.

Haley, like her mother, has a passion for helping women and girls across the world. She currently serves as a Youth Advocate at Prevail, Inc. and provides support to children who have experienced sexual abuse.

“The resiliency in women and children drive me,” Haley said. “Women are wonderfully powerful souls and deserve to be supported through all aspects of their lives.”

In 2008, Krieble and her daughter launched the Global Citizens Club, a group dedicated to raising awareness about Invisible Children, at UHS.

Krieble now calls Boni her Ugandan son, and he calls her “mum.” Two years ago, Boni asked Krieble to name his daughter, Aber Harper. Boni is the Ugandan director for The Ribe Project and wants his daughter and the young girls in his community to have many opportunities as they grow.

Krieble said it was when she met Boni’s mother, Abollo Kevin Florence, in January 2014 that she realized the need for The Ribe Project.

“We talked about what she would do to support herself if she had the means,” Krieble said. “Her dream was to open a pharmacy in her home to supply remedies for her village. With a microfinance loan, she would have the means to change her life for the better.”

Krieble said more than a third of Ugandans live below the extreme poverty line at $1.90 a day.

“Many of these women are desperate for ways to make outside income for their families,” Krieble said. “With so many villages surrounding the town of Gulu, there are plenty of opportunities to open small shops, even out of their homes, to make money.”

Krieble said the cost to provide training to the women is approximately $75 for the six-month course. The price includes training, materials and teacher salaries.

Krieble said although unemployment is high in the area, the cost of living is low by western standards. According to Krieble, $250 would provide startup supplies and six months’ stall rental at the Gulu City Market; $200 would allow a woman to purchase a pair of pigs, fencing materials and feed for a year; and $100 would provide materials to make multiple handbags, sandals and beaded jewelry.

Niki Gates, a former UHS student and board member for The Ribe Project, said she loves learning about the culture and the struggles and triumphs of the communities in Uganda as well as helping young mothers achieve unity and economic stability. Gates lead fundraising efforts for Ugandan scholarship funds at UHS and has completed two years of national service with AmericCorps. She is pursuing a master’s of public affairs degree at Indiana University.

“Being from America, it’s so easy to identify the differences between us and them,” Gates said. “But there are so many similarities that connect us and can be used to help each other learn and grow, and that is one of the most empowering and magical experiences.”

Krieble is pursuing a master’s in nonprofit administration and development. She will travel to Uganda soon to find a permanent site for The Ribe Project and plans to launch the project’s first program in spring 2019. 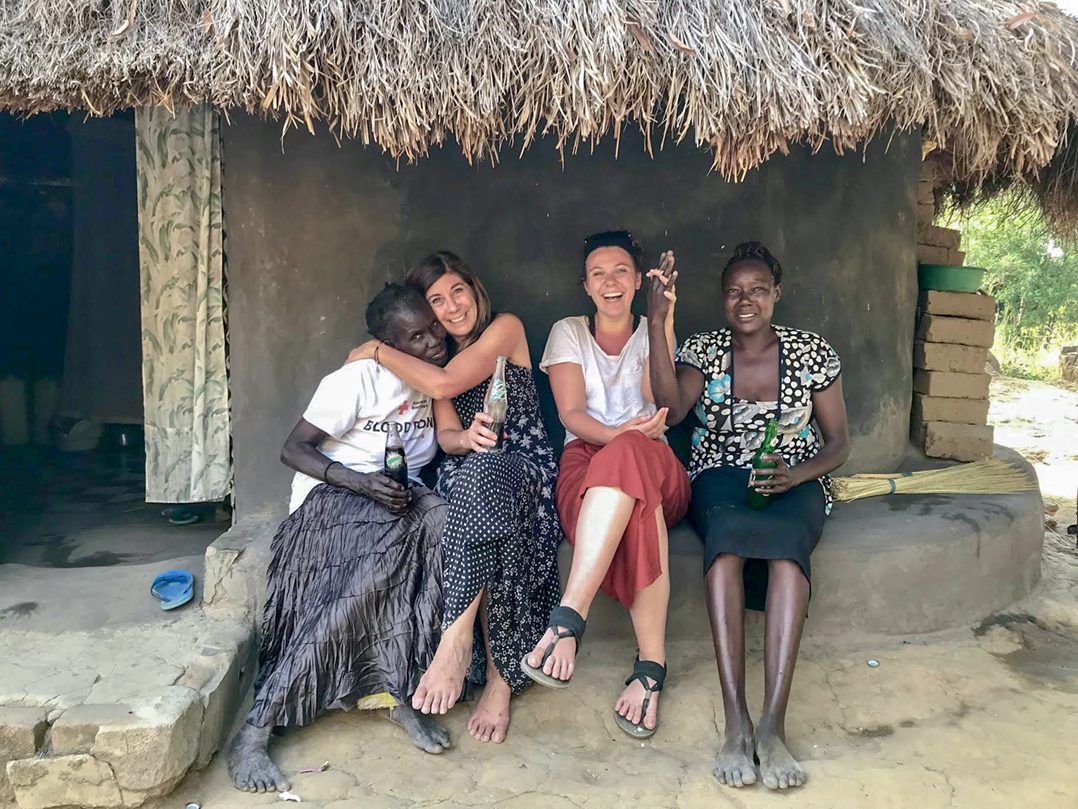 “The southern half of Uganda is green and hilly and home to many tea and coffee plantations. Kampala is a huge, crowded and crazy city. But as you drive north from Kampala, the landscape changes dramatically. The land becomes very flat and towns are further apart. When you get into Acholi country you begin to see the landscape dotted with their traditional round, thatch-roofed homes. Entering Gulu town, you see people walking everywhere. Babies on backs of women, women with baskets, huge jackfruits, or water cans on their heads as they go about their business. It’s an area full of sound and smells. People talking and laughing, meat and corn roasting…..it just feels like home every time I visit.”

TIMELINE: The path of the Ribe Project