Brynn Tyszka, a Carmel resident since 2016, is a new member of the Indianapolis Symphonic Choir. 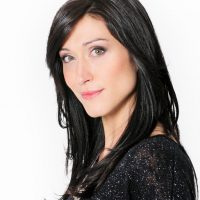 The choir is finishing up its 2017-18 season and recently performed at the Kennedy Center in Washington, D.C., marking its first performance there in almost 40 years.

“I’ve been a singer all my life,” Tyszka said. “I love choral singing, but I’m really a musical theater person. I grew up watching ‘Grease.’ It was something I could relate to. I had the vinyl record and an old record player, so I would sing along. I knew all the words.”

A native of Rochester, N.Y, Tyszka comes from a musical family.

“My grandmother sang with the USO for years,” she said. “Growing up, I would sing three-part harmonies with my aunts, who were professional singers. I was 18 when I went on my first national tour.”

Despite her impressive background, Tyszka said she still wanted a broader set of performance skills.

“I went to college for music education, but I majored in music theatre with a concentration in directing at Nazareth College of Rochester,” she said. “I’m a musical theater performer, a singer, an actor, a dancer. I always loved watching the Dames of Broadway, Gwen Verdon, Chita Rivera.”

Although it was her husband’s job that brought her to Carmel, Tyszka is pleased with the opportunities that the city affords.

“Step 1 is to get a reputation here in the area,” she said. “I recently had a baby, so I would like to get back in the swing of performing, directing, choreographing. There’s a lot more opportunity to make a living doing that here. My favorite space to perform is in the intimate setting. I would love to perform at the Studio Theater at the Center for the Performing Arts.”

When asked what role she would like to play there, Tyszka was quick with the response.

“I love anything Stephen Sondheim,” she said. “My favorite is ‘Into the Woods’ because it’s super meaningful to life in general. It really speaks to the human condition. I played the part of the witch in college. I would love to do it again and have another crack at it.”