You are at:Home»Current in Carmel»Carmel Community»Orchard Park Elementary parents rally to keep campus in Home Place 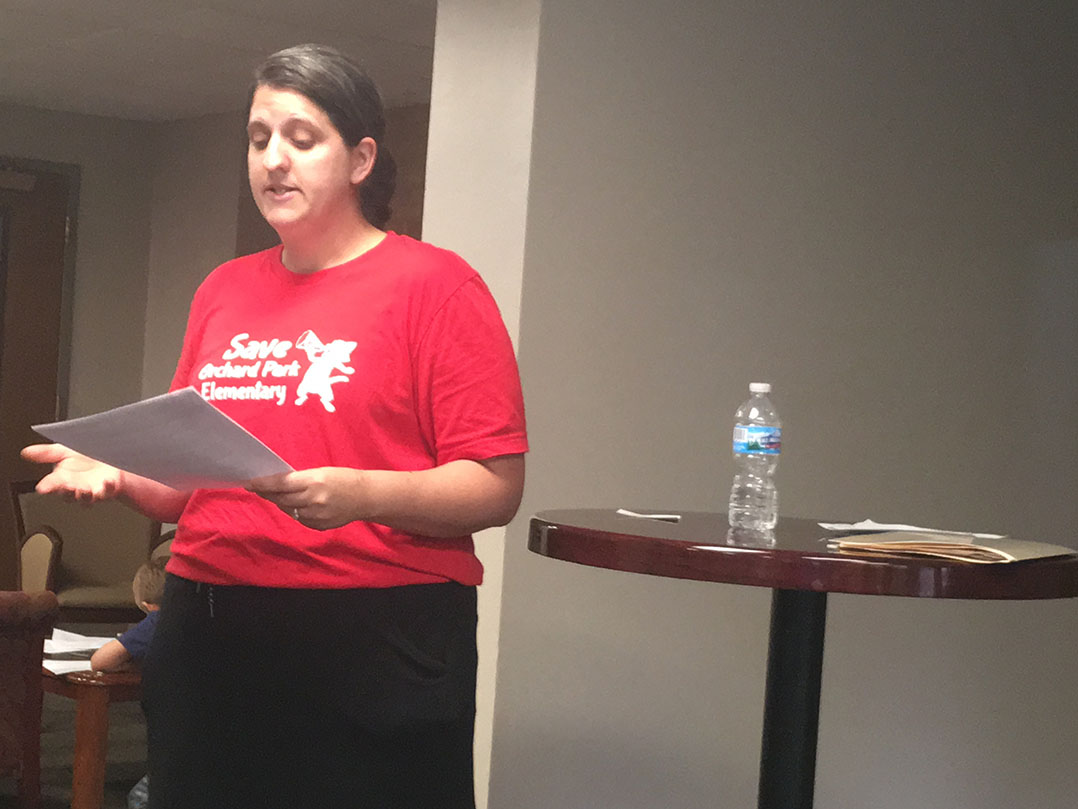 Orchard Park parent Laura Moore speaks at a rally to keep the school in Home Place. (Photo by Mark Ambrogi)

A recommendation by Camel Clay Schools interim co-superintendent Roger McMichael to close Orchard Park Elementary and build a new school five miles northwest has parents rallying to save the school. A group of concerned parents met May 30 at Orchard Park Presbyterian Church.

The proposed site is at Clay Center Road, five miles from Orchard Park Elementary on the west side of town, which has had larger population growth in recent years.

McMichael initially had considered reducing the number of Carmel elementary schools from 11 to 10 by closing either Orchard Park or Carmel Elementary.

Laura Moore, an advocate with the Orchard Park Elementary United, a coalition of parents, pointed out that the recommendation would leave the district without a school in the south central section of Carmel. Most OPE students would be sent to other elementary schools, not the new one.

The school board, which also is considering a recommendation to build a new Carmel Elementary School next to the current one, is scheduled to vote June 25.

Moore has four children in Orchard Park and a 3-year-old who will attend. Moore is a teacher elsewhere in CCS.

Moore said her family moved to the Orchard Park school district from Marion County because it is part of CCS.

“We’ve been diligently working on a fact-based argument against closing Orchard Park,” Moore said. “We’ve heard your emotions, we’ve heard your opinions. We love our school, we love our community. We want it to stay the way that it is. We have to look at the reasons why and take those to the school board.”

OPE has 719 students and is at 95 percent capacity.

“The school grew by more than any other Carmel Clay School this school year by 49 students,” Moore said. “Thirty-one languages are fully serviced at our elementary. We have a rate of 34 percent that receive free or reduced lunch at our school. The district average is 7 percent. No one is worried about getting off the bus for breakfast because 34 percent are getting off for it. Kids are not isolated because so many of them are receiving those services together.”

Moore said Orchard Park consistently receives an A rating from the Dept. of Education. The school, which was built in 1955, was renovated in 1991 and Moore said those renovations have held up. Moore said studies show that buildings constructed in the 1950s are shown to have more durability than ones built in 1970s or even the early 2000s.

“That’s because of the durability standards that were in place in the ‘50s that were put by the wayside in the ‘70s,” she said.

Orchard Park is one of six schools up for renovations in next 10 years.

Moore said a nine-page position statement has been sent to interim co-superintendents McMichael and Amy Dudley. In addition, there was petition signed by 600 people to keep Orchard Park Elementary where it is.

“It’s not over just because of the recommendation,” Moore said. “It’s time to voice your opinion to the school board before the next meeting.”

Moore said the decision is not fiscally responsible and does not serve the students.

OPE United member Jamie Elliott, who will have two students at Orchard Park in the fall and one at Carmel Middle School who went through Orchard Park, said her children have gotten a great education at the elementary.

“It’s a great school,” Elliott said. “We need that school to have that sense of community.”