You are at:Home»Current in Carmel»Carmel Community»More pressure, less support exacts toll on coaches

It’s not a moment he’s proud of.

After yelling at a third-grader on his daughter’s basketball team who made a mistake on defense at the end of a close Carmel Pups game, Aaron Seitz knew something had to change. 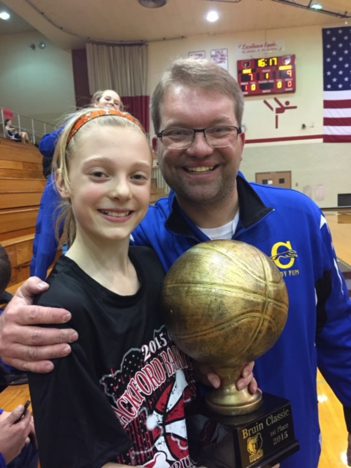 Aaron Seitz pauses with his daughter, Tally, after her basketball team won a tournament in February 2015. (Submitted photo)

“I looked in the mirror when I got home and said, ‘This was stupid. This is not what (sports) are about,’” said Seitz, who was coach of the team at the time. He saw in himself a dangerous mindset he believes is common among parents of young athletes, and he decided it was time to make a change in how he thought about youth sports.

Five years later, Seitz is founder of Competition Matters, an organization dedicated to improving the youth sports experience for players, coaches and parents by showing how being on a team can provide benefits in many areas of personal growth. A salesman by day, Seitz conducts workshops and training sessions and speaks on the topic.

Lately, it’s hit close to home. Seitz’s daughter is on the Carmel High School girls basketball team, and she is one of many players shocked and disappointed by the recent dismissal of coach Tod Windlan. One week after CHS Principal Thomas Harmas told parents Windlan would be the CHS coach next season, Carmel Clay Schools administrators reversed the decision but released few details, citing it as a personnel matter.

Since then, several girls basketball players and their families sought to have Windlan reinstated. They spoke about a culture at CHS that’s unfriendly to coaches, pointing out that a former volleyball and baseball coach also were released with little information why. Some indicated that a minority of upset parents had the power to force the dismissals, leading to heartbreak for many players and instability in the athletic programs.

CCS officials have been tight-lipped on specifics relating to the departures, but the situation does not appear to be unique to Carmel.

As commissioner of the Indiana High School Athletic Association, Bobby Cox has seen coaches forced to deal with more demands and pressures than they did in years past. 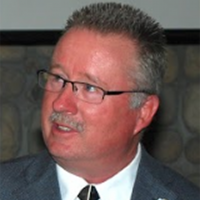 “I believe our education-based athletic coaches are working in environments today which possess greater demands from parents across multiple considerations combined with less empathy and understanding of reality,” Cox stated in an email.

Cox believes parents “come by this honestly” as their children face more competition for playing time and recognition as they move from youth sports into middle and high school.

“Parents experience difficulty in accepting their child is not one of the starters or significant contributors,” he said. “This is where conflict begins. Sometimes they manifest themselves in a criticism of the coach’s style, language, approach and/or philosophy.”

The problem goes beyond coaching. Cox said a shortage of referees is continuing to grow nationwide.

“The No. 1 reason officials quit working contests is abuse from fans (parents) and coaches,” Cox said. “If adults continue to act with disregard and disrespect to officials, these shortages may result in the cancellation of contests, which only disadvantages our young people.”

Dave Bolles, a Carmel resident who has daughters that compete in basketball and competitive cheerleading, said he believes some parents lose all sense of self-awareness while watching their children play sports. He said it can be difficult to listen to parents berate coaches, referees and players on both teams during a game.

“We had one set of parents who would sit on the opposite side of the gym, and forever I did not know why they did that, but now I do,” Bolles said. “They wanted to watch the game in peace.”

‘They really are trying their best’

With coaches being swamped with seemingly more pressure and less support, some wonder how many top candidates quit or avoid coaching altogether.

“Our young coaches begin their careers with a true belief they can make a positive difference in the lives of the students within their charge. Their enthusiasm and zeal is chipped away by overzealous parents that only are concerned with the promotion and attention directed at their children with less regard for the team and other students on the squad,” Cox said. “As this trend continues, quality coaching will continue to suffer, numbers will decrease thus opportunities for young people will erode.”

Seitz said most of the coaches he’s worked with appear to be pursuing the job for the right reasons: Helping kids learn how to work hard, succeed in their sport and move on to become successful adults. But at some point, the downsides of the job take their toll, he said.

“The majority of coaches are getting some of that joy taken away because they don’t get paid a lot for the type of complaints they have to handle and for the expectations put on coaches that just aren’t realistic,” Seitz said. “If you have a basketball team with 12 players and only five are on the court at a time, not everybody is going to get to play. I think parents need to understand coaches have their hearts in the right place and they really are trying their best.”