“It’s not exaggerating to say Allen Vizzutti is one of the great trumpeters of history,” Conrad said. “He will be our trumpet soloist, and his wife (Laura) is a tremendous pianist and she will be our piano soloist.” 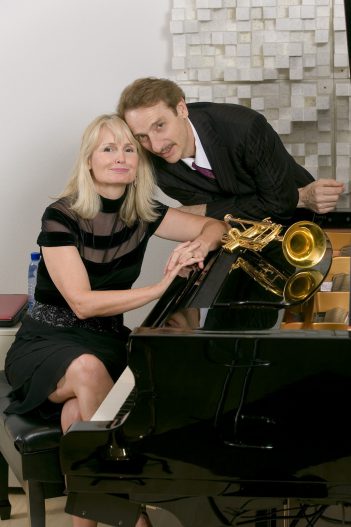 Allen and Laura Vizzutti will perform with the Indiana Wind Symphony May 25. (Submitted photo)

IWS presents “Trumpet Magic with Allen Vizzutti” at 7:30 p.m. May 25 at The Palladium.

Vizzutti performed with the IWS five years ago, Conrad said. This will be the first appearance on stage with IWS by Laura.

“Together they will do a piece that Allen wrote for them to perform with orchestras called ‘Gershwin’s Timeless Treasures,’” Conrad said. “It’s one they’ve done with orchestras around the country and probably in Europe as well.”

Conrad said it will include “I Got Rhythm,” “Fascinating Rhythm,” “Rhapsody in Blue” and some songs from “Porgy and Bess.”

“It will be a lot of very familiar tunes,” Conrad said. “Allen will play a piece called ‘Three World Winds,’ the title of three different types of wind storms. The music is very descriptive and really shows off his amazing trumpet skills.”

Conrad said the Vizzuttis are huge IndyCar racing fans and will join him at the Indianapolis 500 May 27.

“We’re doing one of the great concert band works, ‘Symphony No. 3’ by Vittorio Giannini,” Conrad said. “It was written in 1958 and has been a beloved piece of work ever since.”

Conrad said during the first act the James B. Calvert Music Educator Award will be presented to Jay Gephart, Purdue’s director of bands.

“He has chosen to guest-conduct ‘Riften Wed,’ which refers to a scene in a video game,” Conrad said. “It’s by a composer we have enjoyed doing many of her works, Julie Giroux.”