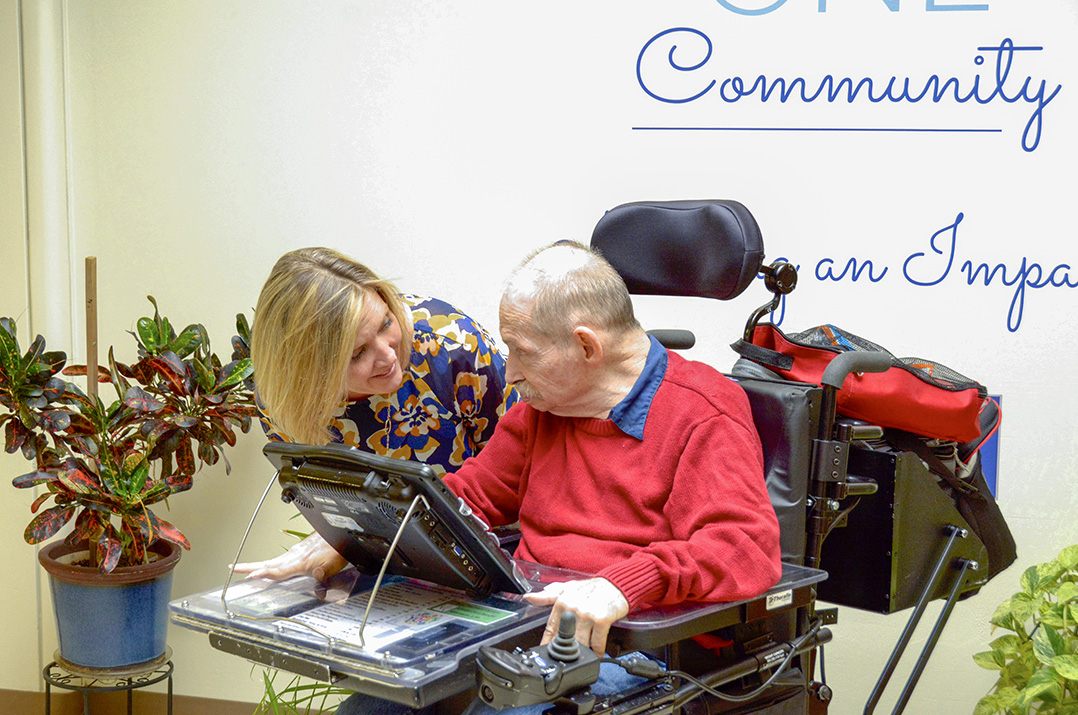 Walking through the halls of New Hope of Indiana, Allison Wharry is greeted by dozens of clients. She receives hugs, hears about morning activities and makes a lunch date.

“What kind of job do you get to be a part of people’s lives?” said Wharry, a Zionsville resident and NHI chief executive officer. “You can’t have a bad day when you come to New Hope.”

NHI serves families with disabilities at its main Indianapolis facility and brings those services to families’ homes. Through additional offices in Glendale and Castleton, it provides classes and therapy to clients in other parts of the city. 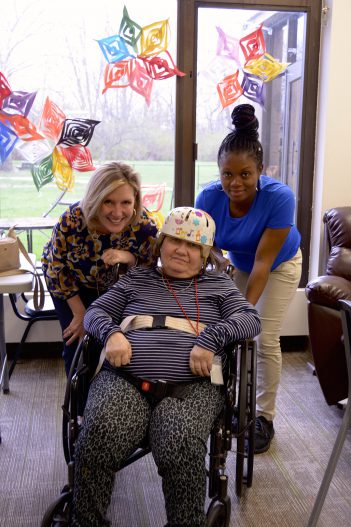 Back, from left, New Hope Indiana CEO Allison Wharry and direct support professional Olubukola Akinmayowa pause with Geraldine Keeling, who was the first resident at NHI 40 years ago. (Photo by Lisa Price)

Zionsville resident Lynne Marubashi’s adult son, Mark, who has autism, is among several local residents serviced by New Hope. Her son participates in community-based services, allowing him to enjoy weekly leisure activities such as bowling or visiting a park with a young men’s group. Marubashi noticed a difference in her son’s social behavior after he began participating almost three years ago.

“Being social is not one of his strengths,” she said. “This has really helped him communicate with these young men.”

Through the group or one-on-one assistance, her son is able to visit destinations that he otherwise might not be able to.

“It’s good for everyone,” Marubashi said, adding that her son makes eye contact when at a store or restaurant, which didn’t always happen a few years ago. “They have to learn to have appropriate behavior and conduct.”

Mark Marubashi, a Zionsville Community High School graduate, was first introduced to the program through school, but demand was so high he was on the wait list for several years.

NHI celebrated its 40th anniversary March 13 and hosted a formal fundraiser, A Silver Cup Celebration, May 3. In 1978, six individuals arrived on the northwest side of Marion County to a facility originally built as a residence for children with cerebral palsy. By the end of the year, the facility served 115 clients.

That number grew over the next decade, but the organization struggled financially until St. Vincent took over management in 1988. In what was revolutionary at the time, leaders recommended that people with disabilities live in the community instead of separate facilities. 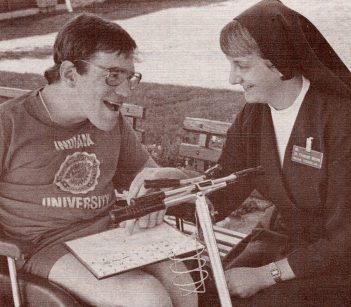 The organization’s mission is to provide a loving, supportive environment for individuals they serve through therapy and counseling programs. Facility staff members work with clients to determine their goals and how to reach them. Each day, individuals can see what activities they’re able to enjoy that day, who else will be in their group and which staff members will lead their group. Classes may include art, music or outings like a museum, usually based on clients’ interests. Often, they do activities in the community like Meals on Wheels or assisting in a community garden.

Wharry initially heard of New Hope when her niece received residential services from the organization. Wharry eventually worked for St. Vincent as a lobbyist and was asked to serve as the hospital’s appointed board chair for New Hope, something she was proud to do because of her niece.

A few years ago, administrative changes at St. Vincent left Wharry without a job at the same time the CEO role opened at NHI.

“It’s just interesting how your path gets somewhere,” she said.

Her role has allowed her to witness firsthand the program making a difference in people’s lives. One woman refused to talk until she spent time with a therapy dog on staff. Another young man with a goal to work at the Fashion Mall became the first person with a disability hired by Urban Outfitters.

“New Hope changes people’s lives, but it’s fun to see it when you’re walking down the hall at the Fashion Mall,” Wharry said.

In the near future, Wharry said NHI will have a transitional services program for 18- to 22-year-olds to work in the community several times a week as well as raising money for a food truck so they can hone business, culinary and marketing skills. The youth will rotate on a frequent basis so that more individuals can participate.

“I think it will be an exciting pre-vocational program so they can learn some skills and introduce some people with disabilities to the community at large,” Wharry said.

Wharry said NHI’s services are broad compared to other programs in Indiana, such as the Arc of Boone County.

“That was our genesis. We provided everything from Day 1. It just made sense for us to continue to provide everything, because that’s all we ever knew,” Wharry said.

Through the decades, the core vision hasn’t changed at NHI.

“New Hope is one of those places where you see it at work every single day here,” Wharry said.

NEW HOPE BY THE NUMBERS