Although she was at one time a popular student at her Texas high school, Jenna Quinn said she never considered herself a brave person. 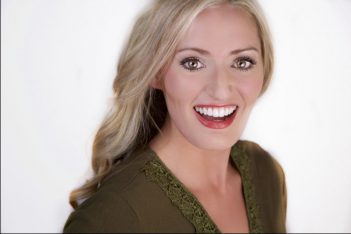 But it was inside her the entire time.

Quinn is now known for Texas’ Jenna’s Law, which mandates that schools and day care facilities train school-aged children, staff and parents on the signs and symptoms of abuse. She’s written a book, given TED talks, spoken to legislators and traveled the nation speaking out against sexual abuse. She’ll be the featured speaker at the April 27 Chaucie’s Place Breakfast in Carmel.

As a teenage girl, Quinn was abused by her basketball coach. To make herself less attractive, she would purposely over-eat. She’d cut herself. Her grades dropped. She hardly slept. She thought of suicide.

By age 16, she said she had completely changed.

She finally told her family in 2003, and after a trial that lasted more than a year, her abuser was sentenced to 20 years in prison.

After the trial, a reporter from the Dallas Morning News approached Quinn about doing an article. She was 17 at the time, but she and her family agreed.

“The very last thing he asked me is what I’d say to other victims, and I basically was very encouraging and asked them to tell, but not just tell someone, but tell someone who can get help,” Quinn said.

Then, something happened that encouraged Quinn to become an advocate for others.

“After the interview the reporter said, ‘Don’t worry, Jenna, we’re not going to put your name in the paper,’” she said. “And very instinctively, and I’d say supernaturally, something inside of me that usually isn’t part of my nature came up and I shouted, ‘No.’ And he had been a veteran journalist and he looks at me and looks at my dad and asks why, and I said, ‘Because the last thing you asked me to do is to encourage other survivors to speak up, and how can I do that if I’m too ashamed to have my name in the paper?’ I needed to lead by example, and he was very uncomfortable with that because I was a minor, and so he gave me time to think about that, but I didn’t need the time. I knew what I needed to do, and I’m very grateful that he honored my request and used my name in the paper.”

From that moment on, Quinn has worked tirelessly to pass legislation similar to Jenna’s Law, which was passed in Texas in 2009, around the nation. About 30 states have similar laws. The Indiana General Assembly recently approved similar legislation authored by State Sen. Mark Messmer (R-Jasper).

“The work is never done,” she said. “I feel like this work is lifelong for me.”