You are at:Home»Obituaries»Obituary: Roscoe Murray 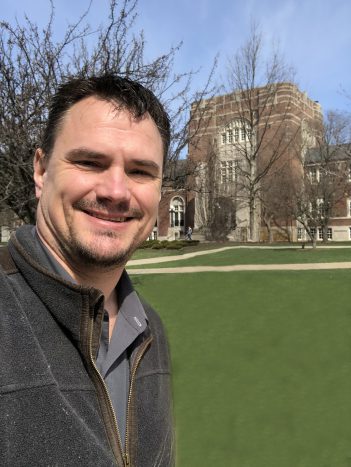 Roscoe “Rocky” Murray, 49, of Fishers, died unexpectedly April 9. He was born Oct. 18, 1968, in Indianapolis as the son of Kenneth W. Murray and Leona (McLain) Norrod.

Rocky received his bachelors degree from Gallaudet University in Washington, D.C., in 1993 and his master’s degree in 1998 from McDaniel College in Westminster, Md. Rocky married Bobbi Sue (Renfrew) on Aug. 30, 1997, in Frederick, Md.

He was currently the American Sign Language teacher at Anderson High School and had also worked for the Indiana School for the Deaf as a math teacher. Rocky was the co-sponsor for the sign language club at Anderson High School. He enjoyed doing projects around the house, hiking, traveling and watching his children play in sports. Rocky adored his family and loved spending time with them.

Visitation will be held from 10 a.m. to 1 p.m. April 13 at Brandywine Community Church, 1551 E. New Rd., Greenfield. A celebration of Rocky’s life will take place following the visitation at 1 p.m. Pastor Mark Wright will officiate.

A Go Fund Me page has been established for the family. To donate, visit gofundme.com/e2yztf-rocky-murray-memorial-fund. Friends may share a memory or a condolence at erleweinmortuary.com.

Arrangements are being handled by Erlewein Mortuary & Crematory in Greenfield.