You are at:Home»Current in Carmel»Carmel Business Local»Column: Hamilton County in the Great War

April marks the 101st anniversary of the United States’ entry into World War I. Two Hamilton county men who served were Hanson Booth and Harvey Harrison. 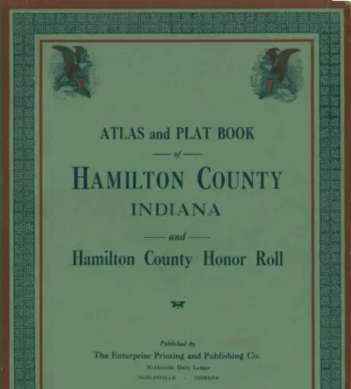 The 1922 Hamilton County Atlas has a list of soldiers involved in World War I. (Submitted image courtesy of Hamilton East Public Library)

The 1922 county atlas has a list of most of the soldiers in the war. The first part of the list is made up of the Gold Star soldiers; there were 10 killed in action, nine who died from a service-related illness or accident and 22 who died from the influenza epidemic.  Frank Huntzinger was the first to die in action, and the American Legion post in Noblesville is named for him.

The collection of names shows African-American participation in the war. There were some enlistees from Roberts Settlement: Terrell Roberts, Guy Winburn and Conrad Newsom. An enlistee from Noblesville was Broda White, the father of Murphy White.  These soldiers are usually given the designation of “colored” in the list, although it’s interesting that the five Armstrong brothers from Westfield were not. Their father had possibly come to Westfield as an escaped slave on the Underground Railroad. One of the brothers, Irven, was a teacher whose students wrote to him during the war.  The letters are preserved at the Indiana Historical Society.

The list also includes nurses Ruth Nettie Ale, Laura Lowe, Mrs. Halcey Lysett and Flossie Stahl. One of the nurses, Alma Lancaster, spent a year and a half overseas. She was a Quaker who graduated from Methodist Episcopal Hospital Training School in Indianapolis in 1913. She enlisted as a nurse in September 1917, arrived in France on Dec. 24, and served with Base Hospital 32. Her brother, Cyrus, served with the Navy at the Great Lakes Training Center but never got overseas. She returned to the U.S. in March 1919.  She lived to age 93 and is buried in Carmel Cemetery.

One person on the list had an unusual military career. Gray Hawkins enlisted in the Indiana National Guard 1st Field Artillery on May 4, 1917. According to his obituary in 1930, he was dismissed because of foot problems, so he went to Canada and enlisted there. The obituary said he had joined Princess Patricia’s Own Light Infantry, which is a famous regiment. However, actual Canadian records say he enlisted Aug. 5, 1918, in the 12th Reserve Battalion. He shipped overseas Aug. 27 and landed in Liverpool. He served in various places in England until July 3, 1919, when he was shipped home and discharged from the Canadian army. The listing points out that he was never officially discharged from the Indiana National Guard.