You are at:Home»Current in Zionsville»Zionsville Community»Zionsville deputy chief named 2018 Fire Inspector of the Year

Zionsville Fire Dept. Deputy Chief of Fire Prevention Joshua Frost has received the 2018 Fire Inspector of the Year Award. He was nominated and chosen to receive the award by his fellow members of the Fire Inspectors Association of Indiana. 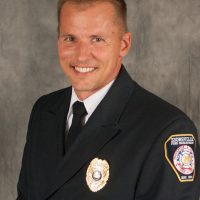 The award honors an FIAI member who has improved the safety of his or her community by consistently conducting code enforcement, plan review and public education on the need for code enforcement. A press release from the FIAI states that Frost is actively involved in the fire code adoption process in Indiana and has consistently provided input regarding fire code legislation.

Frost, who has worked for ZFD for 10 years, said the award sheds positive light on a job that’s sometimes misunderstood.

“It’s nice because too often the perception (of the fire marshal) is negative, like. ‘Uh oh, the fire marshal is here,’” Frost said. “But now there’s just an overwhelming response of congratulations and appreciation.”

Frost, a Lebanon resident, said the award has made people more aware of the department’s presence in Zionsville and has positively influenced the entire community.

“The responses on social media, on the department’s Facebook posts, have been very, very nice,” he said. “I think in general terms, any time people can see that the perception of the department is positive, it makes people feel good and reflects well on the community.”