You are at:Home»Current in Carmel»Carmel Community»Concentration camp survivor to speak at Holocaust Remembrance Ceremony

Frank Grunwald, the speaker for Carmel’s 2018 Holocaust Remembrance Ceremony, remembers when he was selected to die. 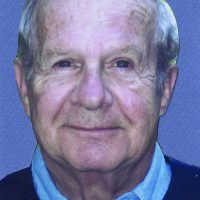 The Prague native had been transported to the Jewish ghetto of Terezinstady and then transported in cattle wagons, packed like sardines, to the Auschwitz concentration camp in Poland.

Dr. Josef Mengele, the Nazi’s notorius “Angel of Death,” was dividing young children into groups based on their age and physical ability. Grunwald’s brother, John, was put in the death line because he had a limp. Frank was placed alongside him, possibly due to his age. He was 12 years old.

“We didn’t know this meant a death sentence for us at the time,” he said. “But then one of the other prisoners reached out and grabbed me and quickly shoved me into another line.”

His brother wasn’t so fortunate.

When his mother found out what happened, she refused to leave John behind and chose to join him as the trucks arrived to take them to the gas chambers.

Grunwald helped sort the clothes for the new arrivals. He survived a death march and was moved to four other concentration camps before U.S. soldiers liberated him in May 1945.

“When I saw the U.S. soldiers, I knew the war was over,” he said. “We had no newspapers or radio, so we had no idea until we saw the soldiers. It was exciting but we had not eaten for a few days so we were very weak and could not properly celebrate, but it was a happy moment.”

Grunwald’s story is featured in the 2012 documentary “Misa’s Fugue.”

Grunwald is an Indianapolis resident who retired after working for GE for 30 years. A little more than a decade ago, he began speaking about his Holocaust experience. Previously, he said it was too painful to talk about.

Grunwald’s historical research will be the focus of his 10-minute speech at noon April 13 at the Studio Theater in Carmel. The event is free. Holocaust Remembrance Day is  April 12. According to the Jewish calendar, the holiday begins on the sunset of April 11.

Grunwald will talk about the thousands of concentration camps built in Nazi-occupied territories spanning a large geographic area from Italy through France, Germany, Austria, Poland and as far as Estonia and Latvia. He also will address the question of how Nazi Germany was able to organize and commit mass murder on such a large scale.