David Wood is performing in an Agatha Christie play for the first time and loving every minute of it. 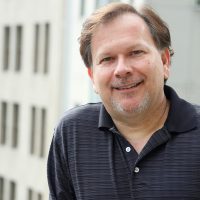 Wood is performing in the Civic Theatre’s production “And Then There Were None,” from March 23 to April 8 at the Studio Theater, the Center for the Performing Arts, Carmel.

“I re-read the book before we started rehearsing,” Wood said. “She was so good. It’s so clever, yet so accessible.”

Wood, a Lawrence resident, is playing Dr. Armstrong in the show.

“He is a very interesting character to play,” he said. “He wants to be perceived as very reserved and calm, when in reality he is a nervous wreck and carries a secret that haunts him. I also think he is oblivious to the fact that no one is buying his calm act, because he is far more obviously nervous than he believes. The curse of low self-awareness.”

Wood has been performing for more than 15 years. His most recent production was “Les Miserables” a few years ago. “Some of my favorite shows that I’ve done at Civic would include, of course, ‘Les Mis,’ but also ‘Noises Off,’ ‘Leading Ladies,’ ‘1940s Radio Hour’ and ‘Willy Wonka,’” Wood said. “Offstage, I do a lot of voice acting. I do commercials, a lot of corporate narration and e-learning, and I recently completed a private eye series of audiobooks.”

“My most recent show was ‘Assassins’ at Buck Creek Players. I played Charles Guiteau, who assassinated President McKinley,” he said. “That was one of my favorite roles. I played Bill Fordham in ‘August: Osage County’ at Carmel Community Players. Won an Encore (award) for that one (as best major supporting actor in 2015). Probably my favorite part was King Arthur in ‘Camelot’ at Footlite Musicals. I also did a couple of shows at Edyvean Repertory Theater before they closed.”