“Dressing in drag isn’t something I necessarily enjoy,” singer-actor John Vessels said. “Gluing on false eye lashes is like gluing on giant spiders. And the padding? I don’t have the right kind of curves. It takes a lot of scaffolding to make me look like a woman.

But it comes with the job. And it’s probably not what you are thinking. 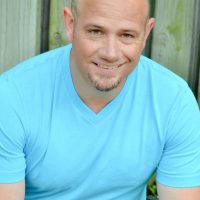 “Lillian Baxter is a lady all the way,” Vessels said. “She’s not a drag queen. They’re a little different in that Lillian is a nice lady.”

Lillian Baxter, aka John Vessels, and three other “nice ladies” – totally females – will present the world premiere of “Lillian Baxter & Friends: We Enjoy Being a Girl” at the Studio Theater at the Center for the Performing Arts in Carmel. The Actors Theatre of Indiana shows will be at 7:30 p.m. March 9 and 10.

“The show has a girl-power theme set in 1976, so wear your wide-legged pants,” Vessels said. “It’s a concert, a cabaret, with loads of comedy and lots of reminiscing about the good ol’ days.”

Supporting Baxter are the fictional vaudeville Humperdink Sisters, friends from Baxter’s showbiz past, and pianist Corky Weinstopper, Baxter’s third and favorite of her seven ex-husbands. A gay partner with Baxter’s pool boy, Weinstopper wears elegant pajamas when he plays. 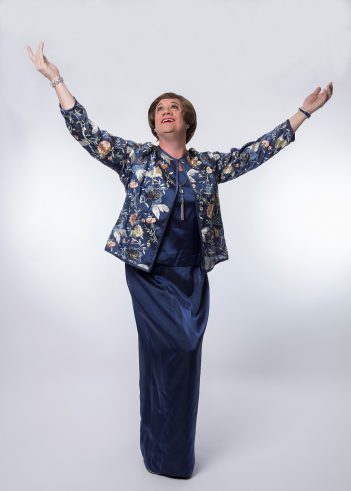 Weinstopper is actually Jay Schwandt, Vessels’ real-life partner who also arranges the music for all of the shows. The Humperdink sisters are all local – ATI co-founders Judy Fitzgerald and Cynthia Collins and special events and entertainment coordinator for the Indiana State Fair Commission, Bobbi Bates – all standout vocalists.

“The twist on our show is that the sisters haven’t realized they are not little girls anymore,” Vessels said. “They are trying to find their grown-up voices.”

Vessels created Lillian as a has-been MGM movie star. Actually, he  “stole” it from himself after he originally had set out to write the show for a female singer. Then one day, Schwandt asked Vessels if he thought the character could be played by a man.

“Oh, maybe,” was Vessels’ response. “Then what we found out along the way was that I could sing in the same key as an Irish tenor and an old belter from the MGM days and Julie Andrews. I could sing in the old belter keys, so we wrapped the first show (there are now three) around that. From there I just made her up.”

The final character was a mediocre 1950s-60s performer during the days at MGM, who advanced to a short TV career on such hit shows as the “Thrifty Vittles Happy-Time Song Hour.” Despite her failure to reach real stardom, that never stopped her from spinning her tales with never-ending pride and joy.

“She is a classy dame, no matter the circumstance,” said Vessels, a familiar face on the Beef & Boards Dinner Theatre stage.

What Vessels likes most about portraying Baxter is the reaction he gets from the audience.

“The crowds have been really, really responsive,” he said. “The shows are funny, but there’s also a lesson to be learned and a little heart to each show that kind of surprises the audience. When that dawns on them, well, watching that light come on thrills me.”

“Lillian Baxter & Friends: We Enjoy Being a Girl”

Studio Theater at The Center for the Performing Arts, Carmel