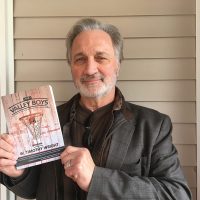 Tim Wright with a copy of his book “The Valley Boys.” (Photo by Mark Ambrogi)

The book is the story of the 1957-58 Springs Valley Black Hawks, who reached the state high school basketball semifinals. The season was the first of consolidation of West Baden and French Lick high schools.

The book is available through Lulu Publishing at lulu.com . For more, visit wtimothywright.com.

“Tim Wright weaves the story of how this unusually successful basketball season brought two towns together,”’ former Milan star Bobby Plump said in a press release. “People told me they thought the days of the ’David vs. Goliath’ Indiana tournament basketball games could never happen again. But only four years later, here comes little Springs Valley to the state tournament Final Four. The writer takes you on the journey with folks across the state who thought that the ‘Milan Miracle’ would be repeated with another small-town team.”