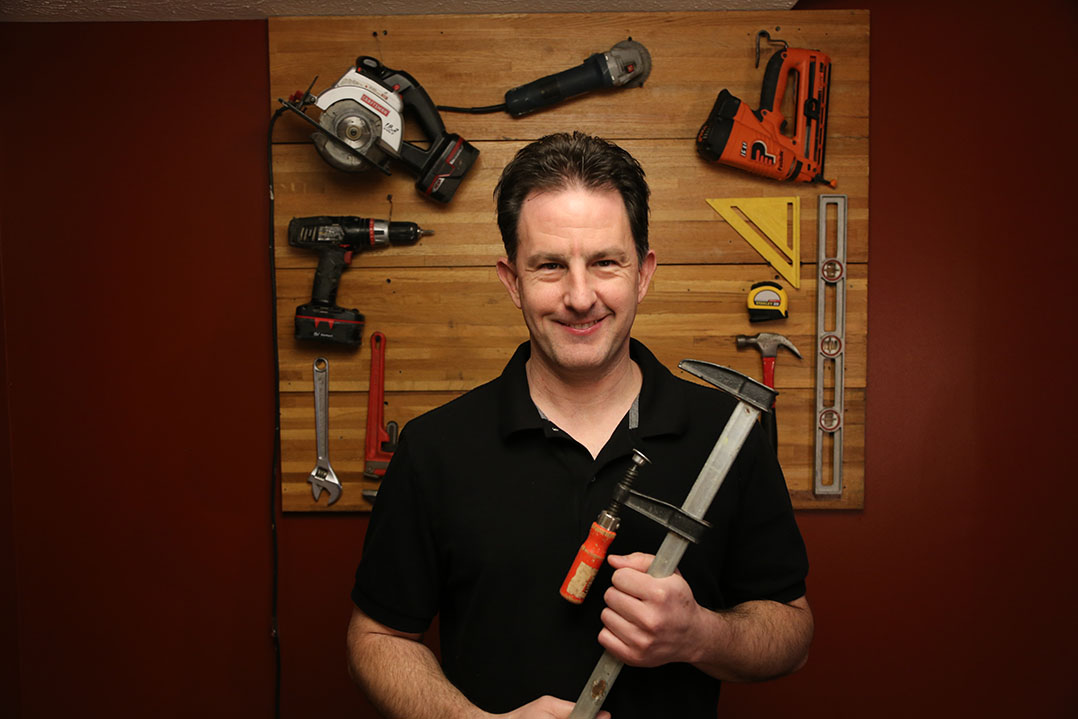 Carmel resident Lou Wozniak’s YouTube channel of how-to videos recently hit 10 million viewers. His videos have covered everything from how to build a fireplace to how to learn flowboarding. (Photo by Ann Marie Shambaugh)

Lou Wozniak’s future as a YouTube personality started with a simple desire.

“I wanted to build a fireplace behind my house,” the longtime Carmel resident said. “I thought I didn’t know anything about bricks or how to build a fireplace, so I thought I’d look on YouTube and surely someone will show me how to do it. There wasn’t anything. There was no one who would show you the whole thing end to end. I was kind of frustrated.”

So, Wozniak got books from the library and spoke with some bricklayers.

“I tried a few things myself, and I just figured it out,” Wozniak said. “I made a video that I would have wanted to have. I put it up and forgot about it. But then I looked back and it was No. 1  (in views) when you type in brick fireplace for three years (on YouTube). It’s still No. 4. It got hundreds of thousands of views.”

The biggest beneficiary of the videos has been his wife, Karen.

“It has been a huge help to have Lou doing all of the projects that he does,” Karen said. “We have done so many upgrades and fun things to our houses that we would not have necessarily done otherwise. For example, we would never have had a ping pong table lower from the ceiling like in our last house, or our two-story chandelier lower for cleaning and bulb replacement like we do in this house.”

Karen’s favorite project is still the first one, the outdoor fireplace with a built-in grill.

“We love to use our deck and backyard, and this has really enhanced the whole atmosphere back there,” Karen said. “It was also fun because I designed it and he built it, so it was a bit of a joint effort. He did a really nice job, and it came out beautiful.”

Wozniak, 50, has a bachelor’s and master’s degree in mechanical engineering from the University of Illinois. Wozniak has been with AT&T since 1999.

“I’m a software engineer by trade,” Wozniak said. “I love building things, anything with tools. I just love working with my hands. My idea of a good vacation would be locked alone in my workshop for a week. It’s not a job, it’s just fun for me.”

Wozniak realized that people liked his videos and he enjoys making them.

“I enjoy editing,” Wozniak said. “Editing a video is like editing a paper. As an editor, you make sure there is no redundancy. So, if I have eight screws to put in, I’ll show one and won’t show all the others.”

Wozniak, who said he likes to teach, said many other how-to videos drag on and on.

“I try to not waste the viewers’ time, get to the point and make sure they understand and then move on,” Wozniak said. “Every week, I get comments saying, ‘This is how all how-to videos should be done.’”

Wozniak said he usually shoots an hour of footage and trims it down to a video that is five minutes or less.

“It is a labor of love. I wasn’t intending to make money,” Wozniak said. “I didn’t realize you could make money, but after awhile YouTube started sending me emails saying they wanted to put ads on my videos. For a long time, I thought, ‘Go away, I don’t want your silly ads.’ Then, finally I decided to try it. The first month I made $30 and I thought no big deal.”

However, the monthly check total started growing and he made approximately $800 for November 2017.

Typically, viewers come to Wozniak’s YouTube channel for specific projects, so he doesn’t have as many subscribers as many other channels with his number of views.

“I have a lot of one-hit wonders,” Wozniak said.

His friend, Dave Claus, who previously lived near Wozniak in Carmel, helped him with a video comparing the Big Green Egg and Kamado Joe grills.

“I think people like his videos because he approaches them from an engineering standpoint and user-testing standpoint,” Claus said. “He tries to put logic in it.  He likes to explain things, more like a teacher.”

Other popular videos include how to fix a dripping faucet, how to make a pottery wheel and a vacuum comparison between Roomba and Neato.

For a list of all of Wozniak’s videos, sites.google.com/site/howtolou/.

Wozniak and his daughter, Lexi, a Purdue freshman, are passionate about flowboarding.

“They have an artificial surf machine at the Monon Community Center called a FlowRider,” Wozniak said. “We’ve been doing it since it opened, and we compete every year.”

Wozniak said he has 10 videos on how to begin flowboarding and how to perform certain maneuvers.

If that wasn’t enough to keep Wozniak busy, he also has hosted a foosball league in his house twice a month for 15 years. And, naturally, there are some videos on techniques for that as well.

“We take it very seriously,” Wozniak said. “It’s not just spinning around. I invented three products that are for training.”

His son, Luke, a car mechanic, lives in Carbondale, Ill., and shares his father’s love of foosball.