You are at:Home»Current in Zionsville»Zionsville Cover Stories»A Hollywood ending: Former Disney artist continues to defy the odds in new hometown 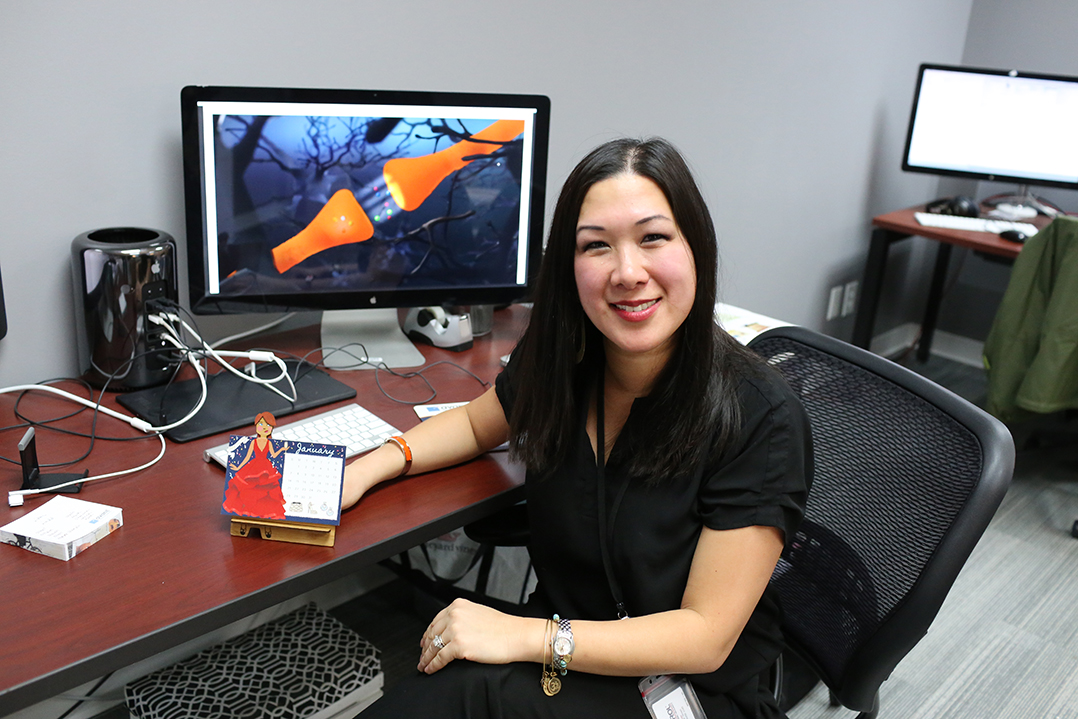 For Amy Duarte, moving to Zionsville was the perfect Hollywood ending.

In her case, it included saying goodbye to her career as a visual effects artist for major film studios and a cross-country relocation from Los Angeles to Indiana.

Now, Duarte, who has been defying the odds since she was born almost completely deaf in Indonesia, works as a motion designer at Avant Healthcare in Carmel, a far cry from Tinseltown. But she couldn’t be happier.

“It’s almost like the marriage between the medical field and the artistic field. It just worked out perfectly,” said Duarte, who creates graphics and videos to make medical concepts understandable for the average consumer. “I’m using the skills that I used in Hollywood here.”

Amy Duarte created this image of the Jakarta Marketplace, which she often visited as a child. (Submitted photo)

Duarte, 40, spent the first decade of her life in Jakarta, a place that provided few opportunities for people with disabilities despite being the largest city in Indonesia.

So, when she was 11 years old, her parents sent her to live with her aunt and attend school in Quebec, where she received a better education than she could have back home. Two years later she moved back, but not for long. In 1991, the entire family moved to Los Angeles.

It was a welcome move for Duarte, who had a lifelong dream of working in the film industry.

“(As a kid) I was watching the Disney cartoon ‘Cinderella’ and was magically enthralled by it, the way the mice would make the dress for Cinderella and the part where they were singing, ‘We can do it, we can do it,’” Duarte said. “It just stayed with me, the magic of drawing something and bringing it to life. I just knew it’s something I wanted to create.”

Duarte enrolled in classes at California State University, Northridge and caught her first big break during her freshman year. She had been mailing comic book-style letters to her friends, using cartoons to depict life events. One friend had left a letter on a coffee table when a commercial director stopped by for a visit and requested to connect with the artist behind the images.

That led to a job creating commercial storyboards for McDonald’s when Duarte was just 19 years old. And that was just the beginning. 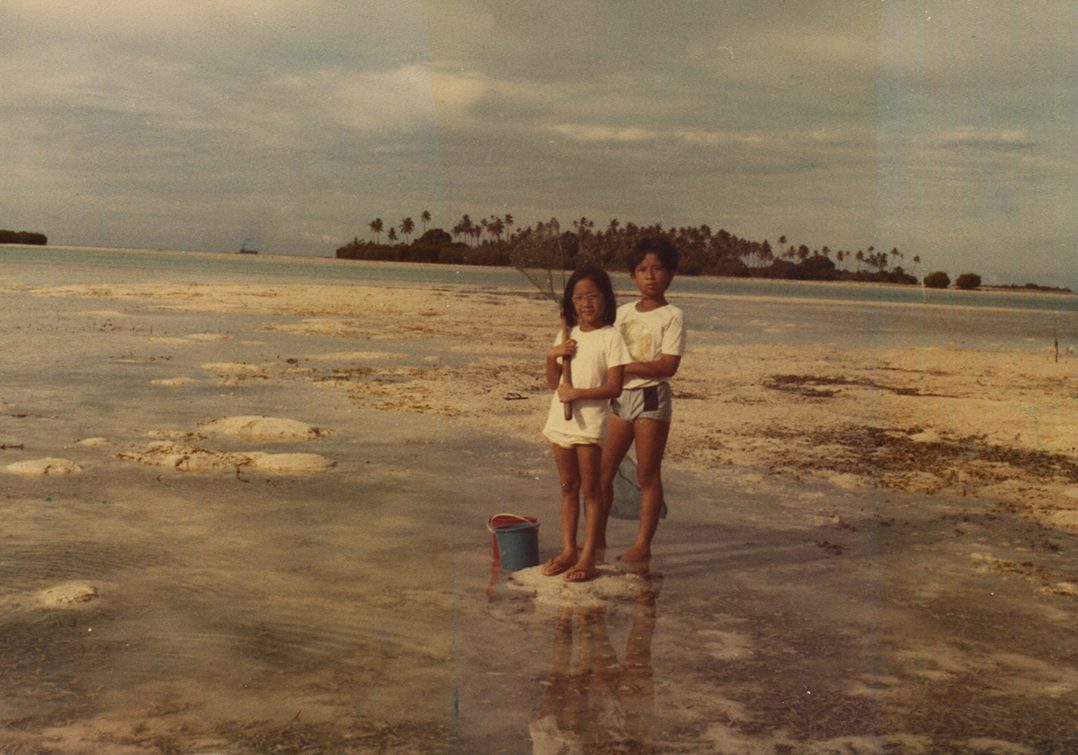 Amy Duarte and her brother, Randy, pause in 1984 on the Indonesian island of Java, where they grew up. (Submitted photo)

During her junior year, Duarte landed an internship with Disney. After graduating college, the studio hired her full time. She began as a layout assistant during a period when studios were transitioning to digital methods of filmmaking. Her youth worked to her advantage.

“I was a relative newcomer to the field, but I was able to host little workshops to teach the veterans digital media,” Duarte said.

Duarte rose through the ranks at Disney and eventually worked for other studios, too. Her first major credit was as a compositor on “Sky Captain and the World of Tomorrow.” Other works include “Fantastic Four,” “Mr. & Mrs. Smith,” “Spider-Man 3,” “Iron Man 3” and many others.

As an artist, Duarte was responsible for creating backgrounds, special effects and modifications to real life. In the movie “Fever Pitch,” for example, the director tasked her with sculpting some of the former professional athletes-turned-actors to resemble what they looked like during their playing days years earlier.

Clara Chan, a computer graphics supervisor at Sony Pictures Imageworks Canada, worked with Duarte on a few movies in Los Angeles. She described Duarte as kindhearted and trustworthy, both personally and professionally.

“Amy is a very kind person who is always optimistic and cheerful. She is very animated and brings a fun energy to everywhere she goes,” Chan said. “She is a hard worker who always does her best and is eager to learn. She is extremely creative and has a unique artistic style in her design.”

Duarte experienced the frustrations of anyone working in a Hollywood visual effects studio.

“Sometimes film directors can be like a kid in a candy store,” Duarte said. “They don’t know what they want because there are too many options.”

She faced unique challenges as well. Because she is dependent on reading lips during a conversation, she often had a difficult time during sequence review meetings in crowded, dark theater rooms.

“It wasn’t easy,” she said. “There were days I felt defeated, but I never gave up.” 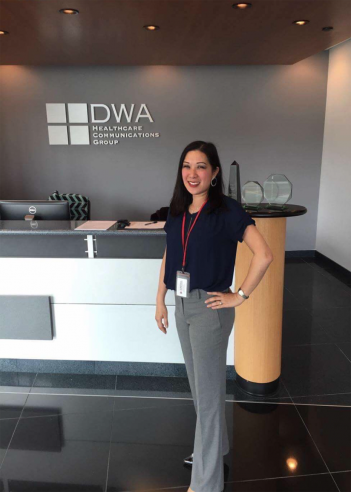 Amy Duarte pauses in the lobby of Avant Healthcare in Carmel, where she works as a motion designer. (Submitted photo)

After more than two decades living her Hollywood dream, Duarte and her husband, Max, decided they were ready for a scene change. They had visited Zionsville often to visit Max’s sister, Susana Suarez, a member of the Zionsville Town Council, and had long felt it would make a good home, Duarte said.

The couple and their two young children moved in May 2016 and have not been disappointed.

“Everybody here has been so welcoming,” Duarte said. “I really see the meaning of Hoosier hospitality.”

Duarte’s path to Zionsville was not the traditional route. Through her struggles and successes, she’s followed her life motto: Trust the journey.

“It was the harder path, but at the end I see that there was a purpose for it,” Duarte said. “Growing up there were times when I questioned God and it felt so unfair. I saw all my friends who didn’t have the struggles I did, but in the long run I saw that God had a purpose for me. Maybe I’m still figuring out what my ultimate purpose is.”

Despite her many accomplishments, Duarte is still dreaming. She wants to one day have an art exhibition of her own in or near Zionsville.

So, in many ways, her move to Zionsville was just the beginning. 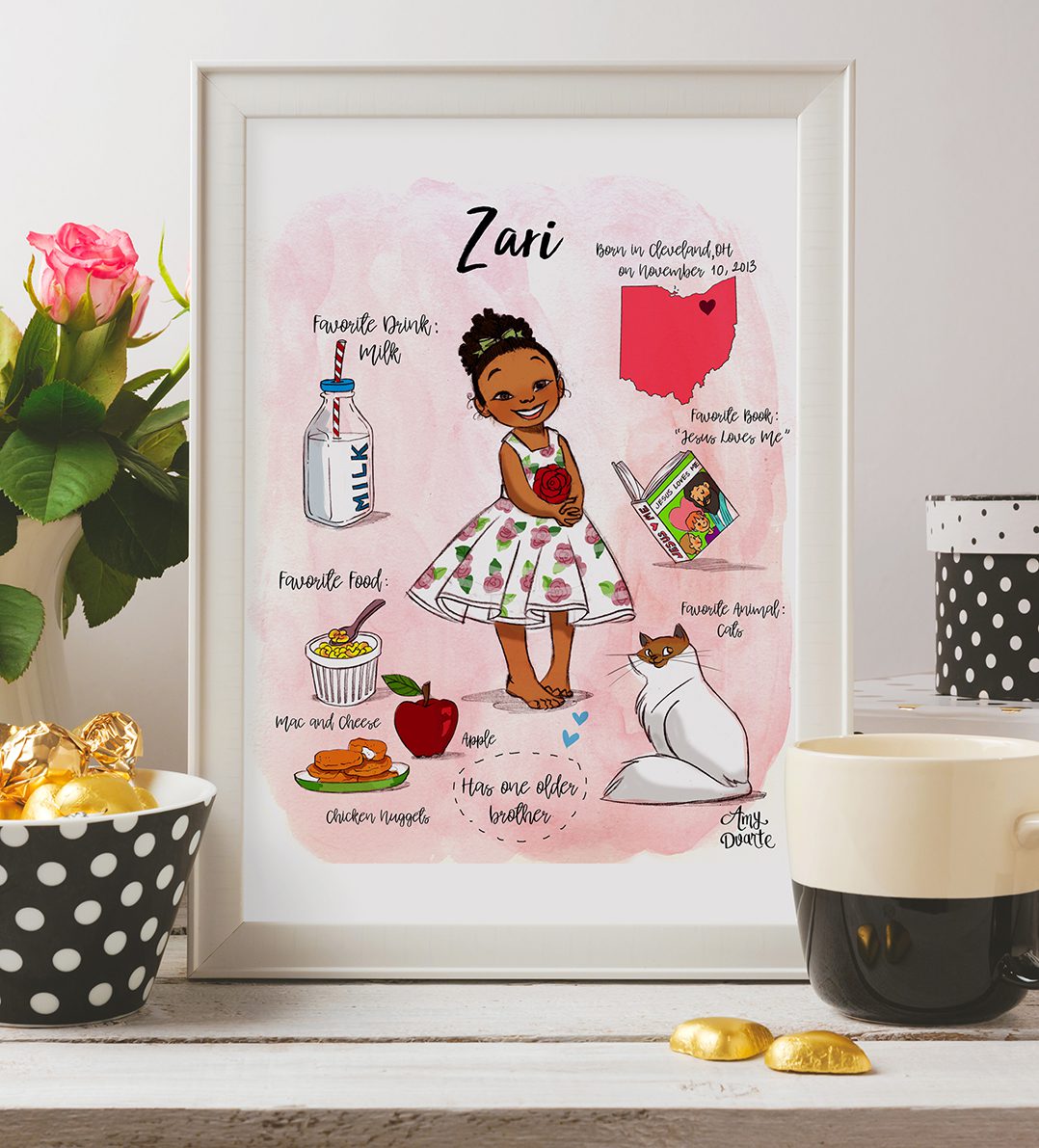 Amy Duarte sometimes misses working in Hollywood, but she’s letting her creative juices flow through a project that makes stars out of local children.

Sweet Little Biographies allows parents to capture some of their favorite aspects of their children through a personalized design by Duarte. She draws the child doing one of their favorite things and surrounds the image with things he or she loves, such as favorite foods, movies or pets.

“Parents can capture their child at that moment,” Duarte said.

The project has been so successful that some parents have said they want a new drawing every year, Duarte said. She has a waitlist for orders.

“I’m very honored that I can do this to make a lot of local moms happy,” Duarte said.