James Bednarski is the new chairman of CarmelFest, the annual two-day Fourth of July festival put on by the Carmel Rotary Club. 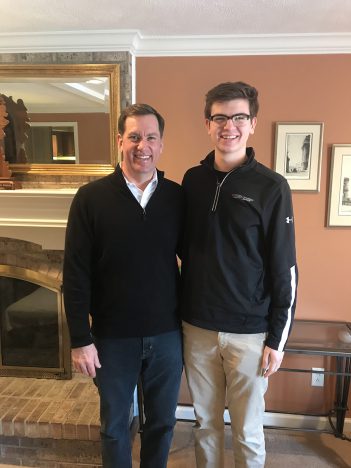 From left, James Bednarski and his son, Connor, are working together to plan the 2018 CarmelFest event. (Photo by Adam Aasen)

Moreover, he will get assistance from his 16-year-old son as Bednarski presides over the event with the largest attendance in Carmel.

But Connor Bednarski won’t just be performing normal volunteer duties at the event. He’s on the CarmelFest board with his dad this year and will be in charge of a new section of CarmelFest: ExtremeZone.

The new concept at the Center Green will provide entertainment for teenagers too old for the Kid Zone but too young for the North Zone. Organizers are considering attractions such as Monster truck inflatables, a “Ninja Warrior” obstacle course and other interactive activities.

Connor will be in in charge of it all.

James said volunteer work is one way he likes to bond with his son. They’ve worked side-by-side at CarmelFest, the International Arts Festival, at food pantries and other community projects. They enjoy working at the Merciful H.E.L.P. Center at Our Lady of Mt. Carmel Church. The center provides services such as a food pantry and furniture donations for those in need.

“It’s actually kind of fun,” James said. “We get to spend time together and responsibilities together. It’s time for both of us to grow.”

James said he never tries to force anything on his son, but Connor is naturally  interested in serving others.

“It’s kind of an open invitation,” Connor said. “It’s usually stuff I like.”

Connor is pretty busy overall. A Carmel High School junior, he plays bass clarinet for the school band. He played soccer with Carmel Dads Club and is a part of the Do Something Club, a volunteer organization, at school. His latest big project is being a candidate for the Leukemia & Lymphoma Society, Indiana Chapter’s 2018 Student of the Year. As part of his campaign, he’ll try to raise as much money as he can for research. The winners who raise the most money will be honored March 17.

His father will have a busy year, too. After five years volunteering for CarmelFest, James is succeeding chairman Gary Sexton. It’s a big job that takes year-round planning and includes the city’s fireworks display, the Fourth of July parade and the two-day festival that has several different zones and includes games, amusement park rides, food vendors, live music, booth space and more. It’s a massive undertaking that’s mostly volunteer-driven. Although the City of Carmel provides grant money, the Carmel Rotary Club organizes the event and raises money to pay for the entire operation.

“It’s probably the biggest event in Carmel,” James said. “It’s a way to give back on a really big scale.”

All of the money made from CarmelFest, with a big lift from areas such as KidZone, allows the Carmel Rotary Club to provide grants to local nonprofits every year.

James has big plans for 2018. One thing that will be convenient for year’s guests is the new Veterans Way Parking garage, which creates about 700 parking spaces next to the festival.

For more about CarmelFest and how to volunteer, visit carmelfest.net.