For Rebecca DeVries McConnell, children’s theater is a blast. 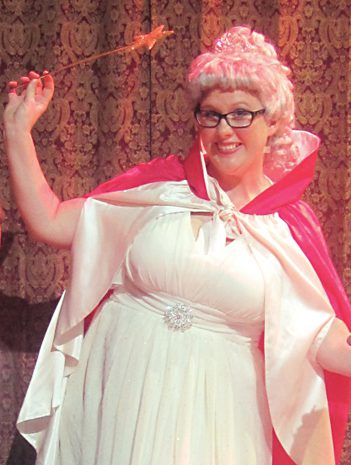 Rebecca DeVries McConnell will reprise her role as the “Fairy Godmother’ at Beef & Boards. (Submitted photo)

“The kids don’t hesitate to react vocally when they are excited, and it’s thrilling to get that instant feedback from them,” DeVries McConnell said. “One of my favorite parts about doing the Pyramid Players productions at Beef & Boards is doing the meet-and-greet and autographs that follow the show. The children are delighted to meet us, and it’s such a treat to converse with them in character about the story.”

DeVries McConnell will perform as the Fairy Godmother in “Cinderella” Feb. 17 to March 17 at Beef & Boards Dinner Theatre. She played the same role in a 2012 production at Beef & Boards.

“She’s a really feisty and fun character,” DeVries McConnell said. “This is a very funny interpretation of the classic fairy tale. Children will recognize their favorite characters but will enjoy getting to know some new ones that were adapted into this version.”

The Pyramid Players is the Beef & Boards’ Live Theatre for Kids team, actors and producers.

DeVries was the Sea Witch in the Pyramid Players’ production of “The Little Mermaid” in 2016. She also performed in “The Music Man” and “Godspell” at Beef & Boards.

Most recently, DeVries played the Lady of the Lake in “Spamalot” at Footlite Musicals.

DeVries McConnell, who has lived in Carmel for 10 years, graduated from Hamilton Southeastern High School. She studied musical theater at Hope College in Holland, Mich., and theater education at the University of Indianapolis.

“Theater is both a passion and a profession for me,” DeVries McConnell said. “When I am not performing on stage, I work as a private audition coach. I work one-on-one with students to help them prepare for auditions at their schools or in the community.”