You are at:Home»Current in Geist»Geist Community»Mitchell enters PBA Hall posthumously

It’s only fitting that Mike Aulby will help induct the late Don Mitchell into the Professional Bowlers Association Hall of Fame.

After all, it was Mitchell who helped launch Aulby’s Hall of Fame career, sponsoring Aulby for his five years on the PBA Tour after Aulby graduated from Franklin Central High School. 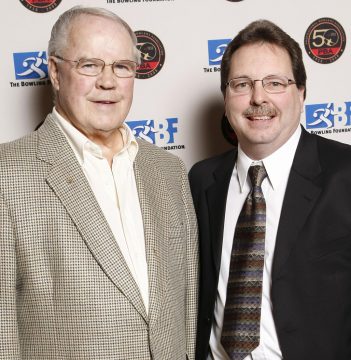 Don Mitchell, left, and Mike Aulby at the PBA Gala in 2009. (Submitted photo)

“It was a deal I couldn’t lose,” said Aulby, a Carmel resident who won his first PBA title at age 19. “If I had a bad year, they would have taken the loss. If I had good year, they took their expense money back. It was a no-risk deal for me and one that made it much easier to compete than have things over your head. And to have someone behind you like Don, it was never about the money or bottom line. It was more about the industry, the people and the sport.”

Royal Pin Leisure Centers founder Mitchell will be the first bowling proprietor to be inducted into the Hall of Fame exclusively for his role as an owner. The Hall of Fame dinner will be held in Indianapolis Feb. 17 while the PBA Tour is holding its Go Bowling! PBA 60th Anniversary Classic tournament at Woodland Bowl, 3421 E. 96th St., Indianapolis. The tournament starts with a practice session Feb. 13 and ends with the ESPN live stepladder finals at 1 p.m. Feb. 18.

Woodland Bowl, which is the only center to host every major PBA tournament, is part of the Royal Pin group that Mitchell once owned. He sold it after his retirement.

Close friends of Aulby and Mitchell remained co-owners of Arrowhead Bowl in Lafayette.

“Don traveled overseas with me many times,” said Aulby, who was inducted into the Hall of Fame in 1996. “Don was more than a businessman, a sponsor and partner, he was much more than that.”

Aulby said Mitchell would open his home to bowlers when they were in town. Mitchell, who lived in Carmel for several years near Woodland, was living in Geist when he succumbed to cancer in 2012 at age 80.

‘He loved his home at Geist,” his daughter Donna Leimgruber said. “When we had him in the hospice, he begged and begged to go home. We got him home, and he passed away a day-and-a-half later.”

Leimgruber, a Greenwood resident, and her two brothers, Craig, Naples, Fla., and Dave Mitchell, Indianapolis, will be there to accept the honor along with Aulby. The only sadness is that the honor came posthumously, Leimgruber said.

Leimgruber said her father considered one of his biggest accomplishments was  becoming the 125th person to bowl 50 years in the United States Bowling Congress national tournament. Mitchell, whose health was failing, only needed to bowl one frame to achieve that in 2010.

“When they flashed his picture up around the whole center, I’ve never seen him prouder. So I can’t even imagine how he would feel about this award,” Leimgruber said.