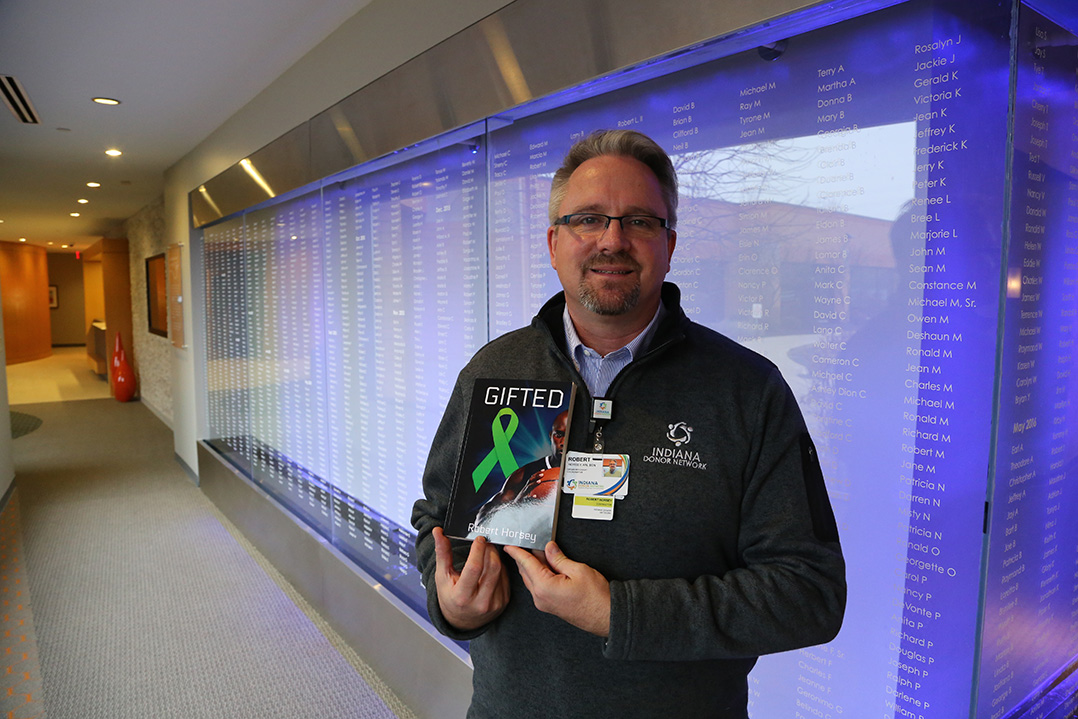 Robert Horsey displays a copy of his book, “Gifted,” at the Indiana Donor Network. (Photo by Ann Marie Shambaugh)

Robert Horsey has made a career of assisting donor families and recipients as they go through the heart-wrenching process of organ donation.

But that wasn’t enough.

In November, the Carmel resident published a novel titled “Gifted,” a story he hopes will dispel common myths and shed light on the importance of the topic.

“While it’s extremely unfortunate that people pass away and people lose their family members, (organ donation) is a precious gift that can be passed on to help people in need,” said Horsey, an organ recovery coordinator with the Indiana Donor Network. “If I can be a part of that directly by working with the Indiana Donor Network, it makes me extremely happy. If I can help people make that decision through my book, it’s icing on the cake for me.”

Horsey, 49, is pleased with the results since the book’s release. After reading it, his twin brother signed up to be an organ donor. 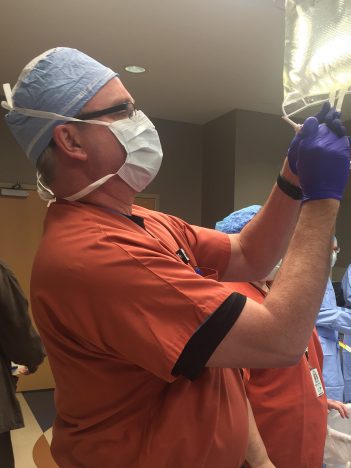 Robert Horsey prepares an IV line in his role as organ recovery coordinator with the Indiana Donor Network. (Submitted photo)

As an organ recovery coordinator, Horsey never knows what he’ll see in a day. He works a 24-hour shift every three days, ready to spring into action if a potential organ donor is identified anywhere in Indiana. When that happens, he travels to the site of the donor to help ensure the organ recovery goes smoothly. A family services coordinator walks the donor’s loved ones through process.

One organ donor can save up to eight lives, and tissue can be transplanted to 75 recipients. But for the family of the donor, the lifesaving choice happens on one of the worst days of their lives. Emotions run high, Horsey said, for the families and himself.

“They understand their loved one is gone, but they have now grabbed onto this opportunity, and it’s keeping them afloat,” Horsey said. “It’s up to us as clinical bedside people to not only take care of that donor but take care of that family as well. It’s an honor to work with them.”

Horsey can get a call at any time of the day or night, and sometimes his shifts stretch to the 30-hour mark or beyond. But it’s all worth it, he said.

“While it’s grueling, I can tell you it’s very rewarding,” he said.

Horsey has worked in organ donation since 2004, when he became the procurement transplant coordinator at Mid-America Transplant in St. Louis, Mo. “Gifted” is loosely based on Horsey’s experiences in Missouri.

Since moving to the Indianapolis area in 2006 to be near family, Horsey has worked at St. Vincent Indianapolis Health and IU Health, where he advocated for patients in need of transplants.

Bob Loveless, who had a heart transplant in 2009, viewed Horsey as working to save his life as he waited on the transplant list.

“There’s a certain bond that happens there,” said Loveless, a 69-year-old retired police officer who lives in Princeton, Ind. “(Horsey) was really, really thoughtful. He went above and beyond.”

Loveless said he was disappointed when he got assigned to another coordinator after the successful transplant, but he and Horsey have kept in touch.

Originally written as a screenplay, “Gifted” tells the story of a mother dealing with the sudden death of her son and his decision to donate his organs. Horsey spent two years writing his debut novel, and he hopes to soon author another book dealing with the topic.

“Most of the movies I see about transplant are pretty inaccurate,” Horsey said. “There’s enough drama built around the donor situation. There’s really no need to overdramatize it. When you overdramatize it, you lose the beauty of it, so I decided if I was going to write this it was going to be written as accurately as possible.”

“Gifted” is available for $12.99 at Amazon.com. Twenty-five percent of net proceeds will be donated to the Indiana Donor Network Foundation’s scholarship fund. Learn more at gifted-thenovel.com.

To register to become an organ donor or learn more about the process, visit IndianaDonorNetwork.org.