You are at:Home»Current in Carmel»Carmel Business Local»The Little Gym, other businesses announced for Merchants’ Square

Steve Barger and his wife, Suzanne, fell in love with The Little Gym concept when they took their son, Sebastian, in Virginia Beach, Va., when he was 5 months old. 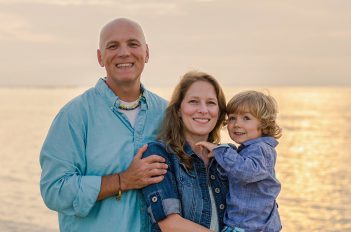 Steve and Suzanne Barger were inspired to open a The Little Gym franchise after visiting one with their son, Sebastian, in Virginia Beach, Va. (Submitted photo)

“When we were living in Virginia Beach and considering purchasing a The Little Gym franchise and moving back to Carmel, Merchants’ Square is where we envisioned opening,” Barger said. “As a prior long-term resident of Carmel, I witnessed the struggles of the iconic Merchants’ Square area and thought that we could help with the rebirth of the area. The Little Gym is a destination location, and there is no better location than Merchants Square for that type of retail.”

The Bargers lived in Carmel from 2007 to 2014 before moving to Virginia and then returning last summer.

The Little Gym is designed for ages 4 months to 12 years, helping children with their flexibility, strength and coordination. Barger said the 4,800-square-foot space his business is moving into has been vacant for several years.

A fifth business, Ultimate Ninjas, is in negotiations to move into Merchants’ Square, franchise owner Jeff Piejak said. Ultimate Ninjas offers a variety of obstacle courses for all ages and skill levels. Obstacles include monkey bars, climbing walls and swinging ropes. Ultimate Ninjas is based on the “American Ninja Warrior” TV show.

The other three new Merchants’ Square tenarts are Lakewood Family Dental, which will offer preventive, general and cosmetic dentistry. This will be the fourth Indiana location for Lakewood, which is slated to open in February.

Parvin’s Tailoring is set to open a full-service tailor shop in February.

The Indiana Bureau of Motor Vehicles plans to open a new branch next to The Little Gym and Goldfish Swim School in the spring.