You are at:Home»Current in Carmel»Carmel Cover Stories»The heart of a hero: Captain reunites with bombing victim, retires after 36 years with CFD 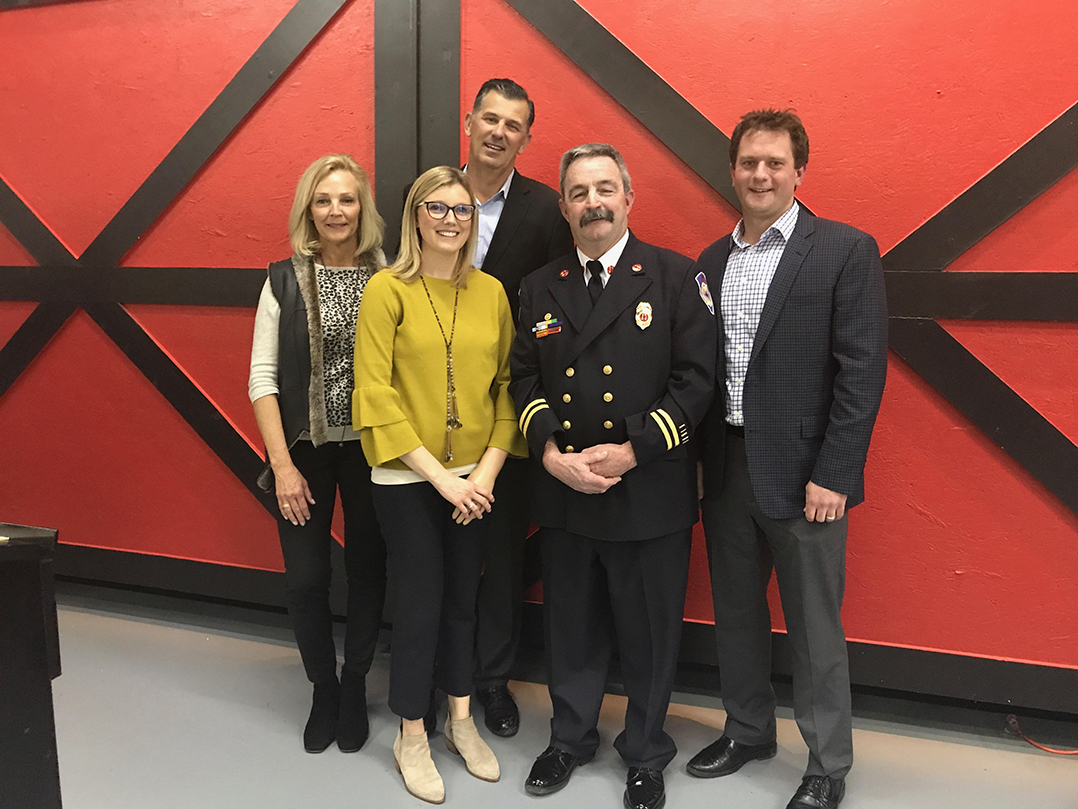 Almost anyone who’s met Carmel Fire Dept. Capt. John Moriarity would call him a hero, but he gives all of the credit to God, the City of Carmel, his fellow firefighters and his wife, Lori Ann.

“The City of Carmel and the Carmel Fire Dept. gave me the opportunity of a lifetime,” Moriarty said. “They gave me my dream.”

The community gathered at CFD headquarters Jan. 11 to celebrate Moriarty’s 36 1/2-year career during a retirement ceremony.

Throughout his career, Moriarty has found a way to give back to the community that gave him his dream.

Moriarty is one of 10 children, but the only child to follow in his father’s footsteps as a firefighter.

As a teenager, Moriarty would spend the night at his father’s station in Indianapolis. When Moriarty turned 21, he tried to apply for a position with the Indianapolis Fire Dept. to work alongside his father. IFD was downsizing at the time and Moriarty heard about a new station opening in Carmel.

With $600, an old pickup truck and long hair, Moriarty came to Carmel and spoke with the city’s first paid fire chief about a job with CFD. The chief gave Moriarty an application and a recommendation to get his hair cut.

Moriarty was hired by the Carmel Fire Dept. on Oct. 6, 1981, as one of the first recruits for the new  Station 44 on Main Street. He would open the station as a rookie and close it down as a house captain when the station was torn down and rebuilt in 2015. 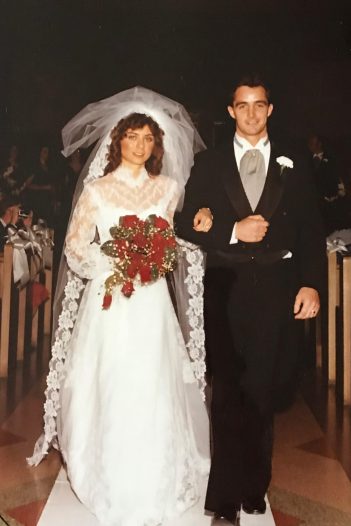 John and Lori Ann Moriarity at their wedding. They met in 1981, just weeks after John began working for the Carmel Fire Dept. (Submitted photo)

A few weeks into his training, Moriarty found the love his life, Lori Ann. She was watching the firefighters train and caught Moriarty’s eye from across the parking lot.

The flames grew quickly between the two, and a few weeks later, Moriarty found a bag of Hershey’s Kisses on the windshield of his pickup truck from Lori Ann. Moriarty kept the package tucked inside a fire hat and helmet in his locker for 35 years.

“I know it’s just a bag of candy, but to me it’s like gold,” Moriarty said.

Moriarty presented the original bag of Hershey’s Kisses to his wife during his retirement ceremony, along with four roses representing each of their children: Timothy, 32, Andrew, 27, Ryan, 21, and Elizabeth, 17.

That day, Moriarty and his wife were shopping for a toy for their 5-year-old son, Timmy, at the Castleton K-Mart when an explosion occured. Moriarty heard cries for help and told his wife to run to the service desk and have them “send the farm” and wait outside for him. Moriarity pushed through the panicked crowd and found 5-year-old Erin Bower Patterson, her clothes burning and body bleeding, in the arms of her father.

The blast came from a makeshift bomb inside of a tube of toothpaste, which went off when Patterson pulled the tube from the shelf. The explosion blew off her left hand and damaged her left eye.

Moriarty and Dr. Louis Profeta, a medical student at the time who is now an emergency physician at St. Vincent Hospital, cleared the girl’s airway with a turkey baster, used sandwich bags as gloves, fashioned pillowcases into tourniquets and delivered life-saving aid to the young girl.

The story made national headlines, and Moriarty received the Distinguished Service Award from CFD for his heroism.

When his fellow firefighters asked Moriarty what he’d like for retirement, he said he’d love to meet Erin Bower Patterson, give her a hug and know she was OK.

Moriarty got his wish during his retirement ceremony, when Chief Haboush told the crowd the harrowing story and then asked Patterson, who was sitting just behind Moriarty with her husband, mother and father, to stand up. Moriarty’s eyes filled with tears as he opened his arms to embrace Patterson.

Patterson lives in Carmel with her husband, Nathan, and their three young children.  She said she doesn’t remember the incident, but her parents certainly do.

“I was their child, their baby, and Moriarty saved my life,” Patterson said.

“We’re very grateful that he was there and he was willing to help,” said Patterson’s father, Kevin Bower.

Throughout his career, Moriarty has saved countless lives by running straight toward danger.

“I just have to help people,” Moriarty said.

Moriarty will soon return to the fire dept. as the community liaison officer for the administration. In his new position, he will assist in public education, represent the department throughout the state and mentor newly promoted officers.

“To be able to help someone in their time of need is a great feeling, sincerely,” Moriarty said. “All in all, this is what life’s about.” 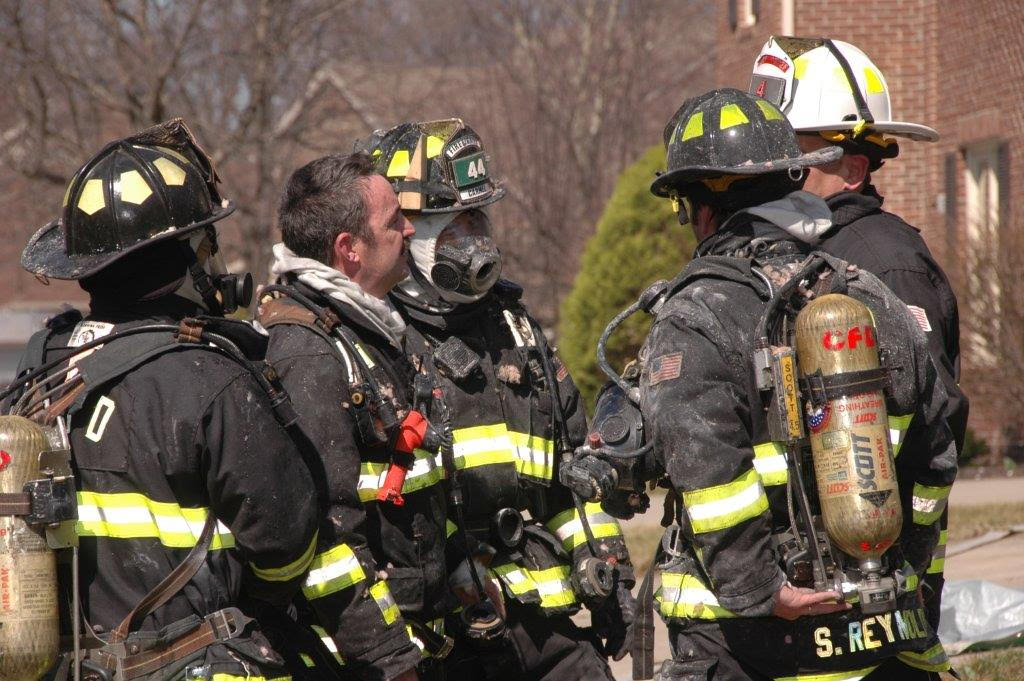 Capt. John Moriarty with his crew after a fire. (Submitted photos)

1989: Received the Distinguished Service Award from the CFD for his life-saving efforts to help 5-year-old Erin Bower Patterson.

2014: Presented the Peer Leadership Award by the CFD, one of highest awards given by the department.

2015: Moriarty and Sparky received the ROSA Award for outstanding service presented by the Carmel Rotary.

Jan. 8, 2018: Received the Pillar of the Community Award from Carmel Mayor Jim Brainard

Jan. 11, 2018: Capt. Moriarty retired after 36 1/2 years as a firefighter and received the Meritorious Service Medal from the Office of the State Fire Marshall