You are at:Home»Current in Zionsville»Zionsville Community»Zionsville’s Thompson to follow brother to Purdue basketball program

“Coach (Matt) Painter emphasized how much he wanted me and I felt at home,” said Thompson, who officially made a verbal commitment earlier this month to play for Purdue. 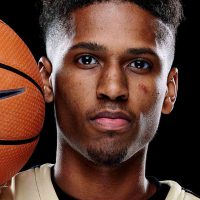 It’s understandable he felt at home because he has been around the program for some time. His brother, P.J., is a senior point guard at Purdue.

“My brother was a big factor in my decision,” Thompson said. “He was real honest with me. The coaching staff was honest with me. I know it’s early, but I felt if that was the place I wanted to be, why not commit?”

Thompson, a 6-foot,155-pound guard, had offers from Butler, Miami of Ohio, Toledo, Kent State and interests from many other programs.

“He came to a lot of practices and games,” Busick said. “He made it clear to Isaiah that they wanted him and needed him.”

P.J. played at Brebeuf Jesuit Preparatory School. Their father, LaSalle Thompson, played for Indiana State and Ball State. The family moved from Pike Township in Indianapolis to Zionsville before Thompson started high school. Thompson has started all three years for Zionsville, which was unbeaten heading into action Jan. 19. Thompson is averaging more than 20 points per game.

“Isaiah has always been a great teammate, that has been his most impressive quality,” Busick said.

Busick said he knew Thompson was talented when he arrived at ZCHS.

“When he came in, he was 5-10 and 130 pounds soaking wet, but he was very skillful,” Busick said. “He passed really well and ahad a really high basketball IQ. What I’ve seen in his progression is his ability to continue to develop his understanding of the game and his physical strength. I don’t think any kid in the state works as hard as Isaiah on his game. After our two-hour practices, he works another two to two-and-a-half hours with his dad, who is a personal trainer.”

Busick said all of Thompson’s strength numbers have improved.

“I think he and his brother and father are continually talking about the game and studying the game together,” Busick said. “It’s important from his development standpoint that he’s watched his brother from an early age.”

With his decision, Thompson will concentrate on sharpening his game.

“I know what Coach Painter wants and expects out of me and when I get there, I’m going to do it,” he said. “At the end of the day, you have to compete for your spot, so that’s what I’m going to do. I definitely want to get stronger so I’m working on that each day. I want to get more vocal. I want to pick up my defensive intensity.”