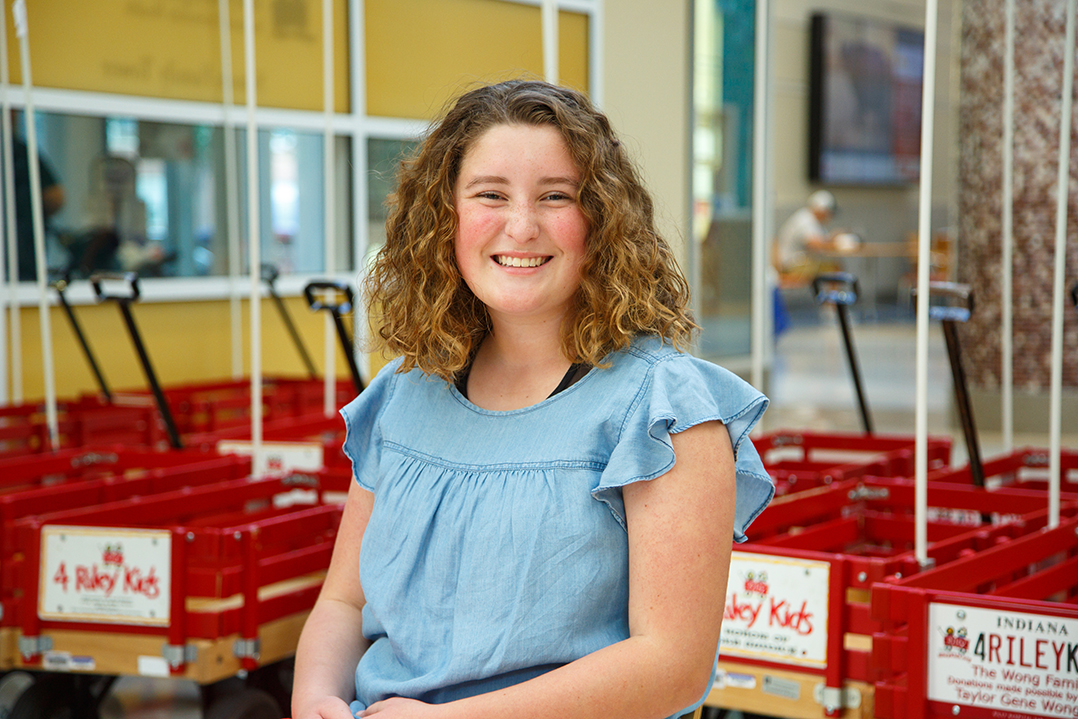 Lizzi Burke of Carmel is a 2018 Riley Champion. (Photo by Riley Children’s Foundation)

Everyday life isn’t as simple for Lizzi Burke as it is for most 13-year-olds.

Diagnosed with cystic fibrosis when she was a week old, the Carmel resident’s daily routine includes two 45-minute treatments to limit the impact of the progressive disease. But she hasn’t let it slow her down, and others are taking notice.

“She told me that (her diagnosis) makes her feel like that’s who God wants her to be, to have it to maybe help other people and be a witness,” said Belinda Burke, Lizzi’s mother.

Lizzi will get that chance as a 2018 Riley Champion. The program presented by Kroger honors patients from Riley Hospital for Children who inspire others and give back to the community while going through their own treatment. They serve as advocates for Riley by sharing their story and raising awareness and funds for the hospital at events throughout the year. 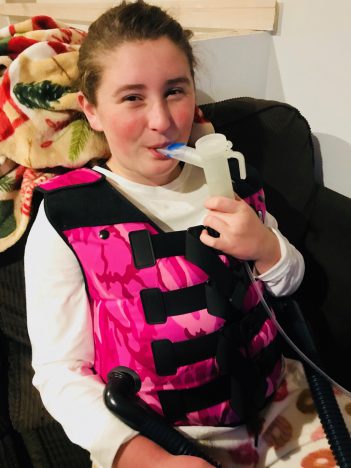 During treatments, Lizzi wears a vest to break up mucus in her lungs while using a nebulizer. (Submitted photo)

Cystic fibrosis causes mucus buildup in the lungs, pancreas and liver. It can lead to lung infections, malnutrition and liver disease. Although there is no cure, there are multiple treatments and medicines to improve the life span of those with the condition.

For Lizzi, those treatments include taking Creon, a pancreatic enzyme, before she eats to help with digestion. She also does 45-minute treatments twice a day wearing a vibrating vest to loosen mucus while using a nebulizer.

“I live like any other kid, just with treatments,” Lizzi said. “When I do my treatments, I get to watch a movie with my brother, so it makes it fun.”

Lizzi also follows the Accelerated Christian Education homeschool curriculum. She said since she began homeschooling about five years ago, she feels like she has made fewer trips to the hospital and can better keep up with her work. 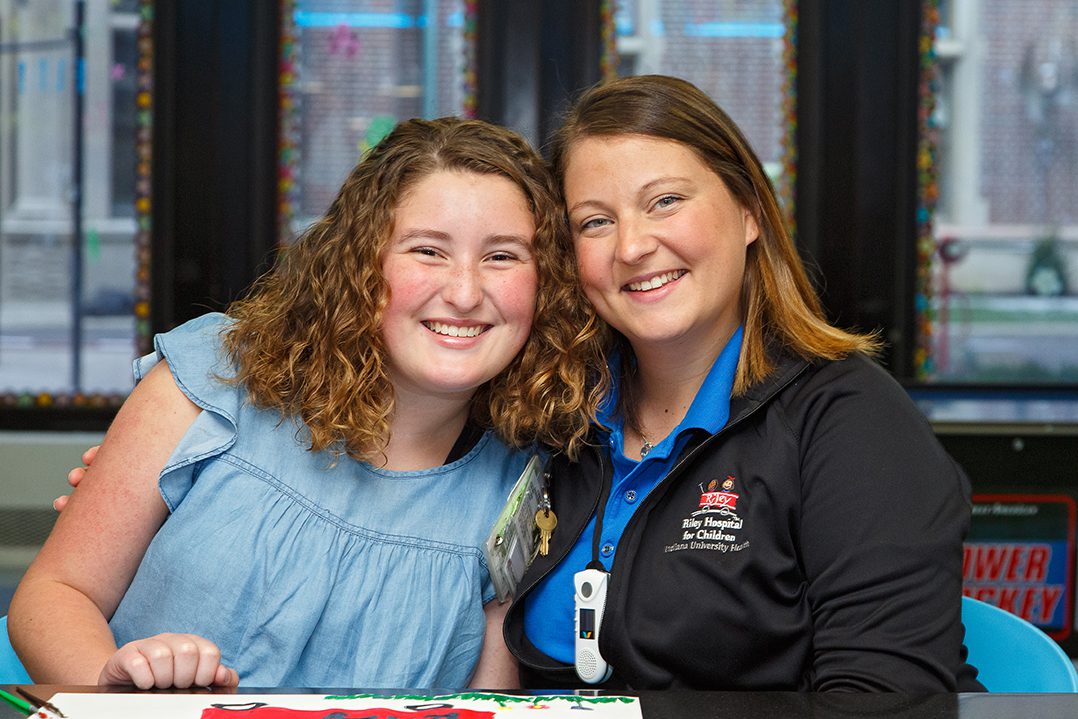 In addition to home treatments, Lizzi visits Riley once every three months for regular appointments. Belinda said they often end up at the hospital during holidays and spent Lizzi’s 13th birthday there with cake and decorations provided by staff.

“It’s my second home, and I get to see all my nurses and all the people there help my stay (be) so much better,” Lizzi said. “It helps me get better and back to my everyday life.”

Belinda said Lizzi always has a smile during treatment and wants to check on everyone else in the room, a quality hospital staff noticed as well, which led to her nomination for the Riley Champion program.

“Lizzi Burke was nominated by several hospital staff members who’ve gotten to know her throughout her treatment at Riley,” said Kate Burnett, senior communications officer for the foundation. “Lizzi was selected because of her positive attitude and her desire to help inspire other kids who are facing similar medical challenges.”

Lizzi said she wants to show children with CF and other health problems that they are not alone and can work through it.

“She’s definitely made me a stronger person,” Belinda said. “She’s my hero.”

The next Riley Champion event has not been scheduled yet, but Burnett said the group plans to attend an Indiana Pacers game. For more, visit rileykids.org/champions. 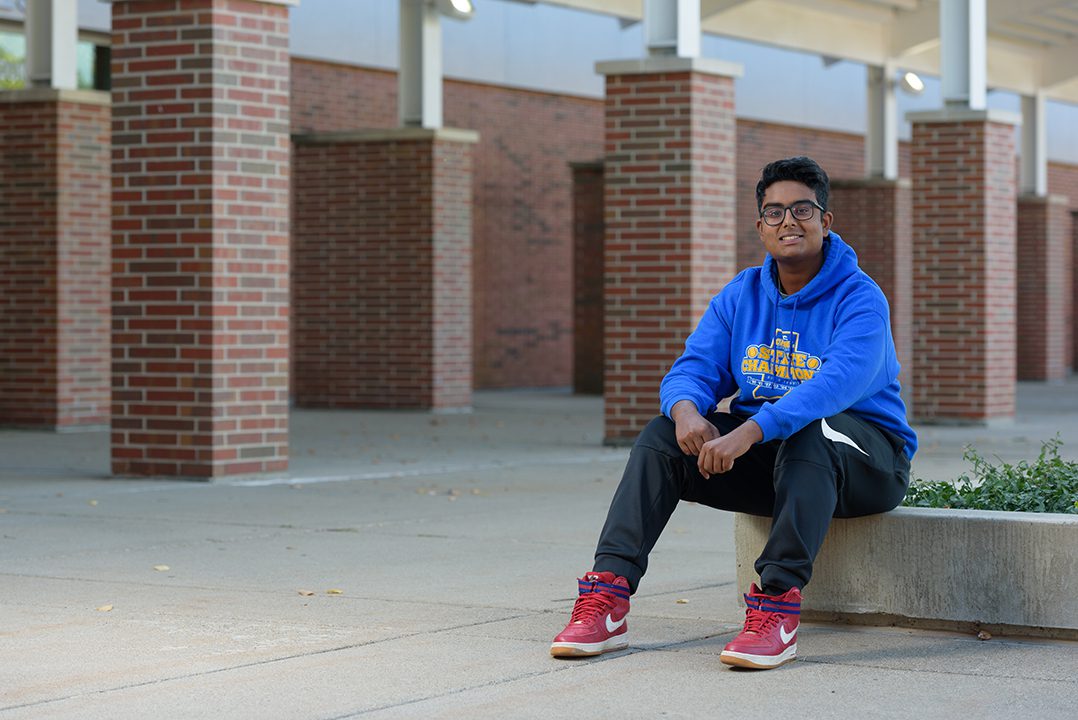 Ritwik Bag of Carmel is a 2018 Riley Champion. (Photo by Riley Children’s Foundation)

Ritwik Bag, a junior at Carmel High School,  also was selected to be a 2018 Riley Champion.

Bag was diagnosed with Crohn’s disease before his freshman year and has been working with Riley gastroenterologists ever since. Crohn’s disease is a chronic inflammatory bowel disease caused by inflammation of the digestive tract.

“The last year has been a little bit tough, especially this school year just from the standpoint that I’m a junior now,” he said. “They always say that increased stress or not as much sleep are triggers for almost anything.”

Bag said he has learned to cope with the disease, so most days he has it under control. He takes medicine and follows a strict diet to decrease the frequency of episodes.

As a Riley Champion, Bag will fill a similar role to one he held last year as the 2017 Honored Hero for the local chapter of the Crohn’s and Colitis Foundation of America. He said he was elated to hear he’d been named a Riley Champion so he could share his story on a larger scale.

“I think the Riley Champion (program) was a lot more competitive and a lot more diverse as we’re not just looking to treat Crohn’s disease, but we’re looking to treat Riley kids in general and make everyone feel better, which I think is an extremely noble cause,” Bag said.

Read more about Bag’s journey in a previous Current in Carmel cover story at youarecurrent.com/2017/06/06/honored-hero-foundation-taps-carmels-rik-bag-to-tell-his-story-of-living-with-crohns-disease/.

Learn more and donate to Bag’s fundraising page for Riley at http://donate.rileykids.org/site/TR/TeamRiley/General?px=1657753&pg=personal&fr_id=3575.