You are at:Home»Lifestyle»Health»Startup led by Zionsville researcher receives $10K to fight pulmonary embolism

Nathan Alves, a Zionsville researcher leading a startup working to find drugs to treat blood clots in the lungs, and his team recently received a boost in their efforts to grow the company. 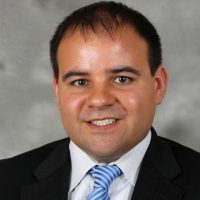 Founded this year by the IU School of Medicine’s Dept. of Emergency Medicine, Indiana Lysis Technologies won third place and $10,000 in the 2017 BioCrossroads New Venture Competition. ILT is a product-based drug discovery company that utilizes nanotechnology to develop therapeutics to treat pulmonary embolisms.

“At ILT we seek to administer active agents via nanoparticles that digest blood clots that largely bypass intrinsic activation of clot digesting proteins,” said Alves, an assistant professor in the Dept. of Emergency Medicine. “This allows us more control over clot digestion in the body, which we believe will greatly reduce off-target bleeding.”

The Centers for Disease Control and Prevention estimates that as many as 900,000 people in the U.S. could be affected each year by pulmonary embolisms, and about a quarter of the time the first symptom is sudden death.

Winning third place in the BioCrossroads New Venture Competition will help ILT – which also includes Dept. of Emergency Medicine professors and vice chair of research Dr. Jeffrey Kline in the role of vice president and chief medical officer – expand its local network as it begins to grow the company.

“It is important to establish a solid team of advisors early on in a new venture to provide for the greatest potential for success,” Alves said. “The money will also allow us to advance the science to be more competitive in future fund raising.”

Alves said being named a finalist and winning third place in the competition was an honor.

“Being in a state that fosters life science growth, such as Indiana, provides unique opportunities through BioCrossroads that is not present in all states,” Alves said.

Alves said the competition is only a first step as ILT continues to commercialize the next generation of safer clot-digesting therapeutics.

“Our next steps are to apply for federal SBIR/STTR funding to further validate the technology and strengthen our position for expansion,” he said.