Pierson is a black Lab and trained  facility dog. He began his tenure with WHS at the start of the school year. He serves in Kim Massaro’s life skills classroom.

“Legally, they’re quite different,” Massaro said of facility and service dogs. “Pierson doesn’t have full access to anywhere in the world, but he does (have access) at Westfield High School, businesses here at the school or school events or in the community doing school things or to maintain his ability in school.”

Massaro can take Pierson on community-based outings, such as to Kohl’s, Kroger and the pet store.

“There’s not much difference, therapeutically. He’s involved with kids in the classroom if they are having a meltdown,” she said.

Pierson was even utilized helping students cope after another student’s suicide.

There are more than 50 actions Pierson can do, such as opening doors for disabled persons, opening refrigerators, picking up something a student has dropped and more. Originally, he was trained as a diabetes alert dog through Indiana Canine Assistant Network, and he still has those skills.

“I have a young man (in class) who’s diabetic and has a private nurse, and Pierson nudged him three times now and we’ve checked (his blood sugar), and it’s been high,” Massaro said.

Pierson has two human parents. Massaro serves as his work mom, and business teacher Becky Sondgeroth serves as his home mom. Sondgeroth takes Pierson to school each day, where he joins Massaro for the day’s work.

At the time of Pierson’s hiring, Massaro had three dogs and didn’t think it would be a good idea to bring in a fourth. Sondgeroth has been involved with ICAN for several years and proved to be a good match.

“I’m highly involved with ICAN and have been for a decade or longer,” Sondgeroth said. “My best friend started it, and I always wanted to get a dog because I see how fantastic they are. I teach college classes (at WHS) and don’t have need, so (Massaro) got involved and we started six years ago trying to get it approved.”

Pierson is the first facility dog at WHS. Typically, facility dogs work as long as they live. 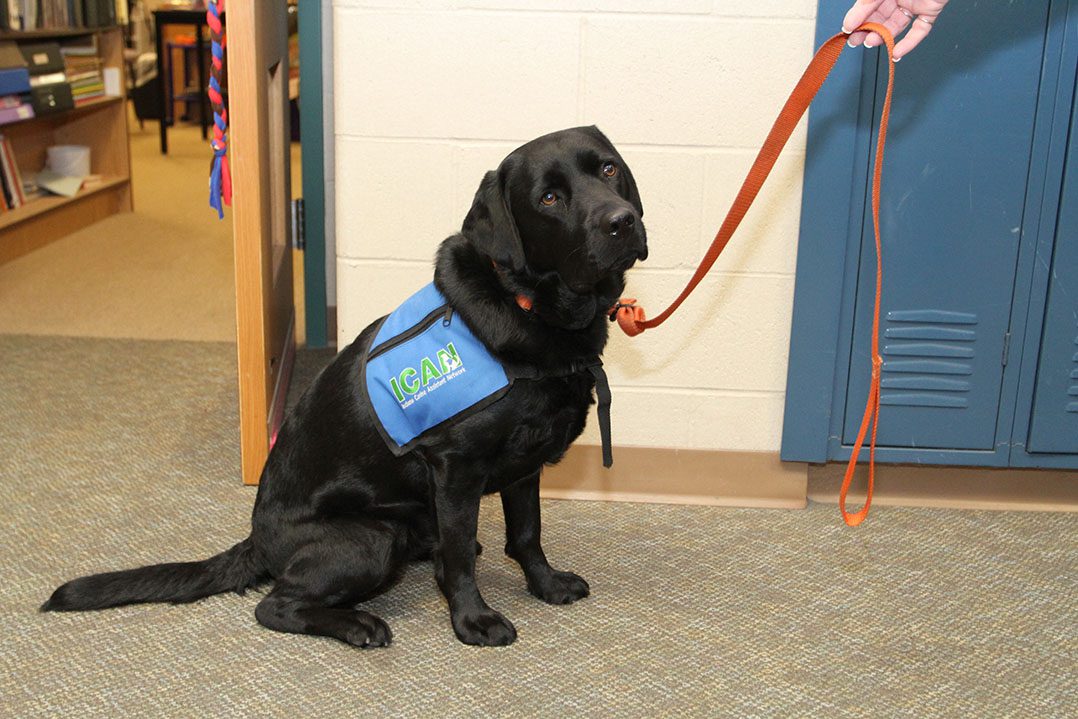 Favorite game: Hide-and-seek with a toy

Favorite snack: Because he is a facility dog, Pierson is on a strict diet. Since he completes actions for rewards, he is only given high-value treats when he is trying to learn a new action.

When he’s working: Students are not allowed to pet Pierson or interact with him in the hallways. “I do respect kids who ask if they can pet him,” Massaro said, even though if Pierson is working the answer is ‘no.’ “When he’s working, you cannot mess with him. Now, my kids can in the classroom (can) because that’s part of his job, to work with kids, but when we are in the hallway, we can’t have the general population pet him unless I release him.”

Training: Pierson will take six months to completely adjust to the new environment at the high school. Twice a year, he and his handler return to ICAN for fresh courses. Prior to working at the school, Pierson spent two weeks at a women’s prison where Massaro and Sondgeroth learned how to train him new actions.