You are at:Home»Current in Geist»Geist Cover Stories»Crafting creativity: Geist artist talks on finding artistic self late in life 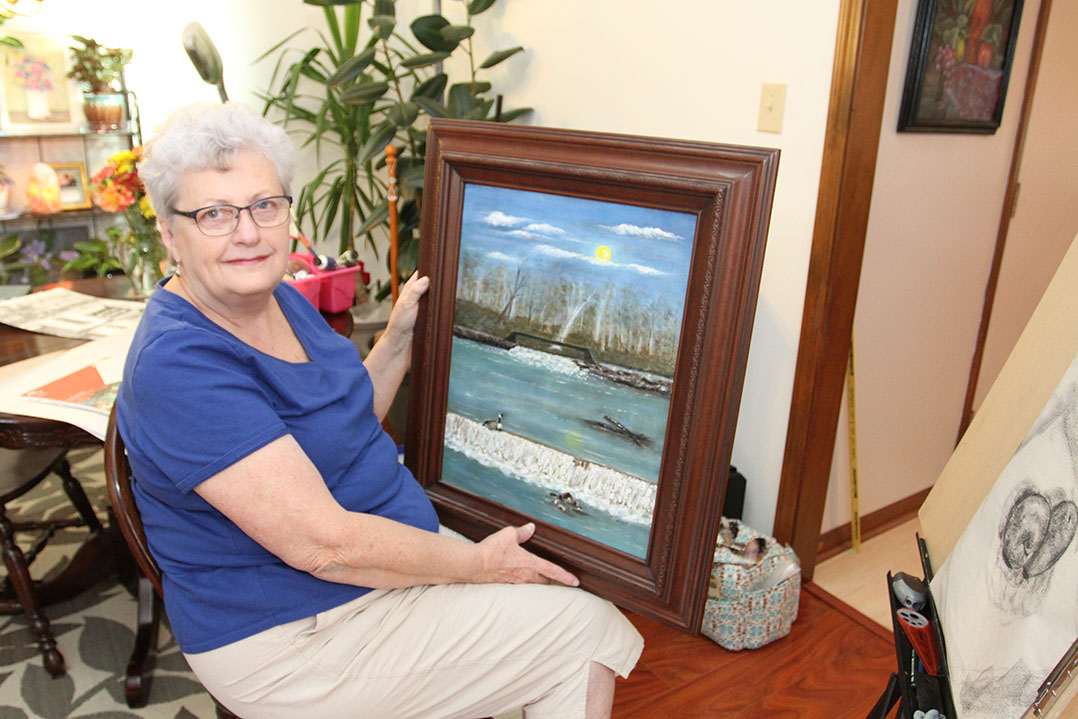 Artist Sharon Robinson discusses how overcoming cancer led her to become the artist she is today. (Photo by Sadie Hunter)

Sharon Robinson is a lifelong artist.

Although self-critical of her ability, her dedication to her crafts, of which there are many, has led to special recognition in the artistic community.

Robinson, 70, said a late-in-life rediscovery of self and art has changed her life to one she considers more social and more community-driven.

Born and raised in Anderson, Robinson and her husband, Doug, moved to the Geist area in March after downsizing from a larger home in Pendleton, where they moved in 1986.

“I was interested in art way back when I was a little girl,” she said. “I’d go down to my grandmother’s house, and she’d tear open a brown paper sack and get out the crayons. As I grew up, I was an introverted child. You could never tell now.”

Robinson majored in art and minored in business but said she decided her senior year to dedicate herself to the business side of her studies.

“Then I got married young, had kids young. But then through the years, the creative stuff didn’t just stop,” she said. “I mean, when the kids were really young, I saw something in the Anderson paper where someone needed help making doll dresses that were going to be given to children in need.”

From there, Robinson didn’t quit. Her interest in creating things – from doll dresses to landscaping projects to jewelry making – led her to become a more prolific artist in general, particularly with watercolor and oil paintings. In the early ’90s, she began making dolls from scratch.

“Right before then, I was diagnosed with breast cancer, 24 years ago. I am a survivor,” Robinson said. “It never showed up anywhere, not on a mammogram, not on an ultrasound, nowhere, but it hurt. I knew something was wrong, and I went with my instincts. Long story short, I ended up having a lumpectomy and 28 radiation treatments. What helped get me through all that process was I was still sewing at the time. The process of creating something new when I was trying to get rid of something that was old and needed to be gone, it kept me going. When things happen, they seem bad, but it opened up new doors for me. It helped make me a different person. It helped bring out this personality that hadn’t shown up.”

In recent years, Robinson’s artistic pursuits led her to her latest passion – working with the Pendleton Artists Society.

“About five years ago, I met a lady at a craft show, and she told me about this new art association that was forming,” Robinson said.

Involved from the start, Robinson has been on the organization’s board for approximately three years and is assisting, along with other members, in the purchase of the building currently serving as the headquarters at 119 State St. in downtown Pendleton.

“The (Pendleton Artists Society) helped me tremendously in finding other people of like mind,” Robinson said. “I’ve done different shows down there, not expecting to win anything or to sell anything. It’s just my personal expression, just like everybody else.” 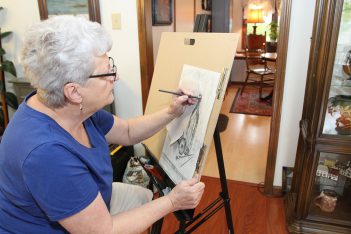 Sharon Robinson works on a pencil drawing at her home. (Photo by Sadie Hunter)

In the past several months, Robinson has continued work on various furniture projects  – including a table and chairs that now sit in the dining room of her home – to keeping up with oil and watercolors and still life pieces that fill the nooks and crannies of her living room, dining room and kitchen.

“My favorite medium, until recently, is oil, but now pencil has become a favorite of mine. It’s very interesting because I wasn’t expecting it,” Robinson said.

“I was in shock,” she said. “It brought tears to my eyes. Second place! I’ve never done that. So many people have this perceived idea that they can’t do anything creative. That’s not true. If you can find something that you really enjoy doing and can zone out about life and the craziness of the world … the more you enjoy it, the better you get.”