As Lindsay Thompson prepared to move her family from North Carolina to central Indiana for her husband’s job change, she relied on the advice of realtors and her husband’s future coworkers to figure out the best place to live. They all seemed to say the same thing: Carmel or Zionsville.

During a whirlwind, three-day trip to the area, the family visited several homes in both communities and settled on a home in the Eagle’s Nest neighborhood.

So it came as a huge surprise to the Thompsons when – more than a year after moving into their home – they realized they lived in Whitestown.

“Our realtor told us this was Zionsville. She took us on a tour of the town and couldn’t say enough about how great living in Zionsville was,” Thompson said. “Whitestown was never mentioned. We didn’t even know where Whitestown was at the time.” 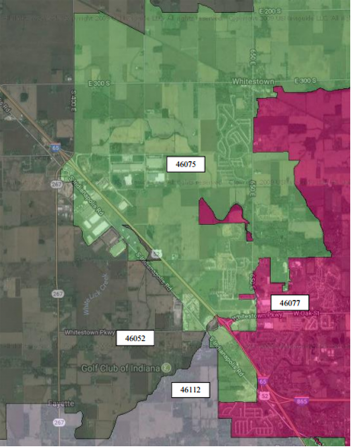 Eagle’s Nest is one of several neighborhoods in Whitestown that does not use Whitestown in its addresses. In fact, the town has four ZIP codes, each with a different city name (Whitestown, Zionsville, Brownsburg and Lebanon). And with the town being the fastest growing in Indiana for several years, more and more residents have the potential to be confused about where they actually live.

Although it may cause confusion for residents, it has led to even bigger problems for some businesses. Whitestown officials discovered this summer that several restaurants in the Anson area – which has a Zionsville ZIP code – had been charging Zionsville’s 1 percent food and beverage tax, a tax that doesn’t exist in Whitestown.

The Indiana Dept. of Revenue is working with Whitestown and Zionsville officials to investigate the problem and identify possible solutions. No one seems to know how much of the tax was inadvertently collected in Whitestown, or if Zionsville will be required to return it, or if taxpayers will be able to get their money back. But Whitestown Town Manager Dax Norton wants to make sure it doesn’t happen again.

Norton introduced a resolution at last month’s Whitestown Town Council meeting that would give him clearance to ask the United States Postal Service if Whitestown businesses can have the option of using “Whitestown” in their address regardless of ZIP code. After making some adjustments requested by the council, the resolution is expected to go up for a vote at the Oct. 11 meeting.

Andrew Caplinger, owner of Caplinger’s Fresh Catch, said he supports the resolution. It was a receipt brought in from his restaurant – that had only been open a few months – that alerted Whitestown officials to the problem.

“I don’t think that this would have ever been an issue if it said ‘Whitestown’ and not ‘Zionsville’ on the address,” he said.

Caplinger said he stopped charging the tax soon after it was brought to his attention. He said that according to the IDOR he should still be collecting the tax, and he said he has heard nothing from the agency about remedying the problem.

Norton said he identified several other Whitestown businesses charging the tax, including Buffalo Wild Wings, Thai Select and the Subway at Circle K.

Although some in the business community support the resolution, many residents spoke out against changing their addresses. The updated resolution removes language from the original version that stated Whitestown residents could change their city name, too.

Thompson said she didn’t think updating the city name would fix the problem for residents.

“I wish that this problem had been corrected before the neighborhood was built,” she said. “If the address had been Whitestown, I’m pretty confident that we would not have bought in Eagle’s Nest since we were set on buying a place in Zionsville.”

Why not give Whitestown its own ZIP code?

Getting a ZIP code boundary changed is not easy.

“Because ZIP codes are based on the location of delivery Post Offices, the boundaries often do not correspond to municipal or perceived community boundaries or identity,” Hargadon said. “We do recognize that this can create problems for those citizens whose mailing addresses do not match their actual city of residence. However, the situation in which delivery addresses differ from legal residency or the local community is common throughout the country.”

The USPS policy on the ZIP Code Boundary review process states that requests “will be considered and every reasonable effort will be made to accommodate them,” although it also states that “realignment of a ZIP Code boundary should be considered only where there are no viable administrative solutions and no unreasonable impacts to postal operations.”

Hargadon said USPS does not keep track of how many ZIP code change requests it receives or how many are granted.

“Although delivery growth and changing demographics can necessitate adjustments to ZIP code boundaries in order to achieve Postal Service objectives, the general stability of boundaries is essential to prompt and accurate distribution of mail,” Hargadon said. 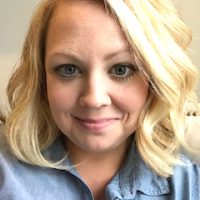 “If our address was changed to Whitestown, I do believe that the number of prospective buyers for our neighborhood would greatly decrease, ultimately affecting and lowering our market value for our homes.” Lindsay Thompson, Whitestown resident with Zionsville address 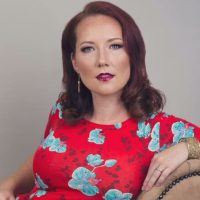 “We thought we were buying in Zionsville, so that’s a bit disappointing. I suppose it really doesn’t change anything, but I do worry how it will affect home values, especially if there is a chance the address and ZIP code could possibly change.” Cristy Kumfer, Whitestown resident with Zionsville address

A 2006 Congressional Research Service report listed various problems caused by ZIP codes not lining up with municipal boundaries. They include: