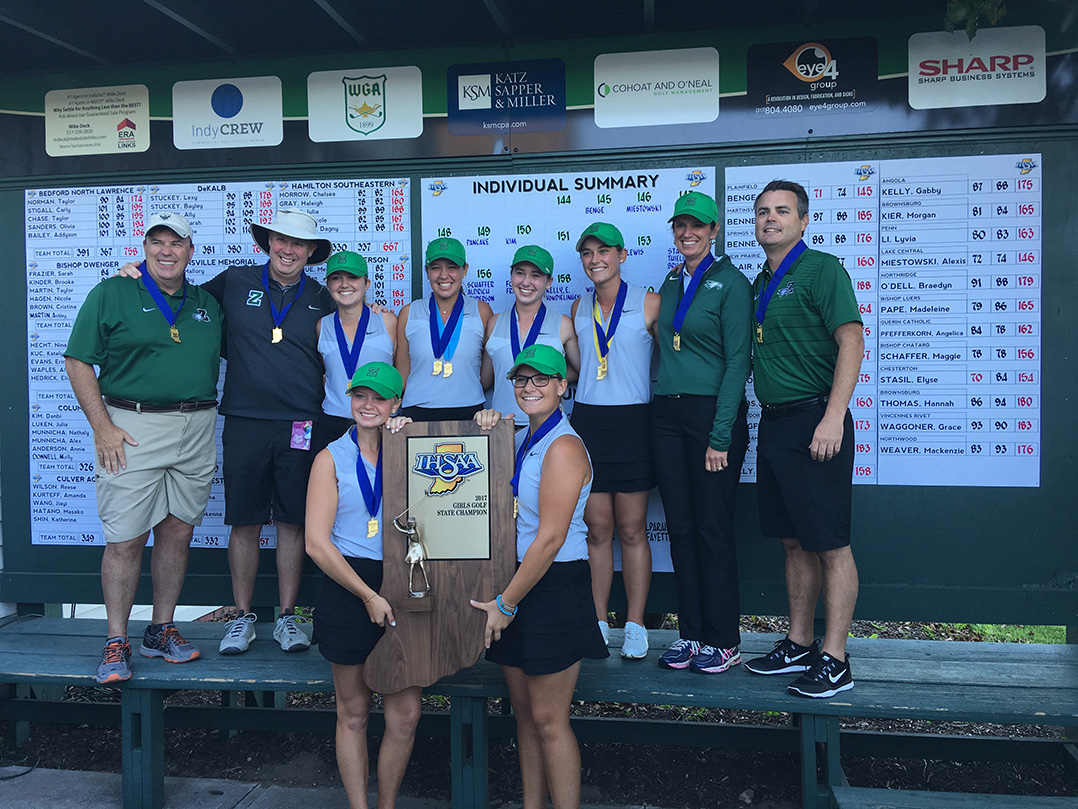 For Zionsville Community High School coach Jeff Anderson, one of the best parts of his team winning the school’s first  girls state golf championship  was sharing the moment with past members.

“It was cool. I saw a lot of familiar faces from the past (Saturday),” said Anderson, who has been the coach for 10 seasons. “It was neat to see parents and former players come back and support the program. It’s a family that we have and we grow every year. These kids have done an outstanding job.”

The Eagles won the title Sept. 30 at Carmel’s Prairie View Golf Club with a score of 620, 18 strokes fewer than second-place Westfield.

“It’s special to get that first one,” sophomore Annabelle Pancake said.

Previously, Zionsville’s best finish was third in 2013. The Eagles were fourth last year.

Zionsville set a state finals 18-hole record with a 299 Sept. 29, one stroke fewer than the previous mark of 300 by Carmel in 2013 at The Legends Golf Club in Franklin.

“They knew they couldn’t be complacent with the quality of opponent of a Westfield and Evansville North,” Anderson said. “They were fully capable of doing what we did (Friday). We had to play our game and stay within ourselves.”

Despite the sizable lead, Anderson said there were concerns.

“We were blowing up the back nine,” he said. “We had double bogeys and triple bogeys. I didn’t know where things were going to fall with the other teams.  We were nervous until the 18th hole. But we were focused and did what we needed to do.”

“Going into (the final round), everybody was saying stay calm, don’t get too comfortable,” Pancake said. “Also, don’t get too nervous. You have to play the game you know. I started off pretty slow. I had a lot of lip-outs. It ended up coming together at the end. It wasn’t my best day, but I had a lot of fun with everyone.”

Although the Eagles will miss those senior starters, Anderson said, “we have a solid core to build around, that’s for sure.”