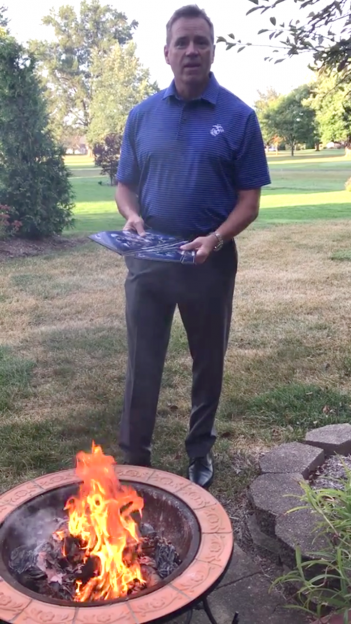 Rodney Heard of Carmel prepares to burn his Colts season tickets in response to some of the players choosing to kneel during the national anthem Sept. 24. (Submitted photo)

Carmel resident Rodney Heard didn’t know if many people would see his Facebook video he posted after some Indianapolis Colts players chose to kneel during the national anthem Sept. 24. The former U.S. Marine and realtor recorded himself burning his Colts season tickets because he said he was offended that some players were not honoring the country and the American flag. There was one person he hoped would see the video.

“I really wanted (Colts owner) Jim Irsay to see it,” he said.

Little did he know that his video would be shared more than 3,500 times from his Facebook page and be viewed more than 157,000 times. And that’s just on his page alone. The story was picked up by many local news stations. Then national sports web sites. Then national news sites. Soon enough, Heard was asked to be interviewed by Fox News.

“I didn’t expect this,” he said. “A big response. It’s been about 99 percent positive. You’ve got a few Internet trolls that try to start a fight though.”

Heard said he’s been a Colts fan since they moved to Indianapolis in 1984. He owned season tickets for a few years in the 1990s. He moved away, but has been a season ticket holder for several years after moving back. He said he’s making a sacrifice by burning the tickets he paid for, but he wanted to make a statement.

“I look forward to the regular season every year,” he said. “I love football, but it’s a matter of principle. I can’t have my dollars go to an organization that disrespects our country.”

Heard said he could have given the tickets to someone else or sold them, but he wanted to make his “own sacrifice” to show his point.

“There’s a lot of people that fought and died for that flag, and to disrespect it yesterday like you did, I’m done,” Heard said in the video.

Heard said he believes people can speak their voice and protest, but not if it is disrespectful to veterans.

“I don’t agree with denying them their right to protest, but it shouldn’t be during the national anthem,” he said.

Heard said he appreciates the stance that the Dallas Cowboys took, which was to kneel before the anthem but then stand as the song was playing.