You are at:Home»Night & Day»Autistic actor Rowe plays autistic character in IRT show
By Zach Dunkin
There’s acting, and there’s reality. Then, there’s Mickey Rowe, an autistic playing an autistic. If there was ever art imitating life, then Rowe’s performance in “The Curious Incident of the Dog in the Night-Time” at the Indiana Repertory Theater is it in all its glory. 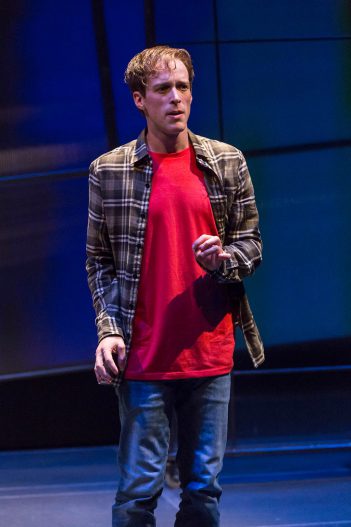 Rowe is the first American actor with autism to play the central role of 15-year-old autistic Christopher Boone in Simon Stephens’ play based on Mark Haddon’s best-selling book of the same title.

During his opening night performance recently, Rowe masterfully brought a treasure trove of emotions – joy, sorrow, pressure, humor, wit, and curiosity – and even athleticism (he’s a skilled unicyclist) to an audience that sat intently silent as not to miss a single word from the actor. Rowe displayed the behavioral traits of hyper-sensitive autistic children, including the screaming and head-slapping meltdowns when someone touched him (his sole concession touching palm-to-palm with his parents). But he also had that characteristic and wonderful inability to tell a lie – “I always tell the truth,” he said several times throughout the production.
The character Christopher has an astonishing brain and is exceptionally intelligent; he’s a math savant who uses his genius to navigate the world.  But he is ill-suited to figure out everyday life. What he can’t relate to is the physical world he lives in, or the human beings he shares that world with. He feels as if he is constantly being challenged by the people who inhabit the real world. “When people tell you what to do it is usually confusing and doesn’t make sense,” he says. “Like when they tell me to be quiet, they don’t tell me for how long.” Or “Imagining an apple in someone’s eye doesn’t have anything to do with liking the person a lot,” he points out, adding that the word “metaphor” is itself a metaphor. It’s innocently uttered gems like this that periodically help the audience manage its own emotional journey.
And when Christopher is alone and scared in a strange place, he hears the advice of his teacher Siobhan, played skillfully by Elizabeth Ledo, whose words help him manage.
When Christopher falls under suspicion for killing a neighbor’s dog with a pitchfork, he sets out determined to find out who really did. That mission turns into a major quest when he quarrels with his father Ed, played brilliantly by IRT regular Robert Neal, who is not a violent person, but as occasional rants of violence he later regrets. Ed wants Christopher to drop the pursuit of the would-be dog killer, and the audience eventually finds out why before Act 1 ends.
Spoiler alert: Christopher also discovers via a few unopened letters to him from his estranged mother (a remarkable Constance Macy) that his father has lied to him about his mother’s death.
Under Risa Brainin’s imaginative direction, an inventive design team allows the audience to enter the boy’s consciousness on his terrifying journey that includes a coming-of-age train trip to London (all the actors speak with an English accent). The chaotic hustle and the bustle of the city and train station in a dizzying scene of the second act puts the audience on equal mental footing with the dazed and confused youth.
In the London scene, Christopher’s senses are shelled by the terrifying barrage of lights (designer Michael Klaers), sounds (Todd Mack Reischman), and projection (Katherine Freer) that imply civilization, and his head is assaulted by the crowds of people played by a mechanically drilled ensemble who talk and shout and never stop moving. Interestingly, the stage even splits briefly to create an underground train track in which Christopher dangerously jumps into to rescue his pet rat.
Scenic designer Russell Methane earns a special nod for his minimalist set that uses movable, translucent panels and simple chrome and glass furniture symbolizing a bed, a bench and a table. With so many moving pieces, one might expect a mistake or two on opening night but there were none (at least none that I saw). Each shift in the moving pieces set the stage for change in the story’s locale.
Unlike musicals, stage production aren’t usually this brilliantly choreographed and animated all the way through by the vitality of movement.
The Curious Incident of the Dog in the Night-Time continues through Oct. 14. For tickets and information, visit irtlive.com or call 317.635.5252.