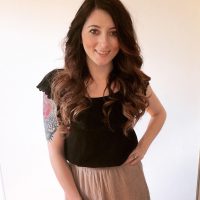 Hoppes attended the U.S. Holocaust Memorial Museum’s 2017 Belfer National Conference for Educators in Washington D.C.  during the summer.  The conference educates teachers on effective approaches for teaching about the Holocaust in a though-provoking and responsible way. The conference also included speeches by Holocaust survivors Theodora Klayman and Louise Lawrence-Israels.

Hoppes said the workshop focused on the perspective of victims and survivors rather than the Nazi perspective. Hoppes met Lawrence-Israels, who was born in a concentration camp just a few days before it was liberated by the Allies.

“It was a very unique experience, and I felt very lucky get to witness it considering how few survivors are left,” Hoppes said.

Hoppes was one of 221 teachers from across the nation to attend the three-day workshop. She was the only teacher from Indiana.

Hoppes said she wants to incorporate literature from the Holocaust into her curriculum in a way that is accurate and respectful to those who suffered.

“You can teach students to be advocates for those who suffer oppression,” Hoppes said. “I wanted to make sure that when I teach the literature of the Holocaust that I can give an accurate historical perspective.”

Hoppes said she enjoyed meeting educators from across the nation as well as the professionals at the museum and the survivors. In the future, she plans to apply to become a conference educator through the museums’ teacher fellowship program to promote quality Holocaust education.